Building a 4X4 is a series of compromises. If you lift the truck and install largertires (as you should), the engine will have a much more difficult time getting the truck moving and keeping it at speed on the highway. That’s OK-steeper gears will make it perform better off road. But who can resist going just a little overboard on the gears for optimum acceleration and off-roading control? Now the engine is screaming down the freeway, and thosebig tires have made the difference between Third and Fourth gear extremely noticeable. 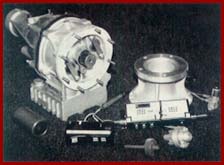 1. The Gear Vendors unit is an auxiliarytransmission that mounts on the rear output of your 4×4’s transfer case. Inside the aluminum case is a planetary gearset that reduces rear driveshaft speed 22 percent when engaged. The GV unit is available for almost every type of transmission and transfer case.

The search to lower our 4X4’s engine rpm

on the freeway is universal. Even owners of stock, late-model trucks with overdrive transmissions lust after lower rpm. But we don’t want to suffer with lackluster acceleration of lose off-road power and control by using high axle gears. That sends us looking for an overdrive to add to our existing package.

2. One of the biggest advantages of the GV unit is that you don’t have to relocate the transmission or transfer case. The front drive-shaft remains the same, as does all of the drivetrain linkage. To begin installation, the rear driveshaft and output yoke is removed.

There are quite a few options, including swapping in an overdrive tranny if your 4×4 doesn’t already have one. But most ways of adding a gear also add considerable cost and complication. Most people install in front of the transfer case (and some in front of a manual transmission), which means you have to move components. Along with that come new crossmembers, custom

3. The rear bearing in the NP205 was retained by the extension housing. This is where the Gear Vendors adapter will go, so a collar is clamped onto the output shaft to hold the bearing in place.

4. The adapter is bolted onto the transfer case first, then the coupler shaft is installed. There should be about 0.005 inch of clearance between the end of the coupler and the face of the adapter. If there is excessive endplay, use the shims provided with the GV unit.

One unit that scores high on strength, simplicity, function, and ease of installation is the Gear Vendors auxiliary transmission. It mounts behind the transfer case, so the rest of your drive-train stays in the stock location. You have to alter only the rear driveshaft. It is engaged and disengaged with an electric solenoid, so you don’t have to cut a hole in the floor or route new shifter linkage. This ultrastrong unit can be used with nearly any transmission-and-transfer case combination. We’ve had one in a 1,200hp, 3,900-pound vehicle for more than two years without a hint of problems.

Next, the GV unit can be bolted to the adapter.The unit adds about 14 inches of length to the transfer case, and weighs about 35 pounds. No additional crossmember is necessary. 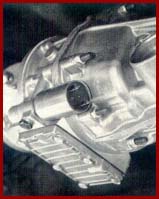 6. The unit is engaged with an electronic solenoid. That means there’s no need for complicated linkage or hacking a huge hole in the floor for another shifter. GV unit offers two sumps. The short one (shown) is best for maintaining ground clearance, while the deeper one holds approximately 20 ounces more fluid for longer intervals between oil changes.

7. The GV unit is controlled manually (with a stickshift transmission) but has an ECM that kicks it out if vehicle speed is below 20 mph. Based on the 4.56 axle gearing and 36-inch tire height, Lin Roberts at Gear Vendors was able to determine that a 39-tooth speedometer gear was needed for a correct speedometer reading. Another tooth on the gear slows the speedo by about 2 Â¼ mph. 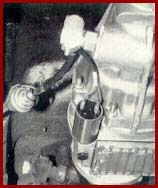 9. A shorter rear driveshaft will be required. Roberts checked the pinion angle and compared it to the output shaft angle at the GV unit. The angles were equal (which is perfect) so the original shaft was shortened 15 inches, but you must measure the distance from the rearend yoke to the output yoke on the overdrive to determine the needed driveshaft length. 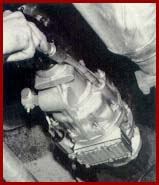 More power and better economy in one modification-that’s the Holy Grail for gear-heads. We’ll admit right now that we didn’t do timed acceleration runs with this truck (we’d need a calendar, not a stopwatch), but we can report from the seat of the pants. Acceleration is improved when splitting gears, which was most evident when hitting freeway on-ramps. A benefit we didn’t anticipate was being able to hold speeds up hills by using the Gear Vendors unit in Third gear (this truck is a four-speed manual) instead of shifting between Third and Fourth.

Economy also came into play, as miles per gallon went from 9 to 10.5. Even though that looks like a small amount, it’s a 16 percent increase.

The greatest benefit for this truck, however, was the reduction in freeway engine rpm. The Gear Vendors unit dropped engine rpm at 70 mph from 3,000 to 2,300. That will do wonders for engine longevity. Plus, the Overdrive extends the upper speed limit of the vehicle. The 3,000-rpm mark on the tach is now reached above 85 mph.

11. A small ECM is mounted inside the vehicle. If you are using an automatic transmission, the GV unit can be programmed to automatically engage and disengage at specific vehicle speeds. The ECM also interrupts the torque converter lockup for smoother shifts, and can be wired into a four-wheel-drive indicator light to keep you from accidentally engaging the GV unit in four-wheel drive.

One big advantage is that it can be engaged in any gear. This lets you split gears, which can make anoticeable difference in acceleration, especially if you’re towing. So you get a 22 percent overdrive on top of your transmission’s top gear, and better acceleration en route to this highway cruising speed. 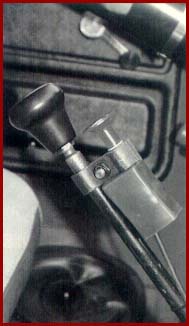 12. The GV unit has a main switch (for automatic transmissions, this switch allows you to choose between auto or manual engagement) and an engagement switch. A headlight-dimmer switch, a shiftknob switch, or an Eaton two-speed rear-axle switch can be used. With a stickshift trans, the Eaton switch is the simplest to use, and it’s cool-looking. 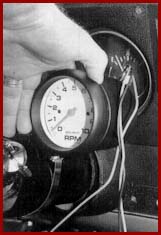 13. An auto Meter 3 3/8-inch Phantom tachometer(PN 5897) was installed in the truck to keep tabs on the engine rpm. The gauge is designed to be dash mounted, so we used an Auto Meter mounting cup (PN 5204) to make a clean installation on the steering column.

We traveled to Gear Vendors to photograph Lin Roberts installing a unit in a stickshift-equipped 4×4. We also picked his brain (and that of Gear Vendors’ owner, Rick Johnson) for

driving tips. Then we conducted our own driving tests to evaluate the convenience,usefulness, and economy gained with the Gear Vendors unit.

The Gear Vendors unit is truly an auxiliary transmission which can be engaged or disengaged anytime the vehicle is in motion. (The ECM keeps you from using the overdrive at speeds below 20 mph, but you are otherwise unlimited.) It can be used to split gears. For example, for less of a jump in gear ratio between Third and Fourth gears, engage the GV unit with the transmission in Third. This allows you to shift your four-speed like a five- or six- speed and keeps the engine in its optimum rpm for best acceleration.

With a stickshift, you should push in the clutch when the GV unit engages.This lessens the impact on the rest of the drivetrain. Engagement speed of the unit is quicker as vehicle speed is increased, so engaging it at 30 mph may take two seconds, while at 55 mph there will be very little lag time between pushing the switch and the unit engaging.

If you have an automatic transmission, you just flip the switch to engage or disengage the GV unit.