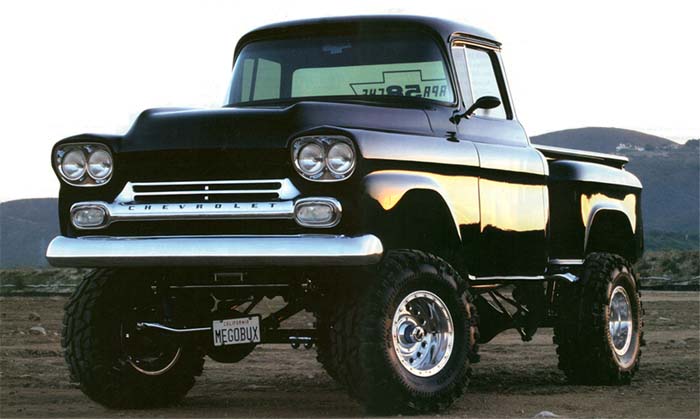 In what may be seen by some as a throwback, this 1958 Chevy Apache might actually be better called a throwdown. With all of the attention being directed to late-model pickups these days, Dixie Brown of San Diego, California, thought this vintage Chevy was a much worthier candidate for liftdom. Of course, that left the question of who would do the work, and Brown had a plan for the Apache that would require a lot of it.
Being based in San Diego, Brown was aware of any number of good shops to be found close to home, one of which was the Street Rod Factory (SRF) in nearby San Marcos. Now, SRF is known for its many hot rods and, more

important to Brown, vintage pickups. A lesser-known fact is that SRF, run by the Lusardi family has a long history of off-road racing. In fact, Dennis Lusardi was a factory Kawasaki mechanic who wrenched for the likes of motocross champion Jammin’ Jimmy Weinert back in the 1970s, and one of his sons, Theo, is a quad racing champion in his own right.
Armed with this knowledge, Brown decided that the guys at SRF had the perfect balance of experience and ability. With the condition that the truck was in, it would take a leap of faith for anybody to think that it could be brought back to good enough shape to wear the black paint that Brown wanted it to be

covered in. But before any thought of the paint job, the crew at SRF had to get the chassis in order. Although using the stock frame, it was fully boxed and equipped with a custom airbag suspension system. A pair of Ford 9-inch housings was given the SRF treatment, which included posi units, 3.71:1 gear ratios and disc brakes on all four corners. Also found on all four corners are identical 16/10 Weld wheels that have been equipped with 35/12.5×16 Thornbird tires. The result is that with the airbags fully inflated, the Chevy now sits about 6 inches higher than when it came from Detroit as a stock 4×4. But that was only the beginning of this build, for what is a

frame without an engine?
And what an engine! It was decided that this truck needed a true classic to provide the power so a 1969 Chevy L88, displacing 427 cubic inches, was found and refurbished. It was equipped with a fully balanced Chevy crankshaft and rods, a set of forged pistons, and L88 aluminum heads. The result is that the compression ratio is a sedate 7.5:1. Why so low, you ask? Well, that is the perfect ratio for a blown engine, that’s why.
A classic engine needs a classic supercharger, so that is why a BDS 6-71 supercharger was the perfect choice for the Apache. A BDS intake manifold was bolted to the block, and in between the big blower and the manifold went a Holley fuel injection system. No simple carb setup for this big rig but a cool fuel injection system

is what administers the good stuff to the cylinders. A K&N air filter gets plenty of fresh air, and an MSD ignition unit adds plenty of spark. SRF built a set of custom headers for the engine, while a March Performance pulley system and a set of billet valve covers complete the look.
So what does Dixie Brown have for all of SRF’s hard work? How about an engine that is producing 600-plus horsepower? It sounds good to us, too. Getting that much horsepower to the drive wheels (remember, there are four of them in this case) is not for the faint of heart and by that we mean that the only gearbox for a rig like this is the fabled Turbo 400. Of course, the one bad thing about the Turbo is its 1:1 final drive gear ratio. They aren’t the best thing for top end. No problem, as the tranny has been fitted with a Gear

Vendors under/overdrive unit. Not only will the Gear Vendors unit add to the top end, but it will also help with mileage and towing capabilities. With the help of Oceanside Driveline in Oceanside, California, which spun up the needed shafts, the connections were made and the truck was readyâ€”for the next step, at least.
That was the body. Now, Brown wanted this truck to look like a truck but also have all the cool things that a hot rod offers its owners. So the crew at SRF gave the Apache a set of suicide doors as well as a cool tilting hood. The front fenders and hood were welded up so they form one pieceâ€”one large piece. With the help of lifts, the entire unit tilts forward to afford the viewer an unobstructed view of the engine. In addition, all of the door corners were rounded off to give the 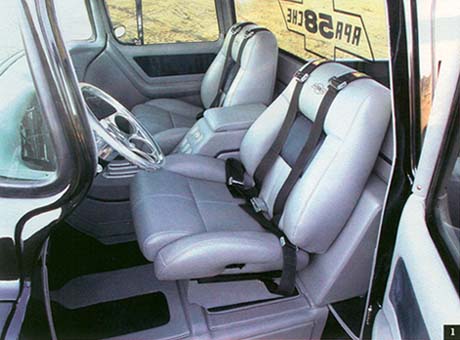 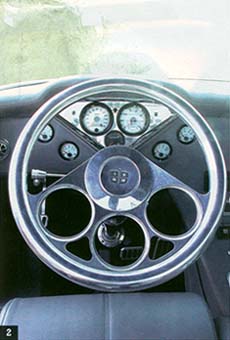 1. A set of Glide Engineering seats, as well as the entire interior, has been covered with gray leather thanks to the guys at N.C. Upholstery of Escondido, California. 2. A polished wheel houses the controls for the interior thanks to a RF horn button that allows Brown to operate the electronics wirelessly. 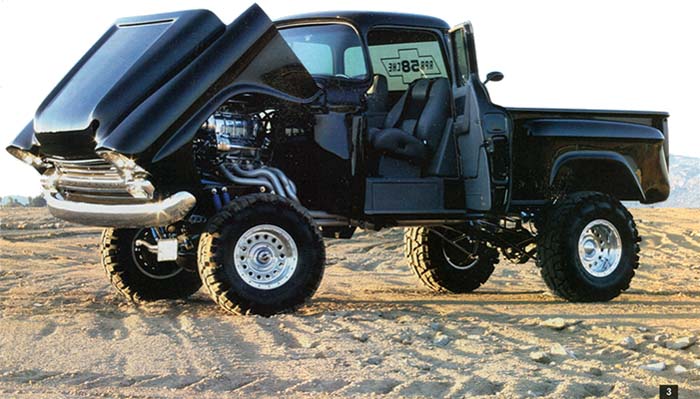 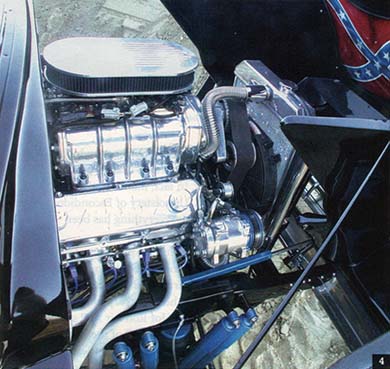 3. This is one super-cool truck. The tilt hood allows onlookers to see the beautifully detailed engine. Suicide doors have also been installed on the truck help give it that true custom look. 4. Power, anyone? The vintage 1969 L88 displaces 427 cubic inches and features a 6-71 BDS blower that is fed by a Holley fuel injection system. The result is that this engine produces a cool 600-plus horses. 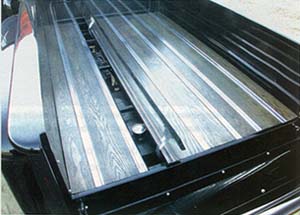 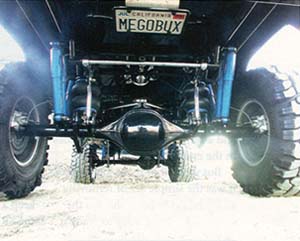 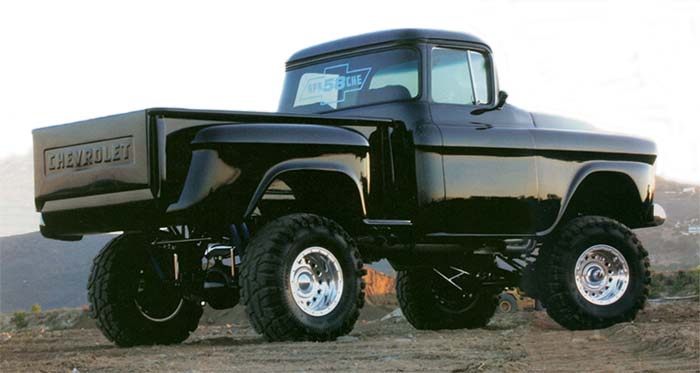 Looking from the rear forward you can actually see how slick this thing really is. A rollpan has been installed and the small window has been cut out and replaced with a large unit.

cab that smooth feel.
Another thing that they did was convert the stock small window cab into a big window. Since they had the welder out, they welded and smoothed all the seams and rounded off the rails of the bed. While back there they added a custom-built rollpan. Speaking of the bed, there is an electric solenoid that opens and closes the tailgate, and a set of LED lights now resides in the ends of the rails.
But with all of those killer mods, it was the simple act of removing all of the many blemishes on the multi-decade-old body to ready it for the black paint job to come. It was the owner who decided that he wanted the truck to be black, black, black, so the SRF crew added blue pearl to the PPG black paint to give it that deep luster he was looking for. The results speak for

themselves, as a mirror seems shallow in comparison to the surface of the truck.
The metal magic continued inside as the SRF crew first smoothed the dash and then fabricated the center console. A full set of VDO gauges was placed in the dash, while a Billet Specialties steering wheel allows the driver to keep a grip on the big rig. To this the SRF crew added a set of Glide Engineering bucket seats, which had been covered in nice, gray leather. In fact, thanks to the guys at N.C. Upholstery of Escondido, California, everything has been covered in gray leather.
Other bits and pieces needed to fill out a complete interior included a Lokar floor shifter, not to mention the black carpeting as well as the Hot Rod Air A/C system. Connecting all of the various electrical is a system that was

wired by the guys at SRF, who used a Painless 18-circuit box. One of the things they wired in was the stereo system, which includes the Eclipse head unit, a five-channel 1,800-watt MTX amp that powers the twin MTX 6-1/2 inch component speakers, as well as the two huge 12-inch MTX woofers.
For a variety of reasons, this truck took the Street Rod Factory crew three years to build, but the effort was worth it. Since being completed in late ’06, this black beauty has taken home a slew of Best of Show and first-place awards for the happy owner. Although this sweet Apache has all the pieces needed to take to the dirt, chances are you won’t be seeing Dixie Brown taking on any major steps, but you can catch him at the best hot rod shows in the Southwest.
4×4