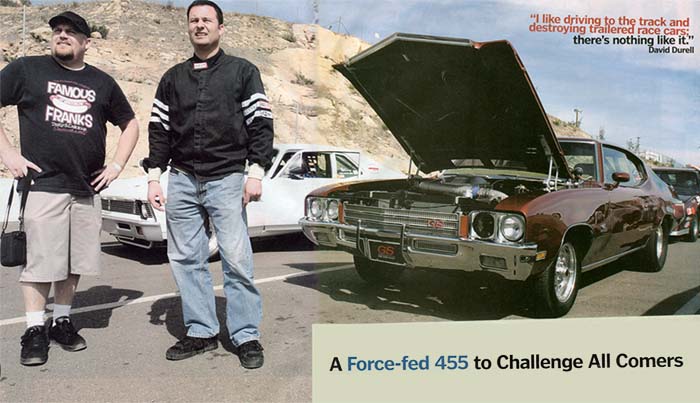 > The Stage 2 package was an over-the-counter option to be installed by the dealership or added later by the owner. It consisted of specific cylinder heads and camshaft, Edelbrock aluminum intake, Holley carb, and 11.0:1 pistons. 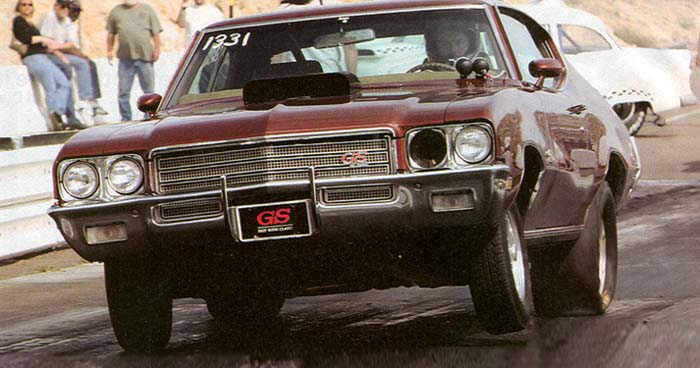 he facility at Barona Speedway is intimate enough that we could see the big brown Buick rolling to the line from our car while we paid the entrance fee. This made us nervous because we knew it was David Durell’s first time back to the eight-mile track since assembling the ’71 GS with its new 455, but even more important, it was his first time out with the new Vortech supercharger. The likelihood of something shredding before it could be captured on film seemed high.
Blow-through systems for carburetors have taken great strides in recent years, allowing carbureted engines to enjoy the benefits of centrifugal supercharging previously reserved for late-model EFI cars. But seeing one strapped to a Buick engine that’s been out of production since 1976 is still intriguing, especially since no one is currently offering a kit to do so. That didn’t prevent David from pursuing the combination, working with Greg “Driver” Sadeau of GES Engineering to design and fabricate the blower moorings and work out the engine combination. And now it was time to try it out.
Moments later, the Buick emerged from the return road, seemingly under its own power and without accompanying death rattles or streams of vital fluid. The sinister grin on David’s face as he hopped out confirmed the success of the first outing, though as we soon learned,

he was already on pass number three. His personal goal for the day, aside from keeping everything together, was to break into the six-second range; in quarter-mile terms, that’s a solid 10-second ride. It hadn’t happened yet, and while David was taking it easy on the launch to safeguard the stock 8.5-inch 10-bolt, the Buick was still listing hard to starboard every time the lights came down.
During a cool-down break, we got the back story of the blown Buick. While the combination is new, David’s relationship with the car is not. Purchased 12 years ago, when David was 22, it was first raced with a stock-ish 455. Soon, pocket-ported stock heads, a small cam, an aluminum intake, and headers had it in the 12s. “The ’70 Stage I cars were good for 13.30s stock, and it’s really not hard to make a standard 455 even better,” he offered, in part to convey the ease with which the heavy Skylark dipped below the 13s. No doubt David’s experience helped the e.t. “I probably had 800 passes on the car before I pulled it apart for this configuration; I used to race it somewhere almost every weekend for two years.” Eventually the Buick saw mid-to-low-11s with another 455 and a small nitrous system. 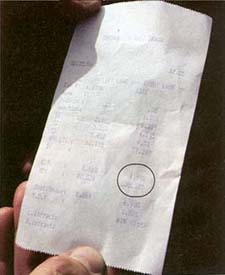 > The exhaust outlet in the bumper were not a standard
GS item, but an additional option coded N25. 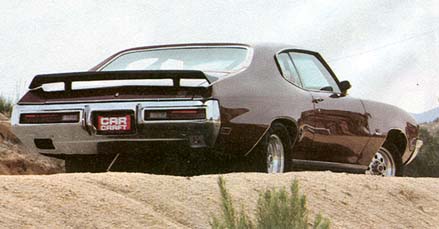 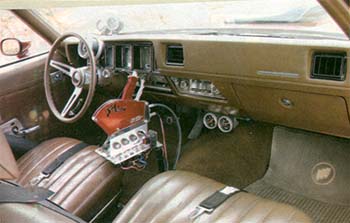 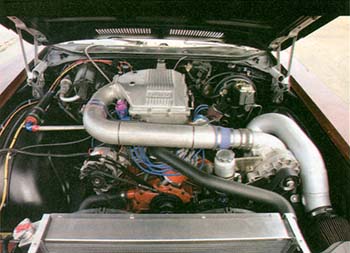 Back in the lanes, the plan is to lean on it just a bit harder during the launch for that extra nudge. When the lights come down, the left front comes off the tarmac, and in a flash, the scoreboard tells the tale: 6.98 at 100.48 mph. Back in the pits, David and bud James Seabrook are pumped. “I’m still not launching off the converter, and it’s pulling like a freight train!” Subsequent runs would shave the e.t. down to 6.94, which according to our conversion charts is a 10.60 or so in the quarter.
“I’m hoping that once I get a rear that can handle it and figure out the tune, we might get it into the 9s and still drive it home,” offered David at the day’s end. The following Monday he’d call to let us know that the lack of boost he’d been seeing on the gauge was accurateâ€”the bypass valve was truck open. In essence, the blower was possibly drawing more power than it was adding. All of this may just mean that a street-driven, nine-second, 4,000-pound Buick isn’t simply possible, it’s probable. 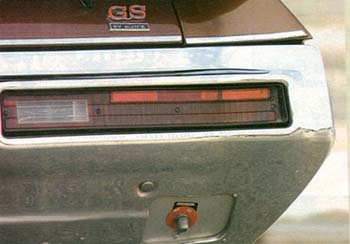 TECH NOTES
What: ’71 Buick GS 455
Owner: Nathaniel David Durell
Hometown: Ramona, California, the sticks of San Diego
Engine: The numbers-matching block was stashed while another ’71 455 block was bored 0.030-inch, deburred, decked, and drilled and tapped for additional head studs. The stock crank was turned 0.010-under and swings Crower Sportsman rods with JE custom pistons that make 8.74:1 compression.
Heads: Thanks to TA Performance in Scottsdale, Arizona, even Buick guys can get aluminum heads. David started with TA’s Stage 2 Street Eliminator assemblies with 2.12/1.81-inch valves and then had Buick head-porting guru Greg Gessler work them over until they flowed 317 cfm on the intake side at 0.500-inch lift.
Camshaft: David didn’t want us to reveal the specs, but we can allow that the custom Crower grind is a surprisingly tame, hydraulic, flat-tappet unit, particularly for a 464-inch engine. We’ll say this: The intake duration is under 240 at 0.050, and the lift barely crack 0.500-inch.
Induction: Here’s where it gets interesting. The intake is a single-plane from TA Performance to match its heads, but forcing the atmosphere in is a Vortech YS-trim centrifugal supercharger. It blows into an enclosure surrounding a Holley 850-cfm double-pumper; a pair of Holley electric “black” pimps keeps it fed. The blower mount was designed and fabricated by Greg “Driver” Sadeau of GES Engineering in San Diego.
Exhaust: A set of Jet-Hot-coated TA Performance headers with 2 1/8-inch primaries and 3 1/2-inch collectors feeds into a custom 3 1/2-inch system that terminates just before the axle with a pair of Race Magnum “bullet” mufflers. In spite of this, the Buick really isn’t that loud.
Transmission: The ’71 Buick Turbo 400 was built by DRW Transmission in Santee, California, and fitted with a 3,200-rpm, 10-inch converter from Art Carr. Hanging off the back is a Gear Vendors overdrive unit, providing 0.78:1 in any gear at the touch of a button.
Rearend: The rearend is still the original 8.5-inch “corporate” axle assembly with 3.73:1 gears and even the stock axle shafts. A TA Performance aluminum support cover helps keep the guts inside.
Suspension: Up front, the Buick remains basically stock right down to the springs, though the sway bar is gone and a set of Competition Engineering 90/10 drag shocks has been added. In the rear, BMR lower control arms work with stock uppers mounted to “no-hop” brackets to locate the axle. Each stock rear spring has an airbag inside, and QA1 shocks provide tunability.
Brakes: Stock front disc/rear drum brakes remain in service.
Wheels/tires: Weld Draglites are used at all times: 15×5-inch in front mounting 205/70-15 tires and 15×8-inch in the rear with Mickey Thompson ET Streets in 28×12.5-15 for the street. Another pair of 15×8 Draglites mounts Hoosier 29×10.5W-15 slicks for serious track days.
Body: When David bought the Buick, it was wearing a black-and-white. ’70 GSX paint scheme, but in time it was returned to its factory hue of Burnished Cinnamon. The original ram-air hood is stored, while a standard Skylark hood was modified to accept the repro Stage 2 scoop. The GSX wing on the trunk is also repro.
Interior: Everything that the Buick left the factory with is still inside the car, alone with a six-point rollbar and a Precision Performance Products shifter on a custom bracket. END