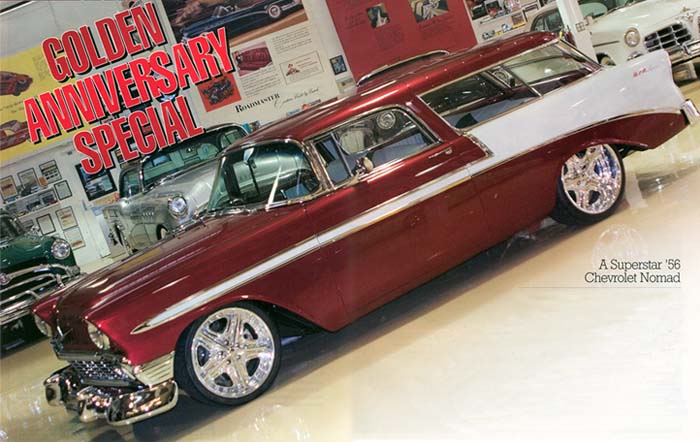 ust about any gearhead would be thrilled by the opportunity to work with legendary automotive collector and all-around funny guy Jay Leno. Dave Killacker, owner of Performance Transmission in Azusa, California, not only had the opportunity to work on a number of Leno’s projects, but along the way he’s developed a friendship with the late-night TV host. It’s a close enough friendship that Leno teamed with automotive designer Chip Foose and his “Overhauling'” TV show to completely transform his rusted-out ’56 Chevrolet Nomad. So yes, you did read this correctly; Dave Killackey is indeed one of the luckiest car guys on the planetâ€”he’s friend with Jay Leno, and he owns a ’56 Nomad that has been overhauled by Chip Foose and the rest of his team. 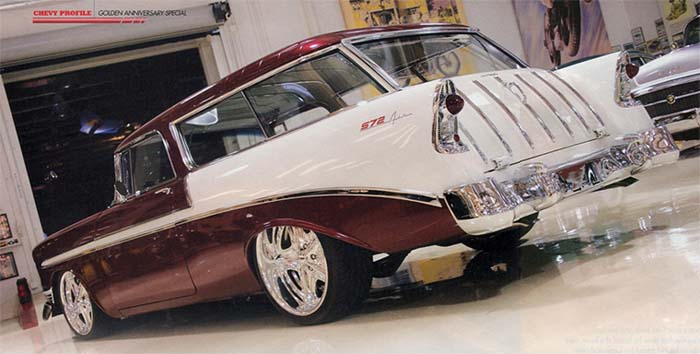 We had the chance to meet up with Killackery, Leno, Foose and Ed Golden (of Ford design) at Leno’s Big Dog Garage to shoot Killackey’s car and bench race with quite a group of car guys. This Nomad is the first collaboration between Foose and Leno, but Leno was very quick to give Foose all of the credit for this masterpiece.

Before Foose and the “Overhaulin'” team got their hands on the Nomad, it barely ran, was full of rust and had its fill of rodent droppings, as is typical of cars stored for long periods. But, after a week with the “Overhaulin'” gang, it is a gorgeous red and white showpiece with heart of a monster. The car is powered by a GM Performance Parts 572 Chevrolet big block.

The “Overhaulin'” team straightened the body and repaired the rust, including replacing the 50-year-old rusted floor with all-new metal from CARS. Then, the team at Sal’s Auto Body Shop laid the two-tone paint that caries through into the interior with the painted dash, steering wheel, door trim and amplifier end caps. After the paint, the next thing that most people notice are the big Foose wheels, 19 inches in the front and 20s out back, both wrapped in low-profile BFGoodrich g-Force T/A LWD tires. If you peek through the highly polished spokes, you’ll also catch a glimpse of the four-wheel disc setup from Baer Brake Systems, complete with slotted and drilled rotors and PBR calipers. To make sure that the 50-year-old Nomad handles as well as it looks, the A-team installed Heidt’s Hot Rod Shop high-performance suspension components, so Killackey can carve corners with the best of them.

Under the Nomad’s smooth birdless hood, you’ll find the envy of every Chevy enthusiast, the impressively powerful 572ci Chevrolet big-block crate motor from GM Performance Parts. The 572 is even fit with Mike Hamm custom one-off headers that connect to the MagnaFlow dual exhaust system to give the Nomad an authoritative Chevy rumble each time the beast is fired up. The stout powerplant is coupled to a Turbo 400 transmission that was prepped by Bowler Transmission to handle all the grunt that the 572 can supply. A Billet Specialties serpentine pulley system ensures that the big block won’t have any of those belt-throwing habits of V-belts from the past.

Like the rest of us, Killackey’s dream engine was the

572, so Foose made his dream come true thanks to Guaranty Chevrolet. Killackey had his dream engine and transmission built to handle it, but he wanted more than three gears, so when the pranks were over and the car was returned to him, he turned to the gear experts at Gear Vendors, where they installed one of their Over/Underdrive units to give the ’56 six forward gears, perfect for cruising the big Chevy to local shows. Also, there’s no need to worry about the Gear Vendors unit behind all that power as it can withstand more than 1,200 hp.

Killackey’s dream car looks just as good on the inside as it does on the outside thanks to a fully functional factory-looking interior built by A&M Auto Upholstery. The interior is the Nomad replacement interior, available from CARS, in a nostalgic white and black color scheme. Even though the ’56 boasts a high-performance audio system, you’d hardly notice by looking at the interior. Not only does the interior look cool, but thanks to a Vintage Air A/C system, it stays cool, too, and retains that ’56 vintage look. 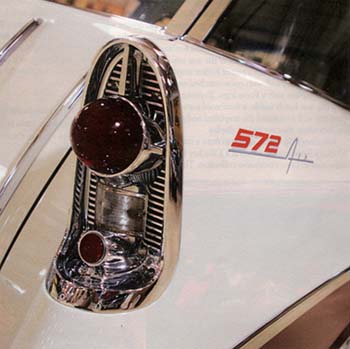 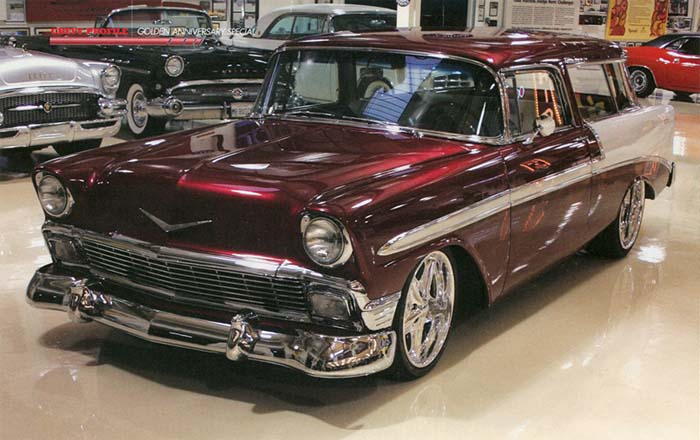 The pros from Golden Customs in New York flew out to install the tunes in the Nomad, starting with a layer of Dynamat sound-deadening material throughout the interior. This was to eliminate road noise and vibrations in the sheet-metal. The crew from Golden Customs integrated the Pioneer CD receiver in the dash of the Nomad behind the factory glovebox door, so it can be operated from the driver’s seat but is also concealed to preserve the factory appearance. In front, kicker speakers are installed in the molded kick panels to give good sound quality without interfering with the nostalgic look and functionality of the car. In the back, a pair of 8-inch Kicker subwoofers are integrated into the side panels next to each side of the rear seat. Power for the sound system comes from a pair of Kicker amplifiers that are molded into the spare tire well with color-matched end caps and cosmetic bridge, complete with a Foose logo. To maintain a clean look and keep the rear hatch usable, a reinforced panel folds flat over

the spare tire well to conceal the amplifiers and protect them from prying eyes when they are not on display.

Killackey’s ’56 took inspiration from a car in Leno’s collection, a ’55 Buick Roadmaster, which is Killackey favorite among the many cars in Leno’s extensive collection. The Buick features the very first 572 crate motor that GM built and has had Killackey drooling since the first time he heard the beast rumble to life. Now, thanks to his old friend Jay Leno and new friends at “Overhaulin’,” Chip Foose has made Killackey one happy dude with a 572 of his very own. Even more than the GM Performance Parts 572 Chevrolet engine, Killackey has an amazing ’56 Chevrolet Nomad wrapped around it. The tail end of the Nomad’s first 50 years was obviously pretty rough, but looking at it now, you’d never be able to tell. It will no doubt weather the next 50 years in fine shape. CR 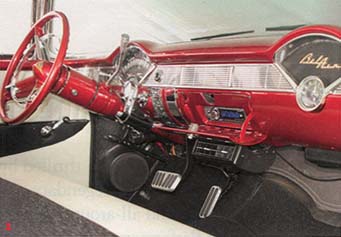 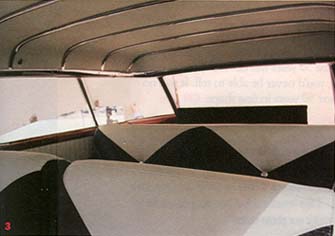 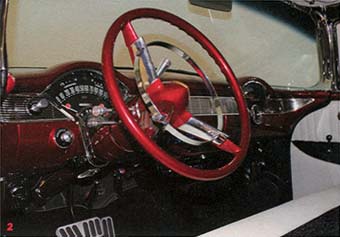 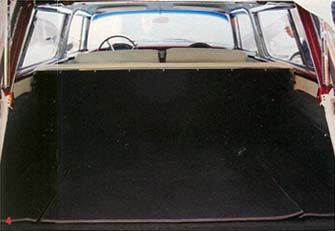 1 The ultra-clean painted dash meets with necessary modern amenities, like the Vintage Air A/C and heater system and Pioneer CD receiver. The driver-side molded kick panel housing Kicker speakers can also be seen here. 2 This is one seat that anyone would like to occupy. The tilt wheel makes it easy for Killackey to enter and exit the Nomad, and the billet pedals with rubber inserts will keep the beast under control. 3 A&M Auto Upholstery carried the black and white theme throughout the Nomad’s interior. 4 Now you see it, now you don’t; Golden Customs installed both Kicker amplifiers in the Nomad’s spare tire well. They are concealed and protected by the hinged cover. 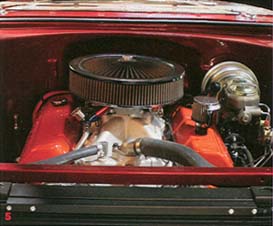 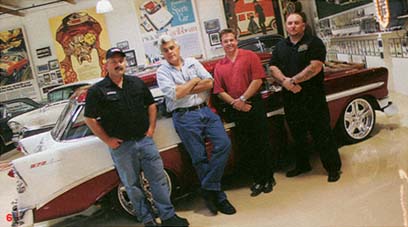 5. The venerable GM Performance Parts 572 big block fits tightly in the engine bay thanks to some custom firewall work by the “Overhaulin'” crew and Mike Hamm custom headers.6. Dave Killackey, Jay Leno, Chip Foose and Ed Golden took a few minutes of their busy schedules to get together one more time for our photo shoot.