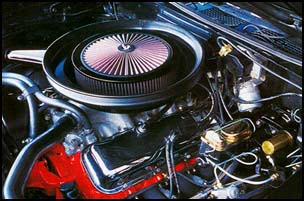 The original 396 (402) big block was pulled out in 1990 and replaced with an LS6 454 crate engine. Jim O’Neal trucked the engine over to a machine shop and had it blueprinted, then upgraded it with a Comp solid cam. It’s been going strong for almost 15 years, with little more than regular maintenance.

drive this car everywhere!â€ Jim Oâ€™Neal told us. Thatâ€™s the whole point of owning an automobile, isnâ€™t it? Yet in a hobby overflowing with four-wheeled garage art, that particular point is frequently overlooked.
What we found interesting was that Oâ€™Neal made this statement not while we were asking him how the car handles and performs, but when we first approached him about photographing the El. He seemed to be under the impression

that real driven cars aren’t the kinds of rides that make it onto the pages of a magazine. Then he proceeded to point out flaws, mainly a couple of small stone chips and a radiator shroud that got zinged by the fan because the motor mounts weren’t up to the task. Big deal.
We spotted his 454-powered Camino at Year One’s Briston show, and saw O’Neal driving hard on the autocross cone course, the dragstrip and around Bristol’s famed short track at 80-plus mph all weekend long. That’s exactly our kind of car. After assuring him we weren’t pulling his leg and that the car would indeed photograph very well, we arranged to shoot it the following morning. He shook our hands and headed off for another lap around the speedway.
O’Neal found the original 325hp 396 ’70 SS in 1987, while stationed in Seattle with the Navy. The car was candy maroon with white stripes, and for $4,300 it became his primary transportation until 1991. After getting out of the Navy, O’Neal moved to Ohio and continued driving the SS. In the spring of 1990, he ordered a 454 LS6 crate engine, which cost only $2,700, and the slow transformation was underway.
Before dropping the big block in, he invested another $650 to have the engine balanced and blueprinted at Jim Raoar’s machine shop in Radner, Ohio. Key engine specs include 10.25:1 compression, rectangular port heads, a solid Comp cam with 0.595-inch lift/294-degrees duration, and a stock, GM dual-plane aluminum intake with 750cfm HP Holley carb and K&N air filter. Ignition is provided by an MSD system with Hooker 2-inch Super Comp headers feeding into huge 3-inch Torque Tech mandrel-bent pipes and Walker Super DynoMax mufflers.

“That’s been 14 years ago and the engine still runs strong,” O’Neal reports.
The original TH400 trans was rebuilt with Kevlar clutches and an 11-inch 2,600rpm Breakaway torque converter and shift kit by TCI, all put together by Ed Wasserbeck in Prospect, Ohio. Strapping the car to a chassis dyno registered 370 hp and 390 lb-ft of torque at the tires.
In 1990, O’Neal repainted the car ’99 Saturn Blue with pearl by J.B. Howalt in Springfield. The amount of bodywork required was pretty minimal. O’Neal kept the car in such good shape over the years that the only trim he needed to replace was the door handles and wheel well moldings. His whole approach to the El Camino has been to keep things straightforward and simple, and the interior is no different. It’s pretty much stock. The bucket seats have been re-covered in Black vinyl, new carpet was installed, the dash was cleaned up, and Auto Meter gauges and an Alpine stereo were added, then he called it done.
Okay, it’s a clichÃ©, but as long as you own a car, it’s never really “done.” Between 1990 and 2001, O’Neal ran 4.56 gears in the rearend, running rpm that would make most of us wince. In 2001, he installed a Gear Vendors over/underdrive unit and 3.73 gears.
“Wow! What a difference!” he said. That made Understatement of the Year for 2001.
A stock ’70-anything isn’t worth much in the way of cruising by today’s standards, so a performance rebuild of the suspension was obviously in order. In 2002, the El Camino was treated to a chassis makeover. One of the first steps in getting the car to react better was to more solidly connect the body to the chassis, using a set of Energy Suspension polyurethane body mounts. For the front, O’Neal started with a pair of Hotchkis big-block 1-inch lowering springs. He

removed an additional half coil from them, resulting in a 1-3/4-inch total drop, with the added benefit of a firmer feel. A Hotchkis 1-1/4-inch hollow sway bar complements the springs perfectly, keeping the El Camino flat through the corners. Because it’s a fine line between “firm” and “harsh,” he uses OEM rubber bushings in the control arms and Edelbrock IAS shocks to keep the line distinguishable.
At the other end of the suspension, the original 12-bolt rear was fitted with 31-spline Moser axles before being hung with a full complement of Hotchkis components, including adjustable upper and lower control arms, lowered springs, 1-inch sway bar and Edelbrock shocks to finish the suspension.
After getting the car to handle and enjoy higher speeds with a friendlier rpm, it was obvious the brakes needed some attention as well. So in 2003 a quartet of Baer Tracker 12-inch rotors was installed, along with a hydroboost master cylinder from Hydratech Braking Systems. After bolting up a set of 17×8 American Racing Torq-Thrust II wheels and BFGoodrich G-Force T/A tires, we can only imagine what a difference the last three years has had on driving the El Camino.
Over the years, O’Neal has put thousands of miles on this El Camino, driving from one end of the country to the other, going to the track and running 12.50s at 105 mph, autocrossing, and probably doing just about anything else he could think of to enjoy it. About the only thing lacking now is air conditioning, and that’s probably on the agenda this year, since El Camino is seeing almost as much street time as it did when he bought it back in 1987.
But that certainly isn’t stopping him. Five minutes after we clicked the last picture, he was on his way to the dragstrip—and then through the cone course, and around the Speedway, and after that … CR 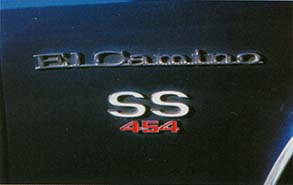 1 The interior is almost totally stock, right down to the vinyl seat covers and horseshoe shifter. The only upgrades are Auto Merger gauges and a decent stereo. 2 Here’s a good tip for people running big brakes: a 14-inch rim usually won’t clear them, so finding a spare tire can be a problem. Rather than go without and hope for the best (or rely on AAA and a cell phone), O’Neal found a 16-inch space-saver spare from a full-size Chevy SUV. It’s even the same height as his BFGoodrich 17-inch tires, so if he ever needs to run it on the rear he won’t burn out his Posi clutches. 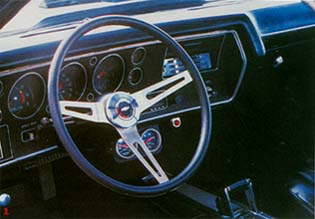 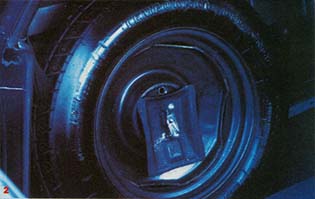