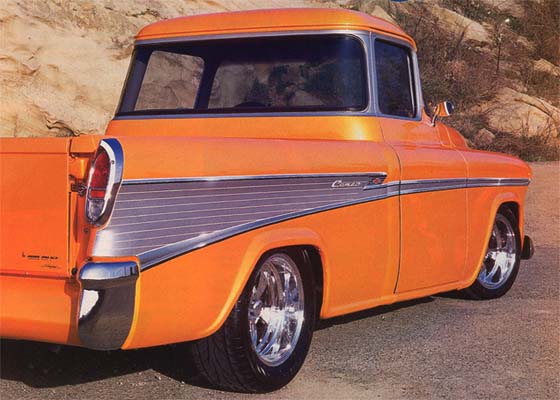 If you’ve ever spun a wrench on a classic truck project, you know what it’s like to have visions of the finished product dancing in your head. You may be string at a pile of crusty old parts, but in you mind’s eye you picture yourself cruising down the street enveloped in the glow of gleaming paint and the roar of a healthy engine. It’s that vision that keeps you going as you trudge through months of cutting, grinding, welding, fitting, and knuckle busting. In the end, you know all the hard work will pay off.

Or will it? What happens when you finally get that prized project on the road and discover that it isn’t exactly the truck of your dreams? After seven years of construction on his ’57 Cameo, Roger Hamamura faced that difficult question. Built as a resto rod-a basically stock white exterior with a TCI-built chassis and 454-inch engine-the Cameo was a clean comfortable cruiser,

and by all account it was very well built. But it just didn’t have that extra something-that striking visual impact-that roger had hoped for.

Whether by coincidence or kismet, Roger stumbled into a solution shortly after being confronted with his dilemma. While attending the Goodguys meet in Del Mar he met Randy Haapala, whose Sunset Pearl and back ’56 Chevy Bel Air convertible had a crowd around it all weekend. As it turns out, Randy owns The Body palace, a body and paint shop in Huntington Beach, California. Through several conversations during the weekend, Roger concluded that Randy was the right guy to help him transform his Chevy from an also-ran into an attention-grabbing showstopper. Soon after the show he was at Randy’s doorstep dropping off the truck with instructions to “do something.” 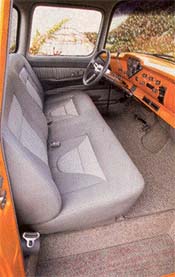 It’s important to note that when Randy does something, he goes all the way. It was no different with Roger’s ride. Randy’s first move was to commission artist Steve Stanford to pen a few sketches of the pickup. Stylin’ Steve’s final rendering showed a cleanly shaven version of the Cameo that featured another iconic visual cue from 1957-Bel Air-style side trim. Steve also warmed up the color, bathing the truck in the same House of Kolor Sunset Pearl hue that Randy’s ’56 wears. One look at the illustration was all Roger need to give Randy and his crew the nod to begin work.

The Cameo’s makeover was made easier by the fact that it was done well the first time around. Aside from removing emblems and filling a bunch of holes, the body needed minimal work. Swapping the hood for a smoother ’55 version (without the bumps and chrome spears) was probably the most significant change. Further smoothing came from shaving the bumper and reworking the rear by shaving and aligning its end caps and reworking the center section to resemble a rolled pan Conveniently enough, the existing white paint served as a good base for the new hue, allowing it to glow like its namesake. Steve Stanford finished what he’d started by airbrushing on the new “trim.”

Roger felt the inside deserved some extra attention, too. So the truck was sent to one of the best stitchers around, Gabe Lopez at Gabe’s Street Rod Custom Upholstery. Gabe reworked the late-model Chevy seat extensively before covering it in tow-tone gray leather, then he crafter a set of door panels to match. The paint on the dash is the same as what’s on the body, and it’s accented quite nicely with a polished ididit column, Grand wheel, and Heneline instrument panel.

The balance of the truck remains as it was in its first incarnation, with TCI coilover front and rear suspensions, LS-6 big-block motivation, and a B&M Turbo 400 linked to Currie 9-inch rearend. The biggest change on the chassis is the rolling stock, which now consists of 17-inch Intro wheels wrapped in Falken rubber. Ed Miller (also in Huntington Beach) helped refine much of the truck’s mechanical workings, as did the crew at Street Machines by Stedman (Hemet, California).

The makeover took almost a year, but a totally different Cameo rolled out of The Body Palace this spring. With its vibrant color, fine detailing, and bold new attitude, nobody’s going to consider this classic Chevy stodgy or boring anymore. Better yet, when Roger daydreams about a weekend cruise, this is the vision that will be dancing in his head. CT