When I set out to build “Copperhead” on “TRUCKS! TV,” there were two main reasons for doing it. One was to show the incredible potential of the ’67-72 GM trucks as a project and how anybody could build one up to fit their budget and style. The second was to take a different approach on the whole “sleeper” idea. I have seen a disturbing trend happening for a number of years. You would go to a show or a cruise, and a bunch of guys would show up with these bad-looking rigs on trailers with big blowers sticking out of the hood. Then they would proceed to fire it up, back it off the trailer into the parking spot, and shut it off! What the…? Is that what this is all about? That sure as heck wasn’t the kind of hot rodding I grew up with! So I decided that I would build this truck to look like a show truck so people would see it and say, “Wow, that is really nice, very clean, tastefully done classic truck. Too bad it’s not very fastâ€”my Lightning will take it,” and then really blow their mind by uncorking that sucker and leave them standing in a cloud of smoke, wondering what in the world just happened! You can have both show AND go, and the whole purpose of Copperhead, including the name, was to prove just that. 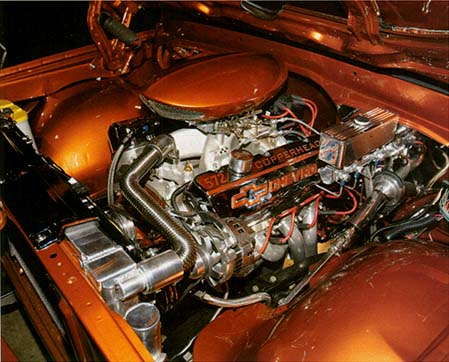 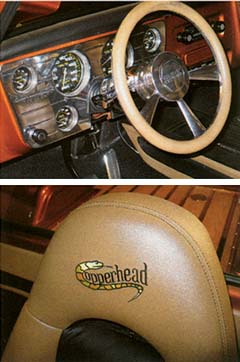 Most people will agree, (even hardcore Ford guys) that the ’67-72 GM trucks have a fantastic body style. Especially the ’67-68 with their clean grilles and slant noses, and since the ’67 is my personal favorite, a ’67 was what it was going to be. One of the big plus factors of building one of these trucks is that there is so much available for them from the aftermarket. You can literally start with a frame and a cab and build a truck. Since the purpose of the “TRUCKS! TV” show is to show viewers how to work on trucks, I figured that was a great place to start: with a frame, a cab, doors, and a title.
The chassis was the first stop. The

beauty of building a truck from the late 1960s and 1970s is that their suspension technology isn’t too old. It is pretty much the same as what you will find under a brand new truck, so all you really have to do is upgrade it. That is what I did using all new components from Early Classic Enterprises. These parts also treated the truck to a 3-5 drop to get the stance right where I wanted it. 17-inch Colorado Custom Lazear wheels wrapped in Toyo Proxes rubber not only give a modern hot-rod look, but it’s also easier to find racing slicks for a 17-inch wheel, and you KNOW why that is important!
The engine is the Chevy ZZ 572

crate engine, rated at 620 hp on pump gas, and most people know that this is the very first 572 engine that GM Performance let out the door. The whole 572 deal is pretty interesting because at the time I had planned on putting a 502 into Copperhead. However, when I contacted GM Performance, they dropped the bomb when they said, “A 502 is fine, but we are secretly developing a 572ci, 620hp crate engine to kick everybody’s ass.” Number #001 showed up at the shop in the non-descript blue crate, and then two days later, after painting and detailing it, I stuffed it between the framerails of Copperhead.

To control that tremendous amount of power and get it to the ground, I backed it up with a built B&M Turbo 400, followed by a Gear Vendors overdrive to get the extra gearing for racing and highway driving. Then finally, I stuffed a huge DTS Dana 60 in the rear because I needed something that could handle the power and not blow into a million pieces when I stomped the pedal.
When it came to the body, this is where the ’67-72 Chevy really shines. It is such a clean, nice design that I don’t think it needs a lot of modifications; just some minor tweaks like shaving the driprail, filling the seam across the back roof of the cab, filling the stake pocket holes, and removing the Bow Tie from the center of the grille. As far as actual body parts? Well, I didn’t have any, but

that wasn’t a problem because the aftemarket is packed with original and custom parts for these trucks, and I wanted to get that point across to the viewers. I made a call to Early Classic Enterprises and started ordering: bedsides, oak bed floor kit, tailgate, lights, hinges, hardware, hood, one-piece door glass kit. You name it, I got it. With the body parts all rounded up, it was time for paint. I got together with PPG and we created a special copper/orange color especially for this truck. Then I shipped it off to Kevin Tetz at Paintucation where he meticulously smoothed out the body inside, outside, and underneath and then laid on the flawless paint. I spent the next two or three weeks assembling the body and getting everything to fit right. Even after you pre-fit everything before paint, there is 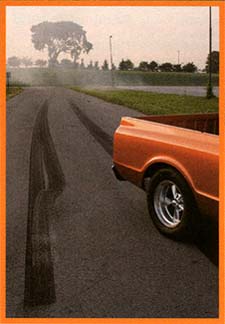 a lot of time involved in the final assembly stage. I wanted to really drive this point into viewers’ heads because this is where a lot of people get in a hurry and screw up a really nice rig by doing hackwork in the final stages.
The interior came together next, and once again I used as many parts from the aftermarket that I could to show people what kind of choices were out there and hopefully encourage them to think outside the box. There is a nice blend of street rod, original, and custom parts that all work together to give me a simple, classic look but with enough custom touches to make it very unique.
The 150hp nitrous system was hidden under the intake manifold by Bottle Blown Racing, and to keep things really sneaky, the nitrous controls, gauges, and bottle were hidden in the center console, which was built by Kevin Lindamood at Heavy’s Customs. Another thing I put in that console was the control for

the electric exhaust cutouts that I got from Doug’s Headers. This allows me to dump the exhaust right behind the header collectors, and I have more fun with this feature than almost anything on the truck. The Copperhead guitar is the result of a collaboration between the Gibson Guitar custom shop and myself. It is one of three custom guitars we are doing to go hand-in-hand with some of the trucks I’ve built on the show “TRUCKS!” If you want to check ’em all out, go to www.gibsonguitars.com. Obviously, there are a lot more products that I used on Copperhead that we couldn’t mention here, but you can get a complete listing of this or other projects I’ve done on the Web site, www.stacydavid.com.
One of the coolest things about the Copperhead project goes back to one of the main reasons for doing it: to get people excited about doing their own project truck by showing them how to do it, and what kind of parts are available to help them do it. That way a guy or girl can build the style of truck 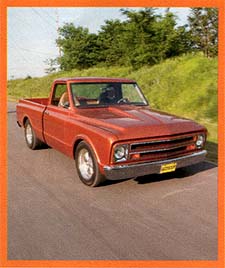 they want according to their budget and skill level and be proud of it. Old, classic trucks are cool, and there are thousands of old Fords, Chevys, Dodges, etc., sitting around waiting for someone to go to work on them and create their own version of Copperhead. So what are you waiting for? Get to it! Which reminds me, I need to make a call on an old ’56 GMC I saw sitting out in a field the other day.