t last it has all come together. You have the right truck, the right stance, the right paint and interior, the right amount of horsepower, and even the proper approval from your better half. You’re a real road warrior, and with your wheel in hand and your foot on the gas, the highway miles pass by effortlessly…or are they as effortless as you think? What about your driveline – is it out of sight and out of mind? With a mega-cubed engine pushing high horse and torque numbers, a stock driveline will essentially constipate the full potential of your engine. It’s true that GM has built some of the toughest rock-crushing trannies in the automotive world, but as time progresses, these transmissions age. As technology evolves and gas prices climb high into the stratosphere,making some serious improvements to your car’s cruising potential will rise to the top of the to-do list.
If you’ve got a T-400 transmission that needs replacing, or any GM Tranny, for that matter, we have got a killer combination you should see. During the hottest time of the year, we found ourselves in Phoeniz, Arizona, at the Hughes Performance 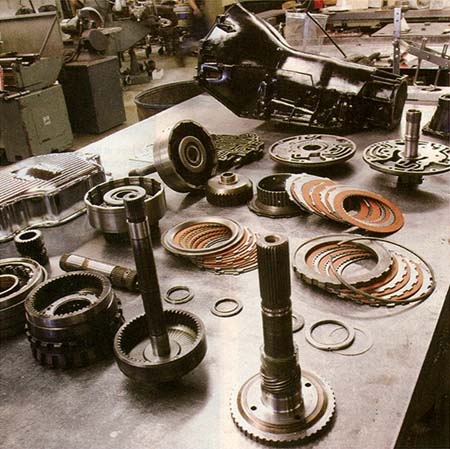 Here are the innards Hughes uses in their high-performance transmissions. We don’t expect you to do this at home.

headquarters. If you’re not familiar with Hughes Performance, let us fill you in on what they do. Since 1971, Hughes has been involved with racing, and specifically with transmissions. Not limiting themselves to just racing applications, Hughes Performance builds transmissions for all types of applications, whether it is street, strip, or towing; if they don’t have a transmission to fit your needs, it does not exist. If you were to put a Hughes T-400 in your vintage GM truck, here’s what you would get:

If you combine the rock-crushing transmissions that Hughes can build and add a bulletproof Gear Vendors Under/Overdrive unit, not even Kryptonite can break this killer combination. Now that you are familiar with what Hughes Performance has to offer, let’s take a look at what advantages a Gear Vendors unit can add. A Gear Vendors unit essentially splits your transmissions gears. With this overdrive unit attached to an automatic three-speed such as this T-400, you now have a six-speed transmission. Virtually all three-speed automatics have the same ratios within a few hundredths (2.5 First, 1.5 Second, 1.0 High). This means your transmission takes 2.5 engine revs to turn the driveshaft once in First gear, 1.5 in Second, and is direct-drive 1:1 in High gear. Gears are multipliers of torque, and since the math of horsepower is torque x rpm /5,252 = hp, then putting a 2.0 gear between First and Second is going to keep the torque multiplication and engine rpm both high, which means more horsepower getting to the rear wheels. If we can then put a 1.2 gear between Second and Third, and an overdrive gear beyond Third, we have a close ratio six-speed overdrive trans with four underdrive power gears, a direct drive High gear and an overdrive cruise gear. Thus, Gear Vendor’s Trademark Under/Overdrive can be used to double the underdrive performance ratios and provide overdrive cruising economies. Neat huh? Let’s take a look at how easy this killer combination can come together. CCT 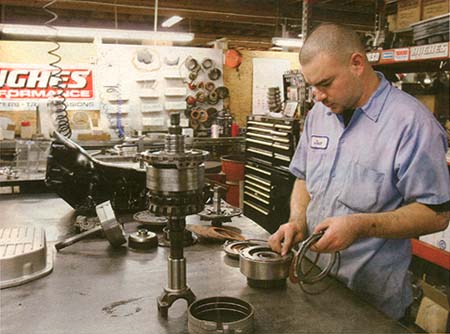 Hughes Performance and their skilled technicians do this kind of work, day in and day out. Watching this transmission go together in an hour made my head hurt. There is no way that most of us could do this on our own. 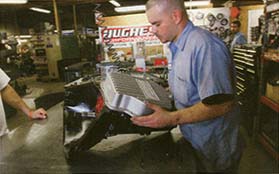 Like we said, after an hour the pan was being installed and this gear-grabbing T-400 is ready to ship out the door, except we are going to add the Gear Vendors unit to this T-400. 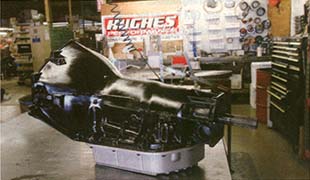 Take a look at the completed tranny. If you notice the tailpiece is missing, that is because the Gear Vendors unit comes with one specifically for this install. 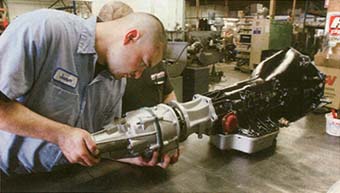 After you open the Gear vendors box (and read the instructions), it’s simply a matter of connecting the dots. Once we put on the new tailpiece/adapter, our skilled expert then added the Gear Vendors Unit. 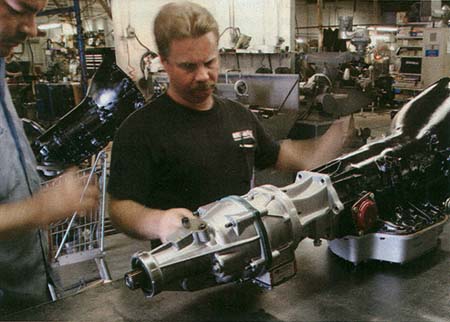 Make sure everything lines up and it’s nearly quitting time. 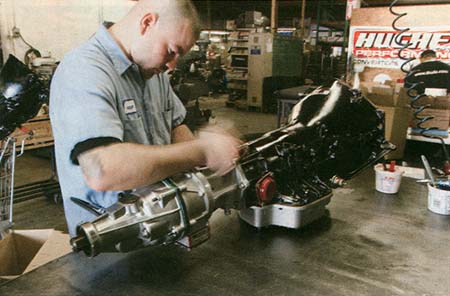 Now we just had to batten all the bolts down. In this shot our tech guy Juan, is giving the tailpiece bolts the once over.

A nice cutaway shot shows the entire Gear Vendors unit and all its internals. 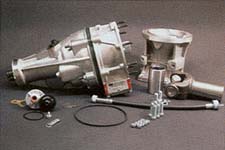 Here is what you get from Gear Vendors. 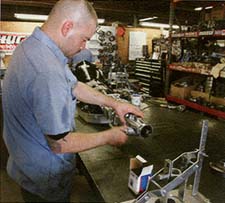 Next, we added the Speedometer connecting cable. 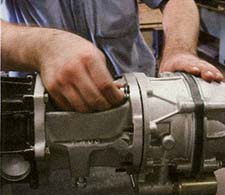 Finally, the tailpiece and the Gear Vendors unit are bolted together. Keep in mind this is merely a bench install, and putting the unit behind a vintage truck’s trans is easy.