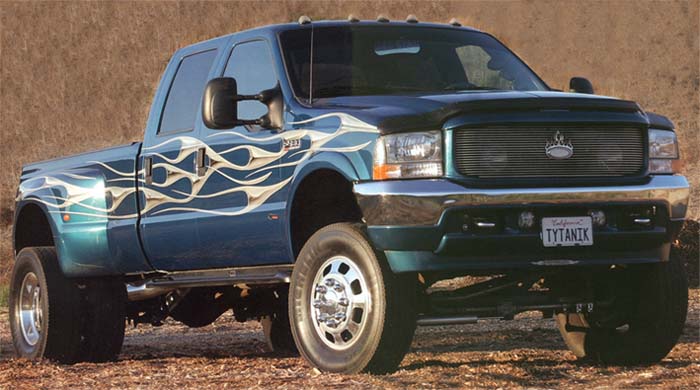 WHEN THEO HANSON SETS OUT TO BUILD A TOW RIG, HE DOESN’T MESS AROUND. HANSON IS THE OWNER/OPERATOR OF 6TH SENSE STUDIO, WHERE DESIGNS FOR THE LIKES OF RED BULL. IN ADDITION, HE’S DESIGNED A GAGGLE OF HOT RODS AND HARLEYS (YOU KNOW, IN HIS OFF TIME). HANSON HAS A CAR COLLECTION THAT INCLUDES THE PREVIOUS WORLD SPEED RECORD HOLDER FOR THE MODERN BEETLE AT 202.87 MILES PER HOUR, AND A NUMBER OF PRODUCTION SPORTS CARS.

That is why he needed a big truck, to get not only his toys to their intended destination, but his various work projects as well. He chose to buy this 2002 Ford F-450 crew cab dualie.
When it comes time to move his various projects, Hanson is safe in knowing that the 7.3-liter Power Stroke engine is capable of nearly anything he will need. Note that we said nearly, which is why Hanson upgraded the big Ford with a Flip Chip from Bully Dog. The Flip Chip allows Hanson to dial in the right amount of power for the job at hand. If he is pulling a trailer full of heavy rock crawlers he goes to the max, but if it is just his bike

trailer, on which he hauls his custom Harley, then the axle-wrapping torque that the Flip Chip can muster may be a bit too much. Either way, Hanson has the right power for the job, and it takes only the turn of the Bully Dog knob to get it right. One thing that the Power Stroke likes is a good supply of air, so Hanson installed an AFE Power Elbow tube and air cleaner assembly. He also added a larger exhaust system to ensure that what is taken in can get out just as quickly.
As much power as the engine can produce, if the gear is wrong it is all for naught. That is why Hanson installed a Gear Vendors under/overdrive unit. The

Gear Vendors unit, with its activation switch right there on the gear shift, allows Hanson to pull even the longest grade with ease, as he is always able to put the big Power Stroke right in its sweet spot. He also added a LUKS clutch. Hanson says that the LUKS is the toughest clutch he has ever seen, and it has taken all of the abuse he has put it through. He says that he has never had a problem, even though he adds with a laugh that he has worn off the rubber on his back tires more from spinning them than from actual road wear.
One of the more obscure modifications to the truck was the fact that he actually tossed the stock bed and

added one from an F-350. But a 350 bed won’t fit onto a 450, you say. Well, you’d be correct; however, Hanson had Mark Brink of Brink Designs take the 350 bed and lengthen it to fit the 450. Why? Hanson says that he likes the 350 bed better, and besides, why not? Once Brink had done the job, Hanson had him paint the entire truck island blue and add the distinctive flames. Infused into the flames are a series of small images that are hard to see at first, unless you look very closely. No two are alike, and they range from evil faces to a scantily clad woman to a truck launching off a jump. There is even a tree, albeit a spooky one. 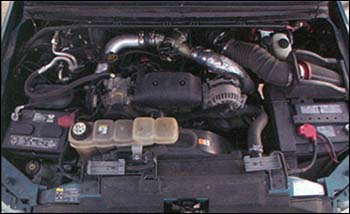 Though admittedly not much to look at, the Power Stroke does the job very satisfactory. It has been enhanced with a Bully Dog Flip Chip as well as an AFE Power Elbow tube and air cleaner assembly.

Dual Doetsch Tech remote reservoir shocks and a hydraulic bumpstop keep the frontend planted even during the most unpleasant events.

“Big in” means that “big out” is needed, so a gigantic exhaust system has been installed. 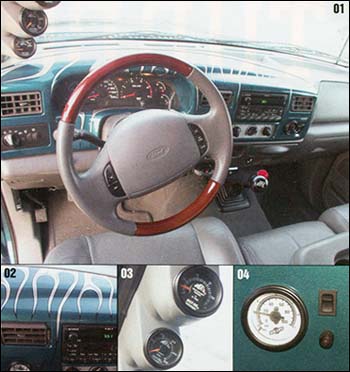 1. This is not your grandfather’s work truck. The interior of the Ford is plush enough for those long hauls that Hanson pulls for both work and play. 2. The dash has also seen the touch of the talented Mark Brink, as the killer flame job adorns the dash and the upper console. 3. A host of Bully Dog gauges has been mounted into an A-pillar pod to keep Hanson apprised of the inner workings of the Ford. 4. Air is only a button-push away, as the Air Lift controls and a pressure gauge have been mounted into the dash.

The stout chassis on a 450 is more than capable of withstanding a jump or two, but Hanson wanted his to be able to do that and more. So he added a pair of chromed ladder bars that are held up with the stock springs, but they also get a little help when towing with the addition of a set of Air Lift airbags. Doetsch Tech remote reservoir shocks have been added to the front, and they are held in place with a new shock tower, where a hydraulic bumpstop also shares space. In addition to the Air life bags, a set of the

Doetsch Tech shocks also adds to the stability of the rearend. The truck rolls easy thanks to the Michelin rubber on all corners.
The interior of the big Ford has come a long way in the past few years. In the past, trucks such as the 450 would be sparse, to say the least, but now they are outfitted like luxury vehicles, which is what these big haulers have grown into. This is why Hanson chose to simply add to the looks of the interior rather than to customize it. To that end, he had Brink do a little custom painting on the dash and

upper console to match the look of the exterior. He did add some things to keep an eye on the Ford, such as an A-pillar pod full of Bully Dog gauges. The pod includes Bully Dog boost and exhaust temperature gauges as well as a trans temperature, and they provide Hanson with all the info that he needs on long rides.
Hanson gives kudos to those who helped with this project and says that the truck was originally designed by Joe Dutro. Gear Vendors played a major role in getting the

drive just so, as did Doetsch Tech, and honorable mention goes to Eliminator Motorsports, which helped round up many of the add-ons and some of the work. Hanson is busy on his next projects and has collaborated on several builds, including a rare 6×6 troop mover for Arnold Schwarzenegger. So if you see Hanson and his wife, Kim, on the road somewhere, ask him what he is working on next in his arsenal of outstanding vehicles. DB