INSTALLING A GEAR SPLITTER FOR PERFORMANCE AND EFFICIENCY

nybody who’s ever towed a heavy trailer up a long incline has probably experienced the following scenario: You settle into the sweet spot of the tach, chugging along at a comfortable cruising speed. Then, a slow-moving semi or RV pulls out in front of you, forcing you to lift off the throttle. Now that you’ve lost you momentum, you’ll likely face a couple of choices, neither of which is pleasant.

To get back up to speed, you might try running a heavy throttle and high

rpm, resulting in poor fuel efficiency. Or if you ease of the throttle and drop the revs, that may raise the exhaust gas temperature (EGT) too high, which can cause premature engine wear.

Solving this problem boils down to a simple issue of gear ratios. Whether you’re running a manual or an automatic, the spacing between those factory ratios is often too large of a gap when you’re towing a big load. The ratio you really need may fall somewhere in between them.

That is where Gear Vendors’

Under/Overdrive come in handy. Also called a gear splitter, the name comes from its ability to provide an increased number of underdrive gear rations (those that lower the overall gear ratios) and overdrive gear ratios (those that make the ratios higher). Putting it more simply, this particular unit adds five more gear selections to a Dodge Ram’s six-speed tranny, allowing you to divvy up the power-band more precisely.

The Gear Vendors Under/Overdrive are used in a number of applications, 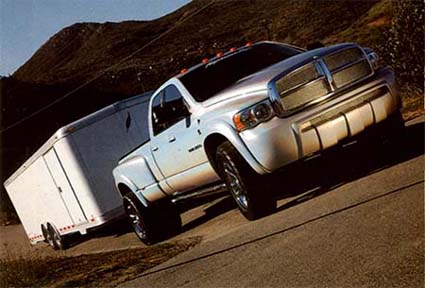 1. Since the Gear Vendors unit connects directly wit the driveline, the two-piece driveshaft needed to be removed. It will be replaced later with a shorter, single-piece shaft. The rear driveshaft came out first.

2. Next, the front driveshaft was removed.

3. The center support housing for the driveshaft had to be unbolted as well.

4. The stock transfer case before we removed the tailshaft housing.

5. The tailshaft housing was then unbolted.

6. We made sure to clean off the old gasket material thoroughly.

7. The Gear Vendors tailshaft housing (left); on the right is the adaptor for the gear splitter.

not merely diesel trucks. They are found on certain types of passenger cars, hot rods, delivery trucks, RVs, and even high-performance cars such as the Callaway Corvette. The unit has been in numerous record-setting competition vehicles as well, from land speed to drag racers. So the technology is a proven and reliable approach to improving performance.

The unit consists basically of a self-contained auxiliary transmission with planetary gear like those found in modern automatic transmissions. It fits in line between the transmission and the driveline. Since the unit has a pressurized lubrication system driven by an internal pump, it doesn’t share any of the fluids of the vehicle’s OE components.

Upon activating the unit with a rocker switch on the dashboard, a solenoid closes a valve, changing a path of oil to hydraulically hold a clutch pack that drives the planetary gears. These gears reduce the drive ration 22 percent (0.78:1), so you have intermediate ratios to maintain engine rpm at the optimum level. Splitting between the factory gear selections (hence the term “gear splitter”) gives you better hill-climbing performance, among other benefits. Other pluses include lower transmission temperatures, improved fuel economy, and reduced noise in the cabin.

Installation of gear splitter at Gear Vendors typically takes about a half-day or so. We first removed the transmission extension housing and bolt on the Gear Vendors replacement housing, which has an eight-hole pattern to receive the overdrive. Then we tightened the eight nuts and took the driveshaft with the new, included yoke to the local driveshaft shop to be shortened, per the instructions. With that done, we connected the electronics, filled the overdrive with the recommended lube, and were ready to

9. We carefully installed the new housing. Careful alignment of all the parts is critical. Some shimming of the coupler between the transfer case shaft and the Gear Vendors could have been necessary.

Even more impressive is the Cummins HPCR engine pumping out 370 horses and a prodigious 750 lb-ft of torque. As big as those numbers are, Gear Vendors has handled much larger levels of power without a hiccup.

As shown in the accompanying photos the install is a straightforward, bolt-on deal. The Gear Vendors unit is 14 inches long, requiring the two-piece driveshaft to be replaced with a single, shorter one. For this application, the tailshaft on the transfer case was removed and replaced with the Gear Vendors adaptor. One of the most important aspects we had to keep in mind was the precise alignment of the driveline angles. This was critical to ensure vibration-free operation.

As mentioned above, the electronic control box is installed inside the cab, under the dash. For a manual transmission, the switch for activating the unit mounts on the gearshift lever. For automatics, a foot-operated switch is used on the left side of the driver’s foot well (like the old headlight dimmer switch).

The electronic module control the splitter so that it engages at the proper speed and turns off automatically (at about 20 mph), in case you forget. The module also locks and unlocks the factory torque converter in an automatic, and also locks out the overdrive when in four-wheel drive. Overall, the gear splitter integrates seamlessly with the factory driveline and is easy to operate when it comes time to make your move around that semi. DP

10. This was how the housing and the adaptor bolted into the factory transfer case. 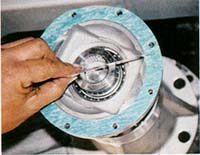 11. Next, a paper gasket was fitted on the adaptor. 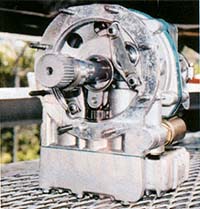 12. The Gear Vendors Under/Overdrive is fairly compact, and will fit underneath just about any truck.

13. The unit looks bolting it to the adaptor. A new, shorter driveshaft needed to be custom fitted.

14. The electronic control module fit under the dash, and the actuator switch was installed on the shift lever.

15. This portion of the Gear Vendors electronics was placed underneath the pedals in the foot well.

16. A speed sensor is part of the system, so that it engages at the proper speed (about 47 mph), and turns off automatically (about 20 mph).

17. The master switch for electronic module was placed in the dash. 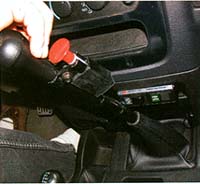 20. T20. With the master control module turned on, we hit the red actuator button on the gearshift lever. 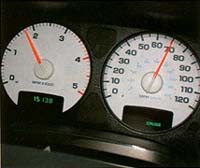 21. Once the gear splitter is engaged, the tach drops to 1,700 rpm, but we’re still running at 70 mph. That’s a difference of 500 rpm, a 22 percent reduction in the drive ration. Obviously you’d have the gear splitter engaged before climbing a hill, so you can select the right gear for the optimum throttle setting.