< The only thing wrong with Blowfish is the misspelled class designation of the wing (it should actually read F/BFCC for F/Blown Fuel Competition Coupe). Other than that, this is one amazing car.

It’s called Blowfish and it is the second Rad Rides car on this year’s Top 10 list. That one shop could build two Top 10 cars is quite remarkable, but when you consider that those two cars could not be further apart in concept and that the builder is not known for specializing in either genre, you get a whole new appreciation for the Rad Rides crew and specially their leader, Troy Trepanier. Troy has long been known for building high-end street machines and Dare to Be Different kinds of cars, and a street rod has slipped out of Rad Rides’ door every now and then, but nothing even remotely approaching the level of a Ridler Award winner. That changed this year. Likewise, nobody has asked Troy to build a legit race car from scratch, but when frequent

customer George Poteet wanted to run 300 mph on the Salt, he called on Troy and his boys.

The result was a combination of many different styles of car building that all work seamlessly together. The body style and evil 1,200hp, turbocharged four-cylinder engine made it a Dare to Be Different car; the attention to detail was as good or better than nearly anything you’ll find at an indoor car show; the level of fabrication rivals a modern Formula 1 car; and, oh yeah, it ran 255.412 mph at Bonneville on a partial pass, setting the record in F/Flown Fuel Competition Coupe in 2006. All that adds up to the most incredible hot rod of the year.

< Spend some time soaking this up. 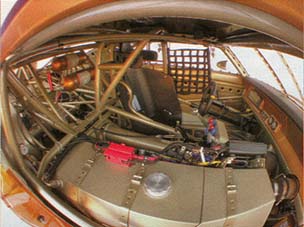 < At this year’s Boneville Speed Week, George Poteet blew the 175ci Chrysler four-cylinder into a million pieces, so the team missed the 300-mph goal. Rumor has it that a serious V-8 is going in the car for 2008. HRM