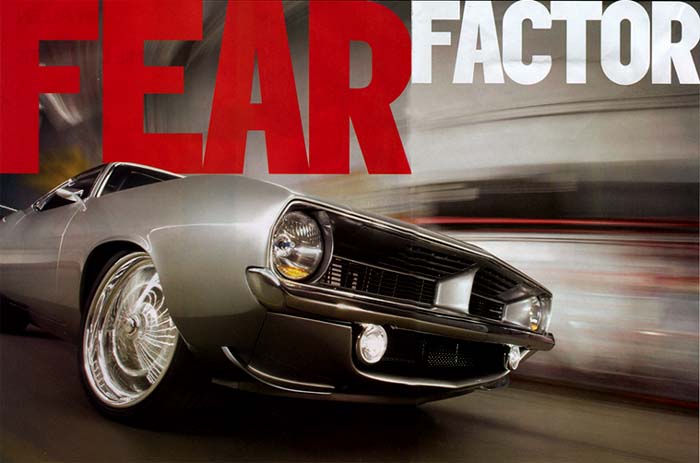 > The Sick Fish leaps like a shark with plenty of illumination from Xenon HID
headlight and a pair of foglights off a Harley-Davidson motorcycle.

As the shenanigans of each episode of Fear Factor draw to a close, host Joe Rogan enlightens viewers by announcing to the winner, “evidently fear was not a factor for you.” That line has been repeated

enough over the past five seasons to become a catch phrase of sorts that reflects the show’s success. In the cutthroat world of reality TV, that’s an awfully long time to survive, and it has no doubt imparted its host with some monetary flexibility with which to buy steel-crafted toys of hedonism.
Most Hollywood celebs opt for blinged-out Hummer H2s, Bentleys, traditional wanker exotics, and (gag!) trendy gas-electric hybrids, but Rogan did the right thing and had Rad Rides by Troy build him a ’70 Barracuda. The car means more to him than the average ego-carriage, as it pays tribute to a clunker Mopar his mom gave him before he made it big. In a

way, it symbolizes how far he’s come since the days of touring the country as a fledgling stand-up comic.
No doubt, the car had to be truly unique to capture the sentimentality it represented. Few builders are as well known as Troy Trepanier. Being the darling of the automotive press and a fixture on the hit TV series Rides has a way of doing that, and his list of celebrity clients grows by the day. We already broke the news that Troy’s working on a drop-top ’69 Lincoln Continental to sweeten that World Series trip for Boston Red Sox slugger Manny Ramirez. In addition to the inherent stress of delivering a hallowed E-boy that justifies the

> It took extensive work to accomplish, but the ‘Cuda
sits a mere 4 inches off the ground. The custom
rear valance houses twin exhaust outlets.

six-figures-and-then-some price tag, the crew had to work within a tight six-month timeframe to coincide with its scheduled debut on Bud Brutsman’s Rides show on TLC. That was the bad part. The good part was a relatively big budget to exercise creativity, with the only criterion being “make it cool.” Ah, the beauty of a double-edged sword.
A big part of making that deadline was starting up with a car in relatively good shape. Again, it was a rather laissez-faire process for Joe. He told Rad Rides what he wanted, and they went out and bought a car to start with for $13,000-one that was mostly rust-free and straight, save for a pair of dinged-up quarters. In trademark Trepanier fashion, the host of subtle visual cues aren’t recognizable at first glance, but their individual elements become more prominent upon closer study and more innovative when considering the craftsmanship they required. It ultimately hits you as a brilliant artistic statement. The most obvious change is the AAR ‘Cuda hood, not often seen in shiny paint,

and the cotton-gauze air cleaner peeking out from its flared scoop. Further enhancing the hungry-look theme is a custom front lower valance that integrates a scoop of its own surrounded by more AAR-like winglets on both sides. Widened and mounted flush, the front bumper is from a (forgive him) ’69 Camaro.
Moving rearward, hints of change are far less apparent and the overall look is more subdued. To hide the ugly stock stamped subframe, Rad Rides lowered the rocker panels accordingly, creating an illusion of the car squatting lower than it really is. Out back, a custom roll pan blends into the quarter-panels as if crafted from a single piece of steel. The rear bumper and taillights get the flush-mount treatment as well, and a custom rear spoiler complements the newly chiseled lines. Blemishes like the door handles, side-marker lights, and emblems have been shaved for a flawless complexion. We hear that a subtle paint scheme was planned until Rogan saw the bare-metal work-in

progress on our Oct. ’04 cover and liked it in plain silver. Besides, judging by looking at all three of this month’s feature cars, silver is the new red.
From the outside, the implication of Sick Fish is clearly one of modern sophistication. Dig beneath the skin, however, and an animal emerges that satiates our visceral desire to accelerate like a rocket sled. Nestled into an engine bay that’s blacked-out, Chevy style, is a fuel-injected, 650hp, 528ci Mopar Performance crate Hemi, which happens to be the very same engine plucked from HOT ROD’s Troy-built Hemi Dakota truck before it went to the crusher. The Elephant mates to a Bowler-built 727 automatic tied to a Gear Vendors under/overdrive, providing six forward gears. Finishing off the driveline is a 3.54:1-geared Strange Engineering Mopar-style Dana 60 rearend swinging from a custom four-link suspension extensively modified to accommodate the pavement-hugging ride height. 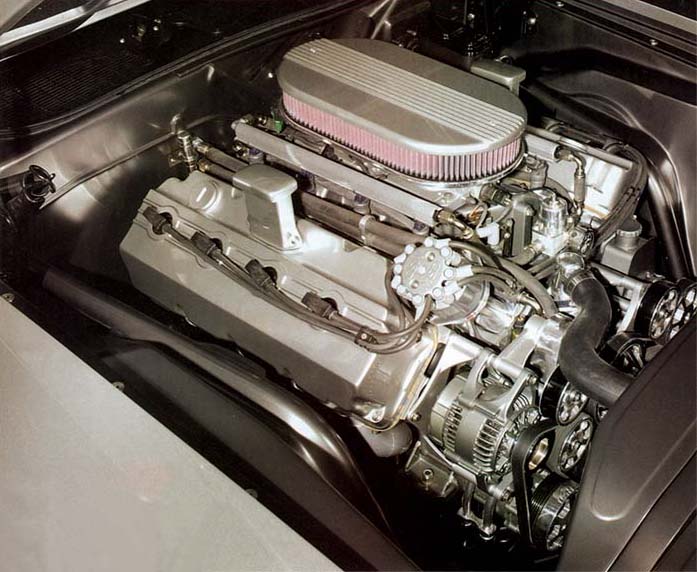 > In addition to the firewall, all external engine parts were smoothed
and painted. A Stock-type dual-quad intake manifold
was modified for the injectors and throttle-bodies. 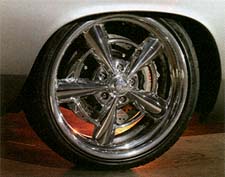 > LEFT: The huge custom wheels resemble Torq-Thrusts with an inner ring spanning across the spokes.

> RIGHT: The ‘cage facilitates easy access and the cam-lock simplifies getting strapped into the Recaros. 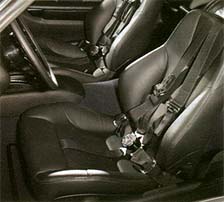 Rogan has no performance data on the car yet, but we think it would make for a good episode of Fear Factor and serve as retribution for all the times Joe has antagonized his contestants as they contemplate eating live Madagascar roaches, or as they

tremble before walking on a 3-inch-wide beam suspended hundreds of feet in the air. Imagine: Put Rogan in the right seat as Nextel Cup driver and SoCal resident Jimmie Johnson puts the ‘Cuda through its paces on the oval at California Speedway, just inches

away from the wall. If, after a dozen or so laps, Rogan can keep for soiling himself, we could shake his hand and say, “Evidently fear was not a factor for you.”
So Joe, Jimmy, and NBC what do you say? 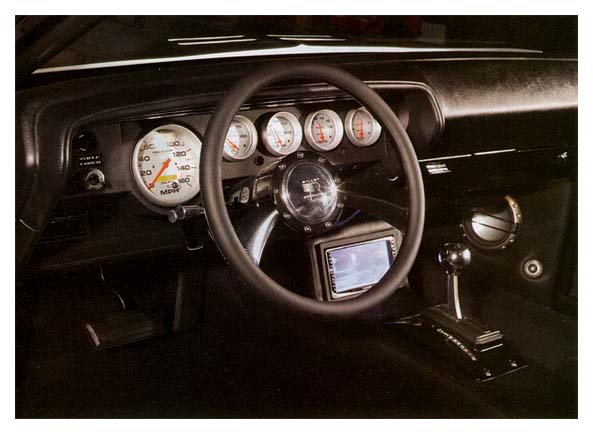 > > Gear selection is made with a B&M QuickSilver shifter.
A Kenwood head unit controls the mega-watt stereo.

> If ever unleashed onto a dragstrip, the 650hp Hemi
would have no problem launching the ‘Cuda’s 4,000 pounds.

POWERTRAIN
Engine: With a 4.500-inch bore and 4.150-inch stroke, the Mopar Performance crate Hemi measures a total of 528 ci with forged internals, 10:25:1 compression, and a 292-degree advertised-duration hydraulic cam. For clearance purposes, a remote-mount Milodon oil filter has been added. The intake is a Steve Magnante leftover from when HOT ROD owned the engine, and it’s topped by twin throttle-bodies for a Big Suff 3 EFI system. The injection is fed by a custom fuel cell, a Paxton pump, and Aeromotive regulator, and Bosch 45 lb/hr injectors.
Power: EFI guru John Meaney tweaked the 528 with his Big Stuff 3 standalone system to the tune of 650 hp.
Transmission: A bowler 727 automatic does the shifting to either go along with the drag touring vibe or make it easier to cruise Sunset Boulevard. A Gear Vendors overdrive effectively doubles the number of gears.
Rearend: The beefy Dana 60 rearend comes courtesy of Strange, fitted with 35-spline axles, 3.54:1 gears, and a limited-slip differential.

CHASSIS
Frame: To accommodate 22-inch wheels out back, the rear got a back-half job that required fabricating new tubs and modifying the floorpans. Custom chrome-moly subframe connectors stiffen the structure.
Suspension: The factory front torsion bars have been replaced with QA1 coilovers with 650 lb-in springs and Magnun Force fflcontrol arms. The subframe, also from Magnum Force, was raised for additional ride-height reduction. A flaming River power-steering rack eases slow-speed navigation. Out back is a custom four-link with QA! Coilovers and 400-lb-in springs.
Brakes: The binders are all Baer, with 13.75-inch rotors up front and 14.75-inchers in the back, squeezed by four-piston calipers. A Baer master cylinder and proportioning valve split the juice to each wheel.
Wheels: One-off two-piece Billet Specialties billet-aluminum wheels measure a 19×8 up front and 22×10 in the rear.
Tires: The skinny-sidewall BFGoodrich rubber is P235/35ZR19 in the front an dP285/35ZR22 in the back. 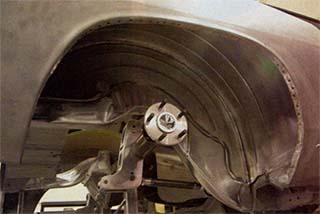 STYLE
Body: Rad Rides fabbed up new rear quarters and custom front and rear valances. The vibe is primarily road race with some drag race mixed in.
Paint: Spayed in-house at Rad Rides, the paint is an ’04 Nissan color called Sporty Silver that gets progressively darker toward the rocker panel, and a custom-mixed satin charcoal has been applied

to the taillight panel, grille, and hoodscoop.
Interior:The interior features an amalgam of hard-core race equipment and luxury. Occupants are held into the Recaro seats with a five-point harness that straps to a full rollcage. Auto Meter gauges adorn the instrument panel, and steering is accomplished with a Billet Specialties wheel.

>Top: To tuck the 22-inch wheels and lower ride height, the rear inner framerail had to be re-arched. The factory rails were cut and new rails were fabricated from a template. > Left: The trans tunnel was hacked and a new one built in it s place to raise the driveline up relative to the chassis and frame. > Bottom Left: Painstaking attention was given to maintain overall panel alignment and ensure that the rear roll pan fit flush. > Below: Too psyched to wait until the project was completed, the Rad Rides crew took Sick Fish on an early testdrive. 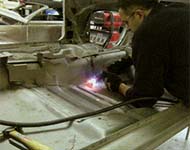 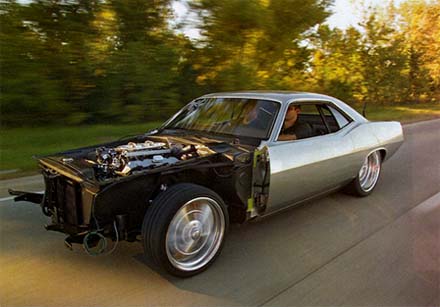