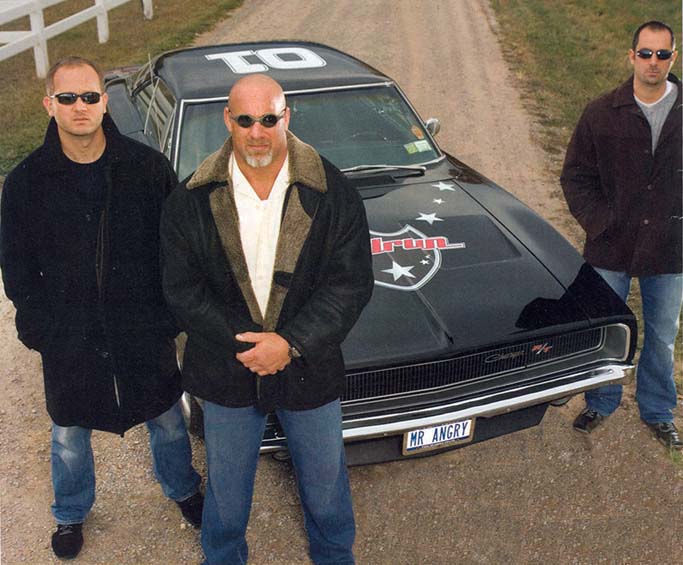 THREE GUYS AND A CAR YOU DON’T WANT TO MESS WITH.   LEFT TO RIGHT, CO-PILOT JOE ACIEMO, HOST BILL GOLDBERG, AND MR. ANGRY HIMSELF, MIKE MUSTO.   NOPE, THIS AIN’T THE DUKES OF HAZZARD AND THESE AIN’T “GOOD OLD BOYS.” 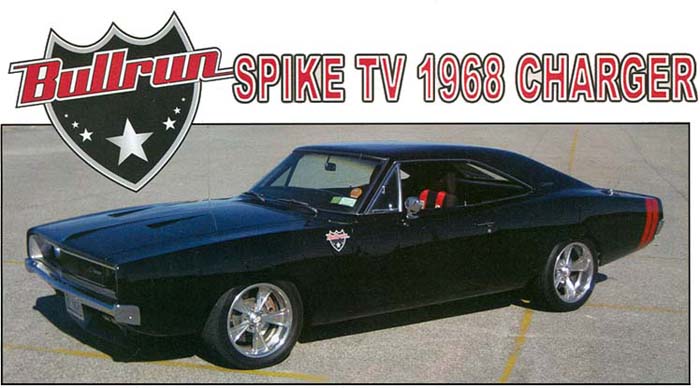 Mike Musto is a born and bred native of Queens, New York, and as such, fits most stereotypes of a 6’4″ guy from Queens you can concoct. Mike grew up watching car movies, and as an impressionable youth, one of the movies which caught his attention most was “Bullitt”, which still retains the unofficial accolade of having the best car chase ever filmed. Watching that black and red Charger flying all over San Francisco, and listening to its 440 scream, the boy was filled with unabashed automotive lust – he just had to have a car like that some day.
Time marched forward, Mike Musto grew up, got married to a lovely lady named Aisha, and his cravings for speed turned toward machines with two wheels. For years, Mike spent his weekends astride road race motorcycles, dragging one knee on unforgiving road courses all over the northeast at speeds over 160 mph. Yes, it takes a lot of nerve, skill, and a little bit of insanity to engage in that form of motorsports, and it also takes a good measure of luck. There were several hairy crashes where he went sliding across the asphalt with only padded leather between himself and the great beyond. Walking away from a couple of those crashes, Mike put his helmet away and decided it was time to find that black Charger he’d been wanting since he was a boy. Four years ago, the search began for a clean ’68 Charger to terrorize the New York and New Jersey toll pikes with.
Mike soon came to the realization that finding a ’68 charger might not be as easy as he first thought. For a car that had been so popular when new, they seemed to have all vanished. When he could find one, the owner either didn’t want to sell or wanted a bloody fortune in cash. All of which led Mike to locating a Charger practically right around the corner from him – actually it was in Woodville, Washington, a mere three thousand miles away. Through a twist of fate, Mike discovered Marty Sokulski in Washington. Marty’s a circle track stock car driver and builder who had recently tired of a 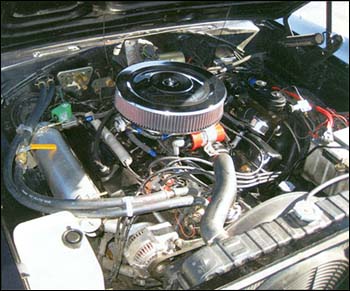 ’68 Charger project he’d been toiling over. True enough, the location was a bit daunting, but this package seemed to offer everything Mike had been looking for. The Charger had just been painted black with a red rump stripe (is that Bullitt enough for ya?), it had a fresh 440 in place, and overall, it just needed some finishing up. Once he’d seen a few photos and a few phone calls were exchanged, Mike was on a plane heading west to see the B-body for himself. Thankfully, the product was just as advertised; a ’68 Charger that was about 90% done, just needing a little TLC to finish things up. Marty had planned on making the Charger into an R/T clone driver/show car, but his racing activities left little time for the Dodge. Originally a dark green car with a green interior, green top, and a 383 two barrel, there certainly didn’t seem any harm in transforming this one into a killer R/T look-a-like. Mike left some money behind and the Charger was soon on its way across country. 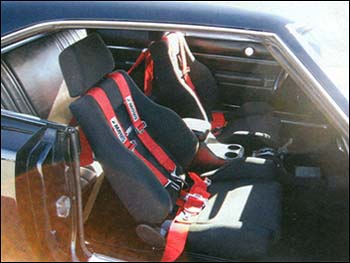 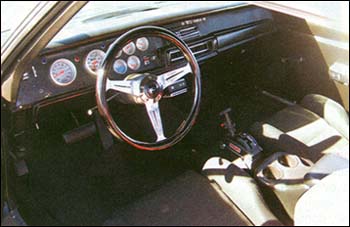 From the get-go, the plan was to build a retro Pro Touring Mopar, which was still something very new four year ago. Only a handful of old Mopar muscle cars had been turned into modern high speed cruisers at that time, and truth be known, some of the higher profile examples were hardly capable of being driven

dependably. Mike wanted to drive the tires off his new Charger, so right off the bat he started looking for ways to make the old Dodge as reliable as a new Lexus and as much fun to drive as the new Viper. While the Charger was indeed able to be driven, it wasn’t able to driven as much, or as efficiently, as Mike desired. At the end of the day, it was still a forty-year-old Dodge. The 440 overheated in New York traffic, the carb vapor locked during that first summer, and the black paint and cockpit looked great but made for a serious sweat box. After only a few weeks of motoring around, Mike yanked the Charger off the road for an extreme make over. The factory stamped steel and iron suspension components were state-of-the-art for 1968, but a lot’s changed since then, so this was the first area of the project that Mike attacked. The stock steering box was thrown out in favor of a Firm Feel Stage III unit, and a number of other Firm Feel components found their way up front, including the pitman arm, idler, greaseable lower arm shafts, and nylon lower arm bushings. Energy Suspension bushings were installed front to rear to hold everything in place. MagnumForce fully adjustable tubular upper A-arms replace the stock steel pieces, and Mopar Performance oversized .96 torsion bars keep the nose low, with the bars cranked down to be just above the bump stops. A Hotchkis 1-3/8″ sway bar is up front handling the heavy end, while a Addco 7/8″ bar resides near the 8-3/4″ rear to keep the Charger’s rump from moving around too much. The rear end itself rests on Mopar Performance 1″ pre-lowered Hemi leaf springs with 1″ lowering blocks to shove the whole rear 2″ higher into the body. Edelbrock Performer LAS shacks reside at all four corners, there’s an XV Motorsports chassis stiffening kit, subframe connectors, an engine brace, inner fender braces, and a braced radiator support. In short, this thing’s extremely tight. To make this black heavyweight halt instantly, Mike installed huge Baer 13″ disks up front and 11″ disks out back. To control monster brakes, there’s a Baer proportioning valve and a Hydroboost Hydraulic brake assist system. That pretty much takes car of the “touring” end of building a Pro Touring car, but another essential ingredient is a potent drive train.

The Charger’s 440 was a decent running engine despite its problems staying cool, but for an all-out banzai bruiser, more power was called for. The engine was yanked and punched .030 over, but for the sake of reliability, Mike opted to stick with a reasonable 10.5:1 compression ratio. The internals of the 440 are largely stock, with the addition of a .470 lift hydraulic cam for a bit more valve action. Hedman headers flow into a three-inch exhaust system with Flowmaster mufflers. There’s a Bosch GM-style alternator to keep voltage up for the electronic ignition and the Charger’s other electrical components. The thing which gets most people’s attention under the hood is that gigantic aluminum canister next to the engine on the passenger’s side. What we have here is a NASCAR-style Moroso three quart pre-oiler with an electric pump. Knowing he would be driving this one hard and wanting to eliminate any chances of oil starvation thanks to hard cornering, mike installed this three-quart reserve which circulates oil throughout the engine continuously and dumps oil on the top-end just prior to starting, so everything’s wet the second the plugs start firing! We’re surprised more guys aren’t using these quite honestly. All told, the big block pumps out a dyno’d 450 horses and 475 ft. lbs of torque.
Behind all that power is a reverse manual valve body TorqueFlite with a Cheetah SCS reverse pattern cable shifter. Attached to this, you’ll find a Gear Vendors overdrive unit, which gives mike a bit more room to play on the interstate. The 8-3/4″ rear holds 3.55 Sure Grip gears. But with the 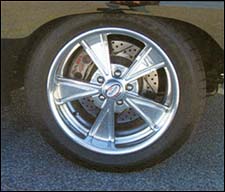 THESE NOSTALGIC BOYD CODDINGTON ROLLERS ARE 18X10S, SHOD WITH SUPER STICKLY NITTO 566 SERIES 245/46ZR/18 RADIALS.   WE’VE COME A LONG WAY FROM THE DAYS OF SLAPPING ON A SET OF PRO-TRAC N-50-16S AND PRAYING THOSE FAT TIRES WOULD GRIP!

overdrive unit, on highway blasts, that number can be translated down to 2.76. Yes, this sucker can fly on wide open road!
The interior of Mike’s modernized Charger features black leather Corbeau GTS II seats, a Grant billet and mahogany three-spoke steering wheel, a custom center console made by Classic Consoles, there are Crow Racing four point racing harnesses, and a custom Alpine stereo with iPod integration and a six-disc CD changer. Who says you can’t have the best of all worlds?
Subtle custom touches done to the exterior during the rebuild include shaved-off rain gutters, the side marker lights were smoothed out, and most all of the chrome and stainless trim was

taken away as well. Adding some personality to the whole package, you’ll find Boyd Coddington custom billet 18×10″ rims out back and 17x9s up front, all shod with Nitto 555 high speed radials.
Mike Musto never intended his Charger to be a Hollywood celebrity, but fate had other plans. When Bill Goldberg signed on to host the Bullrun cable television show for Spike TV, the call went out for cool cars to participate in the “Cannonball Run”-type highway race reality show. Mike threw his name in the hat, not thinking much of it at the time, but sure enough, the black Charger was picked to carry the Mopar banner in the series! So, in 2006, Mike Musto and his Charger became international celebrities on Spike TV, going toe-to-toe with exotic Lambos, Porsches, and all manner of fast machinery. How well did he do? Well, he’s going back to do it again this year, if that tells you anything! And we can also tell you this, there are some guys out there with six figure exotic cars that saw a lot of taillights from this old Dodge!
The celebrity factor hasn’t gone to Mike’s head though, we can assure you. Practically every weekend, you’ll find Mike out on the highway with the Charger. If he’s not out on the highway, he’s trying out some twisty back road through the country. Mike’s the kinda’ guy who’s not happy unless those pipes are screaming, and believe us, these pipes are definitely getting a workout!