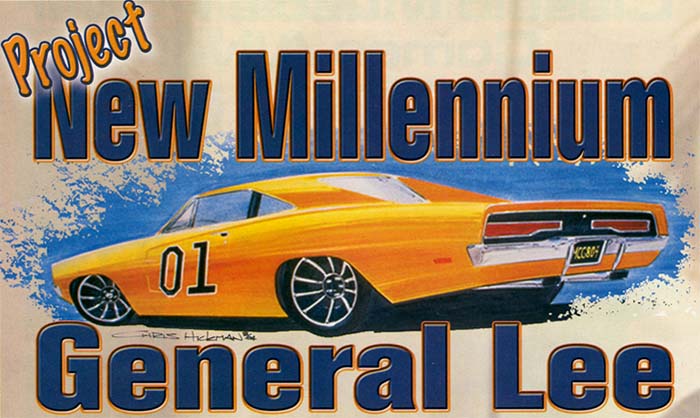 On the corner of Meridian and South sits the oldest bar in Indianapolis, Indiana. Said to once have been a brothel and the rear wall was used for John Dillinger’s target practice, to say the 1850 structure has character is an understatement. Today, the sign above the door reads “Slippery Noodle Inn” and on nay given night there’s not one, but two live blues bands rocking the rafters. The Noodle is without doubt one of the hottest blues clubs in the country. 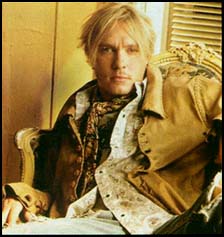 Being a huge fan of the blues, I make it a point to visit the Noodle every time I’m in Indy; last March was no exception. The talk in the bar that evening was of a young blues guitarist from my neck of the woods, Louisiana, who was coming to play the following week. Kenny Wayne Shepherd was his name and, despite the fact we both live in Louisiana, I’d never heard him play live. Since the guys expect a magazine every month, I had to miss his show at the Noodle because I had to get back to the office.
No sooner did I get back to work then I received a phone call from a friend regarding, of all people, Kenny Wayne Shepherd! Kenny was looking to buy a General Lee Charger and needed a little help finding a good one. After talking about what he was looking for, I knew what needed to be done – road trip! It was time to introduce Kenny to my friends at Redline Gauge works in California. I knew they would do the boy right and I also knew that Shannon’s (of Redline) father-in-law, Renaud

Veluzat, built the majority of the original General Lees for the television series. Early April I hooked a plane to Los Angeles (Kenny’s other hometown) where Kenny and I headed over to the Melody Ranch, the late Gene Autry’s film studio, 10 acres in the heart of Newhall, CA Shannon introduced Kenny to Renaud, who himself is quite an accomplished guitarist, and before long, a jam session ensued! There we were in an old western movie set saloon, listening to our own private “unplugged” jam session so to speak . . . I guess I can now say I’ve heard Kenny play live!
Needless to say, the introduction was a success. But, in usual Mopar Collector’s Guide fashion things quickly got completely out of control. Somehow, that simple plan to clone a General Lee evolved into creating one of the most radical General Lee Chargers ever. Initially, Kenny wanted nothing more than a daily driver look-a-like and wasn’t concerned if it had a 318 or a 440 in it – he just wanted a fun cruiser.

Shannon found a clean ’69 383 Charge in Idaho at a bargain price, which served as the basis for the operation. Then things got out of control rapidly! Instead of building just another General Lee, this might be what you would call a new millennium General Lee – the General Lee Version 2.0 perhaps?
What we’re dealing with here is an entirely updated General Lee with modern state-of-the-art technology mechanically, electronically, and cosmetically. As shown in the accompanying artwork, this will not exactly be the same car Bo and Luke were throwing around dirt roads! Kenny’s General will be much more at home hauling ass on the Pacific Coast Highway than churning gravel and sliding sideways between trees.
MCG will have a full feature on the completed car in an upcoming issue, but we just had to give you a heads-up on this way cool concept. This General Lee is packing a lot of “shock and awe.” Set to make its public debut at the 2004 SEMA show in Las Vegas, at the Gear Vendors booth alongside Troy Trapaniear’s tricked out Hemicuda for “Fear Factor” host Joe Rogan. We guarantee, you’re going to see a lot of this car in the months to come. In fact, the popular television show “Rides” is filming the car’s construction for an upcomingshow.
Kenny Wayne turned over the whole project to Shannon at Redline because Shannon has an intimate knowledge of the original cars and has been in the hobby long enough to know where to get the parts. Likewise, Shannon knows who can get the specialized jobs done. Once the concept for the car was laid out, a parade of businesses and specialists signed onto the project, eager to put in their two cents to make this one a standout. We’ll have full details on this in our feature, but here’s the short list of major contributors to the cause: Ted Moser’s handling the body work and paint, Steve Strope came through in the 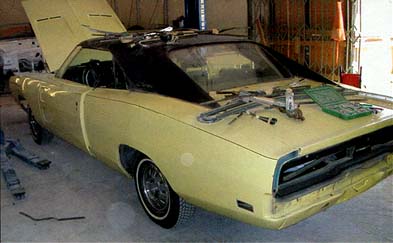 suspension department, Budnik’s custom made the huge 19″ and 18″ billet versions of General Lee wheels, DuPont supplied the paint, BFGoodrich supplied the huge tires, Jerry Noone is executing a killer leather interior, Mopar Engines West is building an awesome stroker big block that’s going to have more trick systems on it than an F-117! Eclipse Audio’s provided an unbelievable sound system, there’s going to be onboard computer navigation, a John Cope transmission, Fat Man front end parts, Edelbrock aluminum heads and other goodies, a TTI exhaust system, Electromotive ignition and fuel injection, and a boat load of resto parts from Year One. And of course, Redline Gauge Works is making all-custom instruments for the Charger. Again, that’s the short list

When just a plain black ’01” will not do, it’s time to call in the artistic talents of Pat Ceo at Hot Air Airbrushing in Santa Clarita. The number on the doors will have this severely cool tattered flag effect ghosted over the paint, creating a very three dimensional effect. This also makes the Charger look like it’s going about 110 mph while sitting still. What can we say, the guys aren’t overlooking anything on this one!

and we’re leaving a lot of details out, but hey, we’ve got to save something for our follow-up article. Trust us, it’ll be worth the wait!
As of this writing, Ted’s has the car completely stripped and it should be painted and well on its way to being

completed by the time you read this. Work is progressing very quickly as the November deadline for the car’s debut at SEMA is looming quite close.
When it’s all said and done, however, Kenny’s still a down-home car guy. Regardless of how high-tech this one will be, it’s still a car and Kenny’s still planning to drive it. This one will never be mistaken for any other General Lee out there, but then again, how many Mopar guys like to blend into the crowd? We’ve gotta think this one’s going to make Kidd Rock more than a little envious and might make him reevaluate his own General Lee replica. Congrats to Shannon for coming up with this remarkable concept, as well as a big time well-done to everyone who’s been involved in making the concept a reality. I can’t wait for a ride in this one! 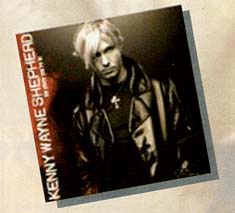 Here’s Kenny’s new CD “The Place You’re In”, which should be in stores by the time you read this. A bit of a departure from his rock/blues sound, what we’ve heard of this one so far is more progressive crossover modern rock with amazing guitar pyro action. It’s the first CD from what we understand, where Kenny’s handled the vocals himself. The boy’s got skills! This one will be big, guaranteed. There’s also a tour planned, so check out his website for more information, www.kwsband.com.