et’s face it, there ‘s something magical about the sound a Hemi makes as all eight barrels on a brace of AFBs begin moving air. The image that comes to mind is that crazy ’70 ‘Cuda advertisement showing the new Shaker in action; nothing is safe at full throttle. So, when Mike and Ray Staveski at Time Machines Auto Restoration in Hudson, Florida, gave us a chance to experience Hemi power through fuel injection, we jumped at the chance to go play for a morning. Of course, this was purely for objective scientific reasons, not because we just wanted to drive a ’70 Hemi Challenger convertible or anything like that; just science.
Several years ago, Mike and Ray built this E-Body drop-top as a show car, complete with a Chrysler V10 engine and AOD four-speed transmission. After all the accolades and awards, the Staveskis decided to remake the Challenger again, going back to an old-school powerplantâ€¦in a new way. The originally 318-motivated machine would get an infusion of elephant power, which would not be too difficult since the V10 necessitated a Hemi K-frame anyhow.
The Hemi that ended up between the fenders is a stock ’70 version with the exception of a Lunati custom-ground camshaft and twin Holley throttle bodies. We covered the basic injection outfit that Time Machines developed in conjunction with Holley in the March issue (“Computer Controlled Hemi,” p.60). The rest of the drive line consists of a TCI-converter-equipped 727 Torqueflite coupled to a Gear Vendors overdrive unit, which in turn is backed up by a Dana 60 with 4.10 gearing. The car rolls on Billet Specialties Vintec wheels measuring 17×8 up front and 17×9 Â½ in the rear and wrapped in big BFG meats.

The interior was also restored by Time Machines with parts from Year One and Auto Custom Carpets. Like the horn button? That little touch is the hubcap center from a K-car (at least somebody found a use for it). All told, Mike and the crew created a reliable Hemi driver that can handle anything. We shot some photos, then Mike handed me the keys. I love it when a plan comes togetherâ€¦.
The Hemi uses a late-model starter, and a twist of the key hand the engine up and rumbling with a mere three revolutions of the crank. Any Hemi, by its very nature, is known for its throaty horsepower idle, but that custom Lunati Cam gave it an even more radical sound. The converter is somewhat loose; putting the car into gear, it’s easy to feel the rpm level climbing before the car begins to really transfer torque and start moving. Soon, we were out cruising the back roads of Florida’s Gulf Coast. This included moving a large turtle out of the road early in the journey (just so people know we aren’t heartless media goons).
The engine tones were muffled by the pair of Flowmaster mufflers and, with the help of the rebuilt suspension, the road felt smooth as silk. Of course, nobody owns or builds a Hemi car just for comfort; we were aching to find out how the EFI unit compares to the standard carbs. From a dead stop or low rpm range, the AFB-equipped originals tend to get a little flat while the fuel starts moving through the engine (unless you’re pretending to e Ronie Sox and sidestepping the clutch at 4,000-plus). The benefits of fuel injection over a standard layout are smooth transitions from idle to full horsepower, and adjustability for different driving styles by using the computer. That said, and the car set for drivers like us, we put it to the big-

toe test. Off the line, application of the big toe to the accelerator pedal broke the tires loose without effort, and the engine (being a Hemi and all that) hardly sounded like it was laboring.
The slow steady application of the pedal quickly and easily sent the car toward triple digits. This level of speed was quickly multiplied by the Gear Vendors unit, which essentially turns the three-speed ‘Flite into a six-speed, if needed. Even with the 4.10 gears, the car was reasonably tame. Trust me, with enough open highway, I would hate to guess the top speed in this thing. Let’s just say we ran out of road before we ran out of car.
Off the highway and back in traffic didn’t present any problems. The updated cooling system in the convertible kept temperatures comfortable. The Challenger is ahead-turner, no doubt about it, but the engine was quietly loping away under the bonnet at 800 rpm, and there was no hint of a rich condition. Driving back to the shop, I had to give this one a thumbs-up.
The truth is most of us, myself included, are “old school” guys. The fuel injection technology can be a little overwhelming, and it does require a willingness to think outside of the jetting box. However, this morning I became a believer in its benefits. Smooth idle, an excellent acceleration curve, and good mileage based on the Gear Vendors box and responsible driving habits make this a “have your cake and eat it, too” situation. Besides, I’ve spent enough time dealing in carburetors over the years to know that once the word gets out on how well this hardware works, we’re all going to be tuning with laptops. Too bad this stuff isn’t legal on Pro Stock engines. 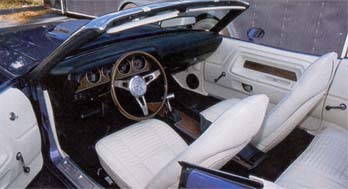 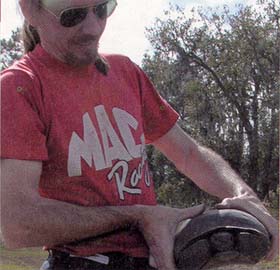 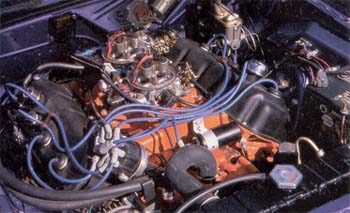 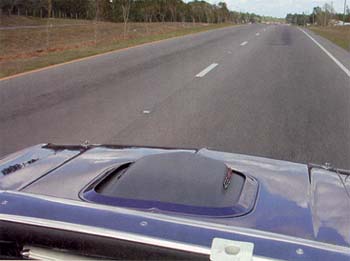