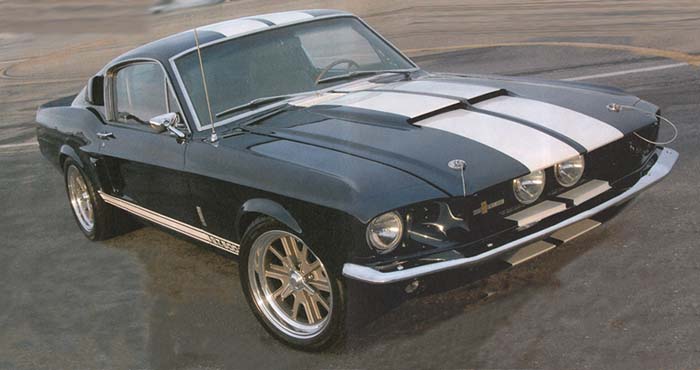 iven Carroll Shelby’s intense focus on winning road races back in the mid ’60s, it’s no surprise that the Mustangs he modified for competition were barely suitable for daily driving. By 1967, though, his growing group of performance fans wanted more than just the raw-boned race car that was the first G.T. 350.
Not only that, but the small-block ponycar was getting bulked up enough to make room for a big-block-the 428 Police Interceptor, enough firepower to outgun all its predecessors. It could point and shoot just fine, but with all that weight over the car’s front end, even the G.T. 500’s suspension upgrades weren’t enough to compensate. And the traditional front disc/rear drum braking system could hardly haul down all that extra heft without fading at some point.
That’s all history now, but what if we could revisit that era armed with modern technology to enhance a pinnacle of muscle car performance? We don’t mean go the restomod route, but rater, use speed equipment to make changes that are nearly imperceptible to all but the most astute observer, to maintain the car’s classic lines.
Which brings us to the ’67 Shelby G.T. 500 shown here. The owner prefers to remain in the back-ground, but he sought a couple of key players in the muscle car arena, Newport Customs and Rick Johnson of Gear Vendors, to assist him in making some improvements to the Shelby’s chassis and drivetrain.
“Our objective was to maintain originality since it is a true Shelby,” he notes. “But we chose to tastefully upgrade certain things that really make the driving experience exhilarating, just the way you would want your big-block ’67 G.T. 500 to accelerate, brake, and corner. Yet we didn’t want to sacrifice ride quality or compartment comfort, nor did we want it excessively loud.”
All reasonable goals, yet considering that his daily driver is a ZR1 Corvette, this owner’s expectations might be higher than most. Knowing his frame of reference, Newport Customs and Gear Vendors applied their skills to give this Shelby cornering and stopping capabilities that are close to that of a ’10 muscle car. As already noted, the ’67 G.T. 500 was blessed with a behemoth big-block. Although 355 hp might sound tepid by 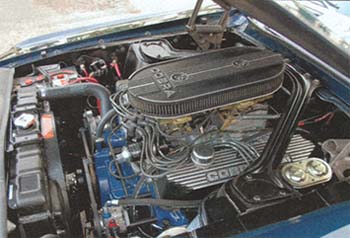 today’s standards, recall that the torque was 410 lb-ft at 3,200 rpm, enough stump-pulling power to get it out of the hole in a big hurry.
Aiding the launch was the same cam used later in the ’68 428 Cobra Jet. This bumpstick actuated hydraulic lifters, and topping the medium-riser aluminum intake manifold were two Holley 650-cfm carbs, fitted with a progressive linage vacuum secondaries. That’s all fine and good, but unlike the nimble G.T. 350, with a front/rear weight distribution of 53/47 percent, the G.T. 500 was nose-heavy, scaled at 56.4/43.6.
That didn’t really matter on a dragstrip, but just try herding that rig around a tight turn. The rear would become disturbingly light when you applied power through the apex. Fun if you like to drift, yet a greased brick if you weren’t careful.
Now consider that the engine in this Shelby was modified in some significant yet barely discernible ways (at least to the casual onlooker). The block was opened up by Bob McKray Performance with a larger bore and Scat stroker crank to a total of 470 cubes. Add to that the Edelbrock Performer aluminum 6006 head (painted to match the block color), a Comp Cams custom bumpstick, and Spa headers dumping into Dyno-max mufflers, and you/ve got a whopping 500 hp and 580 lb-ft of torque on tap.
A Pertronix electronic ignition, neatly concealed under the traditional distributor cap, fires the plugs. To keep the hotter mill in check, Redline Cooling supplied an aluminum radiator (painted black to look original), and a pair of Spal fans pushes air through the original fan mounted on the inner face.

This is how the G.T. 500 looked prior to its upgrades. If you compare this to the shot on the story’s opening spread,you’ll see that the modifications—other than the 17-inch wheels and tires—were truly invisible. 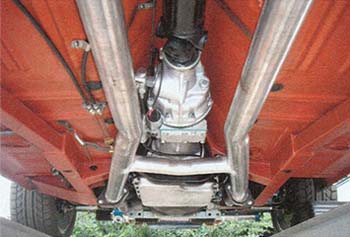 The meat of the Gear Vendors upgrade is under the car, tucked between the H-pipes, where no one is the wiser unless the car’s on a hoist. The overdrive unit gives this Shelby long legs, bringing down its revs at cruising speed to improve the motor’s longevity. 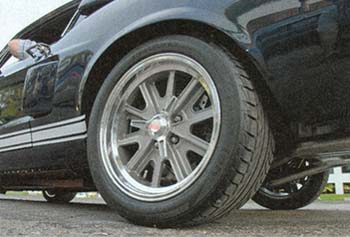 The 17-inch wheels and BFG g-Force rubber break our usual “no wheels over 15 inches in diameter” rule. But this car illustrates the kinds of mods you can make to improve day-to-day drivability without compromising its vintage looks (too much).

Even though acceleration cover a multitude of sins on a muscle car, the owner of this G.T. 500 realized the importance of a well-sorted-out street machine, one that he could tour on long drives. To that end, he really did his homework, starting with Total Control’s coilovers and control arms, which not only replace the leaf springs and tube shocks but also lower the ride height a full 2 inches. He also specified Energy Suspension polyurethane bushings, which not only are resilient but don’t twist, and they last much longer than the traditional rubber donuts.
Larger Wilwod disc brakes are at all four corners, with six-piston calipers up front, which not only provide more clamping force but also reduce unsprung weight and have a much

onger life. But those pieces require extra clearance, so the wheel diameter went from 15 to 17 inches. Lastly, they were wrapped with BFG’s g-Force rubber to ensure a bigger contact patch.
“It’s all about safe,” the owner explains. “I wanted to create a balanced car that eliminates the weakest link.” He has already pushed the speed past triple digits, and he notes that it’s very stable and doesn’t ride rough. It doesn’t lean or drift in the twisties either. But there was more to come in the area of drivability.
G.T. 500s came with either a four-speed Top Loader or C6 automatic. While both are still considered among the best transmission with regard to durability and performance, they lack an overdrive gear that would be nice to 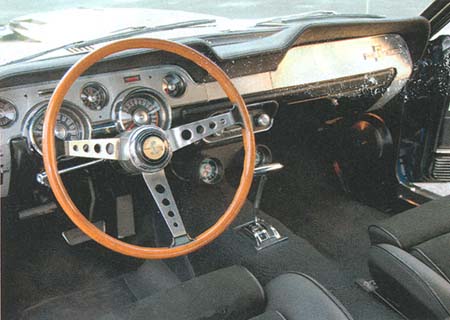 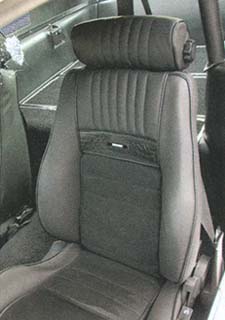 The G.T. 500’s interior is a mix of old and new. The owner chose to upgrade the seats with contemporary Flowfits and leather upholstery, but the instrument panel and controls are all vintage. The Gear Vendors overdrive is activated with the floor dimmer switch. 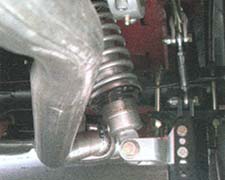 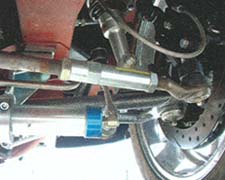 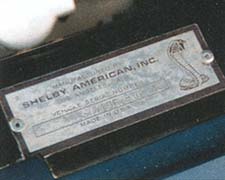 Under the car are more invisible upgrades—adjustable coilovers, poly bushing, and more—to improve the nose-heavy car’s handling. The changes also lower the car about 2 inches

This Shelby is no clone, which is why the owner went to such great lengths to retain its heritage.

have for drivability. Overdrive slows down the motor for better fuel mileage, and reducing the engine revs hour after hour really does help with drivetrain durability as well.
In either case (automatic or manual), you wouldn’t dream of replacing the transmission with something inherently weaker. A viable alternative is to add a gear to this Shelby’s original C6 withMuscle Car Review Magazine, October 2010 the Gear Vendors overdrive system. Since it bolts onto the rear of the transmission, it’s not readily visible and leaves the factory tranny intact and period correct.
To give the car more get-up-and-go, Gear Vendors nets a 28.6 percent faster gear, so that a 4.10 rearend would have the highway manners of a 3.20. This particular owner wanted very low rpm at cruising speeds, and since the car has a tire-roasting big-block, he decided on a

3.25 rear gear. That nets him a final-drive ration of 2.53 when he’s in Third gear with the overdrive engaged.
A loping engine at highway speeds isn’t the only benefit of the Gear Vendors unit. It also turns this C6 into a close-ratio gearbox. With the 3.25 rear gear and without the Gear Vendors unit, shifting from First (2.46 ratio) to Second (1.46) net a drop in final-drive ratio from 8.00 to 4.74—a sharp dip that makes it tough to keep the engine in its optimal torque range. With the Gear Vendors unit, the 1-2 shift at launch entails moving from the standard First gear (2.46) to First overdrive (1.92), which nets a small drop in final drive ratio, from 8.00 to 6.24. This lets the engine stay in its power band, which translates to acceleration that the owner favorably compares to his daily-driven ZR1—quite a statement for a car

that’s more than four decades its senior.
Just as Shelby added a bit of civility to this primeval Mustangs, so this owner went a bit more uptown in the cockpit. He installed Flowfit bolstered seat up-holstered in leather and embossed with the ponycar logo. While we would never take anyone to task for making life more comfortable, especially for some high-speed grand touring, we are already expecting some objections from the hardcore muscle-car contingent. Just don’t try to take on this Shelby G.T. 500 on the track, where it really matters. MCR