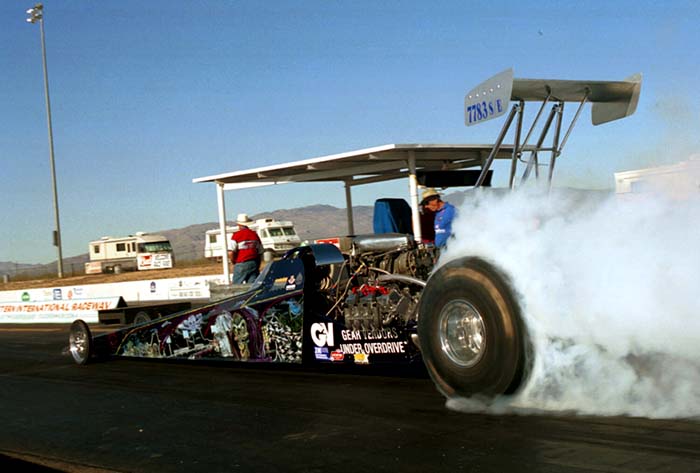 Jim Luttrell drove his Hemi-powered dragster to the first 200-mph speed, 204.80,in Korbel Super Eliminator history. He made two other 200-mph passes in qualifying before bowing out in round two.

SACRAMENTO RACEWAY PARK, Sacramento, Calif. (Aug. 15-17) Tom Hall won his first Korbel Super Eliminator Series event of the season when he drove Gary Heck’s Korbel Champagne-sponsored ’62 Chevy Impala to a final-round win over his nephew, Dean Hall. It was the first time in series history that the Korbel-sponsored cars had met in a title round.
Jim Luttrell’s record-setting 204.80-mph blast took some of the shine off the all-Korbel final. The awesome performance will go in the books as the first Super Eliminator run to eclipse the 200-mph mark. Luttrell made three qualifying passes with his 470-cid Hemi-powered Yancer dragster that
surpassed 200 mph, then lost in the second round to Del Cox Jr. Luttrell credits his recent performance to J.W. Performance, Gear Vendors, Yancer

Race Cars, crewmember Alex Selak, and wife Lisa.
Tom Hall used .009 reaction times in the first two rounds to defeat Jimmy Johnson and John Richardson, respectively, then recorded a .026 light to beat points contender George Prather. He had a bye in the semifinals.
Dean Hall drove the Korbel Brandy-sponsored dragster to the final by stopping Geneva Nash, Robert Dietz, Mike MacBrair, and Alex Selak.
In the final, Tom Hall had the better reaction, 0.39 to .088, and won with a 7.91, 167.70 against the 7.90 index. The younger Hall recorded a breakout 7.88 at 172.72 mph.
Entering the final event of the season in Las Vegas Oct. 30-Nov. 2, Carolyn Hills holds a 10-point lead over Cox, 269 to 259, followed by Prather (258), Hans Scheibe (214), and Dean Hall (210).