2003 Ford F-150 Prerunner – Under The Knife
A Supercrew Sliced, Diced, And Twice As Nice

By: Kevin Blumer
Photography by: Kevin Blumer, Lisa Cassel
Reprint from www.off-roadweb.com – From the July, 2009 issue of Off-Road

When is it the right time to cut up a perfectly functional truck in the name of off-road performance? Some wait until the warranty period is passed. Some hold off until they’ve collected a pile of upgrade parts. Others dive in headfirst as soon as they realize they want something smoother, stronger, and faster.

Shawn Cassel, of Folsom, California, falls into that last group. “I went to Glamis a few years ago with my truck, and I thought I’d do pretty well,” he recalled. “At the time, it had a bolt-on lift kit, long-travel leaf springs, and a bed cage for the rear shocks. Instead of dominating, I got chewed up and spit out.” Shawn decided it was time for a major change. “I bought my ’03 F-150 Supercrew new, and I cut it up with only 9,000 miles on it.”

Fortunately for Shawn, the F-150 platform is supremely popular and well-supported by the aftermarket. The front lift kit came off and was replaced with a long-travel H&M Motorsports suspension system. The Supercrew’s hindquarters received similar treatment: the leaf springs were set aside in favor of H&M’s 4-link suspension.

Purchasing and installing the H&M components was the easy part. Connecting the dots front-to-rear with a full roll cage was tougher. Instead of taking his truck to a SoCal shop and handing it off, Shawn plunged in and built the `cage in his garage, supported by the helping hands of his wife, Lisa. The two cut, bent,notched, and welded a triangulated maze of 1.75-inch .120-wall tubing that surrounds all four seats and reinforces the entire chassis.

There’s a similar story under the hood. The 5.4 Triton is a good engine and the E4OD is a good tranny, but this combo isn’t as tough or as off-road proven as a 351 Windsor and a C-6. The ’03 drivetrain was set

aside and was replaced by a 351 bored and stroked to 422 cubic inches. The stroked 351 is backed by a C-6 three speed with a manual valve body. Aft of the C-6 you’ll find a Gear Vendors overdrive unit. “That’s actually my favorite part of the truck,” Shawn told us. “The Gear Vendors lets me go all the way to 110 mph even with the three-speed tranny and the low gears in the axle.”

After first talking to Shawn in late ’05, we were finally able to catch up with him during a Glamis trip in late ’08. There’s plenty to gawk at (and photograph) on this truck, but a bit of seat time was mandatory for a proper evaluation. With Shawn at the controls and all four five-point harnesses cinched into place, we motored through the dunes at warp speed. How does it ride? It’s buttery smooth. It flattens the bumps and soaks up the landings. The 1.75-inch ‘cage tubing ensures safety and inspires confidence. We’re glad Shawn didn’t wait to put his Supercrew under the knife. 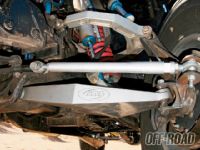 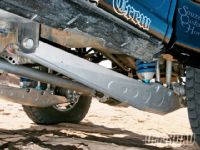 ……The rear four-link bolts to custom-mounted pivot points, and cycles beneath a back-halved frame that allows
more bump travel than the factory frame rails would. The front suspension cycles 17 inches of wheel travel, and
the rear provides 28. 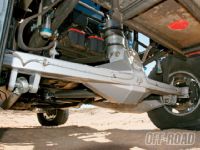 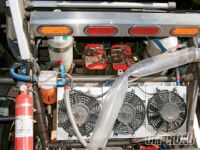 How’s this for well-built and well-prepared? A trio of PWR coolers keeps tranny and engine oil temperatures in check, while a pair of fire extinguishers is ready to keep unexpected flames in check. Dual red-top Optima batteries give the truck reliable electricity, and a CO2 tank is ready to inflate the tires or run air tools as needed. 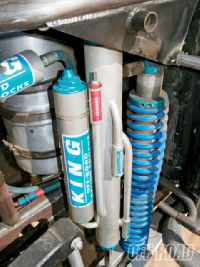 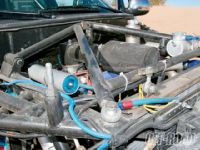 This is the first time we’ve seen rod ends (a.k.a. Heim joints) used to secure an engine cage, but we think it’s a great idea. Rod ends can be adjusted so they will still install easily after the heat of welding pulls the `cage tubing away from its original position. Since rod ends are strong and rigid, structural integrity is retained. This engine cage unbolt for easy engine access. 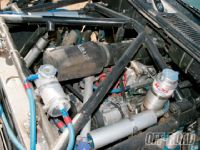 The stock 5.4 Triton was shelved for this 422 small block Ford, which was built by Don Zemina of Motor Machine and tuned by Bob Crespo at S.V.S. R&D. 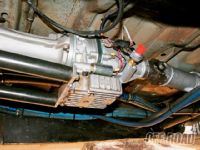 This Gear Vendors overdrive lets the C-6 pull the `Crew all the way from zero to 110mph. It’s Shawn’s favorite part of the truck. 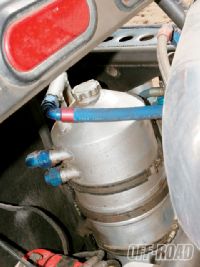 A dry sump tank isn’t something you usually see on a prerunner, but a dry sump oiling system offers the same benefit
to prerunners as it does to race trucks. Dry sump oiling systems carry more oil and provide superior lubrication
compared to their wet-sump counterparts. A dry sump also allows an engine to make more horsepower because the crankshaft does not splash through the oil sitting in the pan. With a dry sump, the oil is stored in the tank
instead. 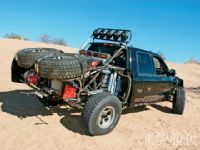 Now you see them, now you don’t. The bedsides cover much of the rear `cage, but the generous wheel openings allow a glimpse of all the hardware and hard work. Shawn first went to Glamis while he was stationed in San Diego as a parachute rigger in the Navy…… 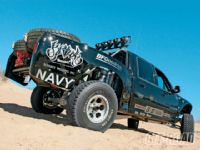 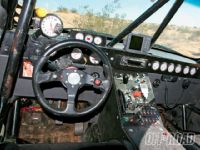 The stock dash is long gone, replaced by this custom-fabbed unit that houses a full compliment of Auto Meter gauges. The tranny shifter and the control for the Gear Vendors overdrive are in easy reach of the driver. That’s not a photo of Alyssa Milano. It’s none other than Lisa Cassel. Sorry gentlemen, she doesn’t have a twin. 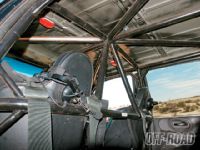 Keeping four people safe requires a strong roll cage. Keeping four people comfortable requires said `cage to be tucked out of the way as much as possible. This `cage hits a home run on both counts. Shawn cut access holes where needed so that the welds could be completed around the full circumference of the tubing notches.