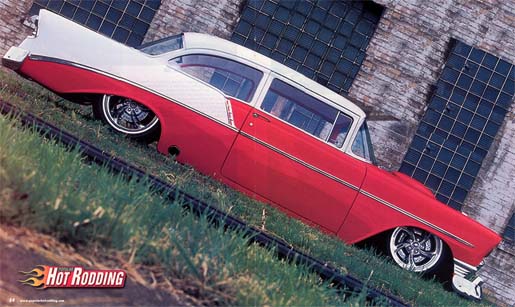 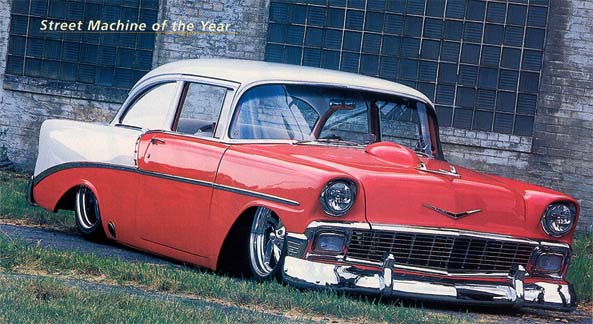 Two years back, North Huntingdon, Pennsylvania’s Denny Terzich turned from the street machine world to build a street rod. After all, many of his favorite ’55-73 cars were showing up largely influenced in styling and build level by the street rod world, and the “Rat Rod” generation was moving into more fashionable cars. Denny, and his dad Denny Sr., built a Whipple-blown, big-block-powered ’33 Ford coupe that was nicely done but not “nailed,” unlike his first ’56 Chevy, his two ’55 Chevys, and the ’62 Chevy bubbletop that he’d built in the past.

I remember it well, hanging around with Denny and getting his observations on a switch to street rods, but disappointment hung heavily on his face.
“Cameron, the next car I build is going to be the baddest-ass street machine possible! I don’t care if it has to have a Top Fuel 14-71 on top. All I know is that I miss the torque and big tires of a street machine.”

Denny Terzich took two years to build his revenge, this awesome ’56 Chevy that achieves all that he couldn’t get out of that street rod. This car, for all of its custom touches, air ride, and styling, is really fast. That what pushed the judging for Street Machine of the Year in his favor-a brutal power is what the scene is all about.

Terzich and family aren’t necessarily wealthy. Yeah, they do okay, but it’s not as if they hired a famous builder to work with them or commissioned a car from a big-time shop, checking in occasionally on its progress. This family lives for cars like this; it’s their passion. Fabricated in the one-car garage of Denny’s grandfather right up until it went to the body shop for paint (a garage so small that they couldn’t fit the rear tires alongside the chassis to bolt them on!), this was a true family project car that is that much cooler because of its roots.

This ’56 was originally being built as a Pro Street looker for his dad, when Denny and Jennifer came off of the street rod project and decided it was the newly invigorated Goodguys/PHR SMOY trophy that they coveted. That 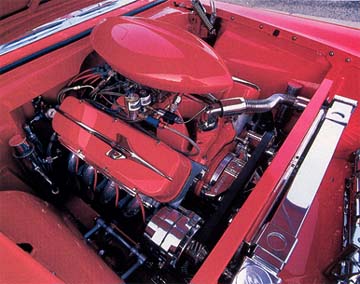 chassis (a Fat Man Fabrication front subframe and a set of S&W rear framerails) had already been painted and narrowed for the big Pro Street meats, but Denny’s dad was happy to give up his project help to refabricate the frame to fit a set of 20×12-inch Colorado Custom “Slater” wheels and 295/40/20 BFGoodrich Comp T/As. How’s that for help from your dad?

Let’s try not to get too far out of order, as they started with the body, cutting the entire floor out of the car for setup on a homebuilt jig. They channeled the rear by 3 inches and mocked the chassis under the jig for a perfect fit and alignment. Part of the numerous custom tweaks here are new rear quarter, smoothed mirrors and firewall, a custom core support, belly pans, and an air vent built into the passenger inner-fender to pump air to the tranny cooler. SoffSeal and Trim Parts supplied all of the resto details before Dave Mathews Auto Body (White Oak, PA) laid down PPG Concept Orange and Chevy Truck White. 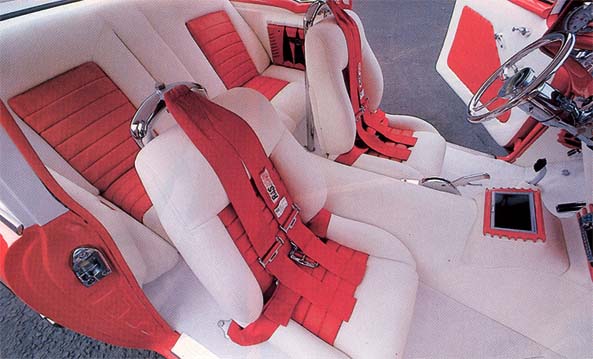 Once the body was mounted correctly, they designed all of the engine, tranny, and rearend mounts (for a Currie billet 9-inch and 4.56:1 ratio) around a proper pinion angle at the actual driving ride height. Air Ride Technologies worked with Terzich to fit its Shockwave system on all four corner, while Fat Man’s Mustang II 2-inch drop spindles and S&W ladder bars brought it together front and rear. Wilwood’s 13-inch rotors and six-piston calipers provide big-time braking power up front, and Wilwood’s 12.25-inch rotor/four-piston caliper combo (with enclosed E-brake, just like PHR’s Project Shadow Camaro) work correctly on the rear. By the way, those front wheels measure 18×8 inches with 225/40/18 rubber, a dramatic difference from front to rear that really projects the street machine look.

For all of the above work and engineering, the engine was really the focus of Dennys’s efforts. Evanuik Performance Engines (North Versailles, PA) used a World Products Merlin II block as a home for 572 ci of big-block power. With 11.8:1 compression (which will run on a mix of pump fuel and race gas without worry), the combination uses Summit Racing’s Trick Flow R-series cylinder heads (with 340cc intake runners and

rectangular exhaust ports), a Brodix high-rise intake (machined down 2 inches for hood clearance), a COMP valvetrain with a custom grind (280/287 duration and .748 intake lift on a 112-degree lobe separation), and 1.7/1/6 rockers are responsible for all that action. An electric Meziere billet water pump, Milodon stroker-clearanced pan, Powermaster electrics, and custom pulleys by Zoops feature heavily in the accessory department. This thing makes big-time power! A giant, 1,145 cfm King Demon carb from Barry Grant helps to produce 895 dyno-proven hp at 6,500 rpm and a broad 782 lb-ft at 5,600 rpm, all before the use of a 300hp Nitrous Works system.

The exhaust on this car is a story in itself. Varacolly Auto Body built headers with 2 1/8-inch primary tubes and 4-inch collectors. Though the custom tubes to route exhaust to Flowmaster two-chamber mufflers were significant, the 24 hours of labor (to route them around the ladder bars and chassis) for the exit tubes and tips were even more work. The rear framerails were welded to the existing frame specifically to make room for a U-cut for the exhaust. 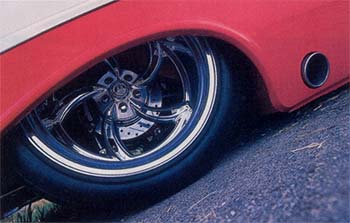 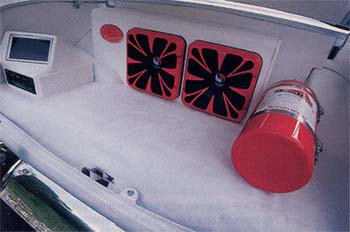 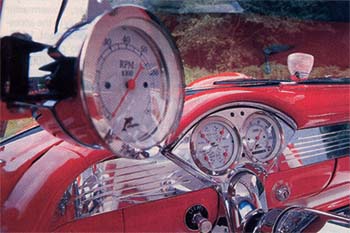 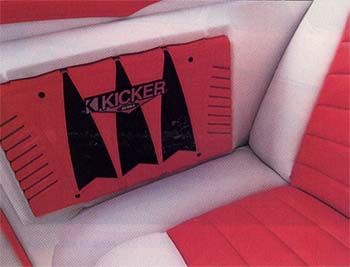 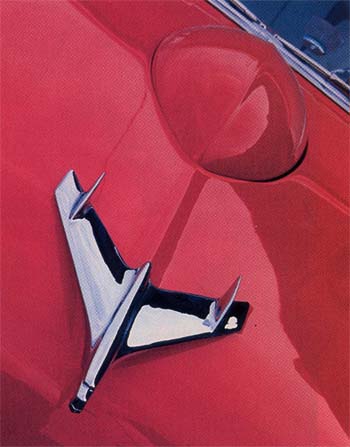 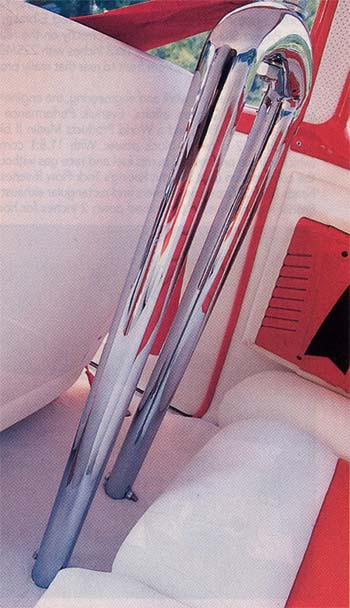 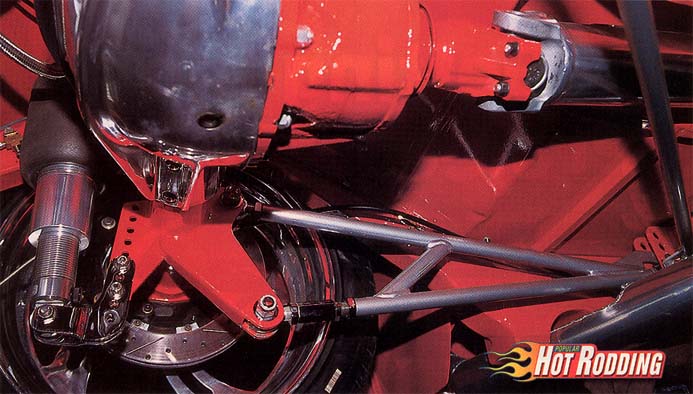 These days, and old-school Turbo 400 trans isn’t going to cut it. Terzich knew that and turned to Rossler Racing for a built TH400 to work with a Gear Vendors six-speed underdrive/overdrive unit, a mechanical combination that would keep the new tradition of electronics and wiring efforts out of the equation. A 10-inch B&M Racing converter set up for stall at 3,500 rpm and a B&M Street Bandit shifter make the power and trans easy to use.

The interior in this ’56 Chevy pushed it over the top, even if it was a bit too much for some of the fans and judges. J.C. Auto Trim (Irwin, PA) used orange and white leather everywhere they could, including over Glide Engineering buckets. Credit the Audi TT as the inspiration for the custom mini-bars upon which the five-point harnesses are mounted. Terzich specified a Pete’s Fabrication dash insert, Dolphin Gauges, Lokar pedals, as well as a full Kicker audio system with eight speakers and two Accelle TV monitors.

You’ll have to check out www.popularhotrodding.com for the rest of the details and a full list of facts and figures. There’s simply too much to talk about on these pages. All we know is that regardless of the thrill of winning the SMOY trophy, young Terzich is going to owe his old man a car very soon. PHR 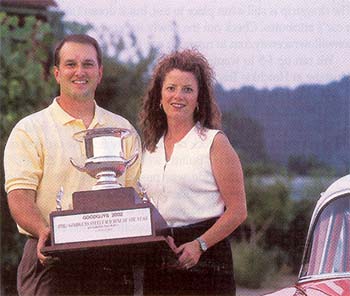 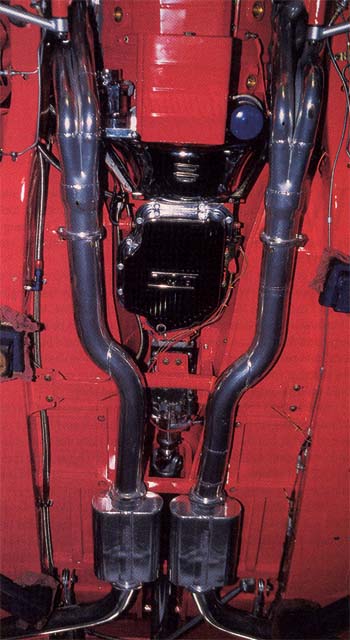