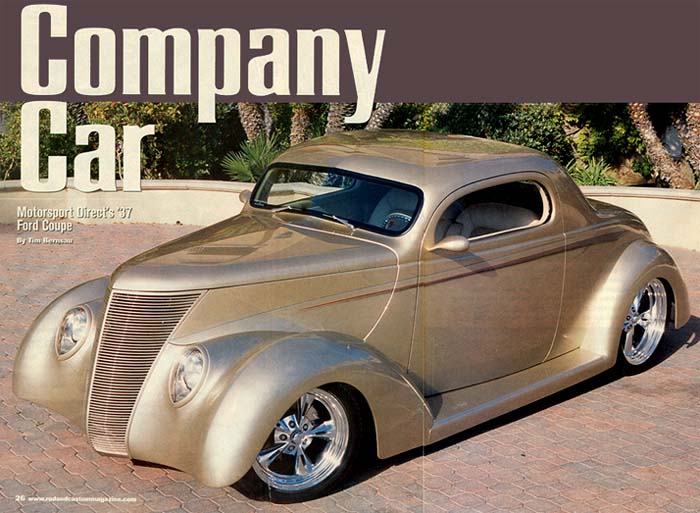 t’s done! Back in the May’02 issue of ROD & CUSTOM. We showed you the concept drawing for a wild ’37 Ford coupe being built under the supervision of Motosport Direct. At that time we put the heat to Jim White,

head honcho at Motorsport Direct in Santee, California, by announcing that the rolling chassis would be on display at the Goodguys Del Mar ’03 show and that the car “should” be finished by the Goddguys show in Pleasanton four

months later. Good thing we said “should” because even the most well planned project car can benefit from a flexible schedule.

It was just a few weeks before Del Mr ’03 when we got a call from Jim telling us that we could look for the coupe near the Motorsport Direct booth when we got to the show. We drove down on Friday to find out just how well the project had turned out. The car, designed on paper by Gary Constable, was built at Norm Francis Street Rods in El Cajon, California, from the starting point of a Minotti body. Norm and his young employee Josh Metivier were with Jim in Del Mar and gave us the complete tour of the coupe while we shot these photos right there on the fairground. There is literally no part of this car that has not been reworked in some way or another, and photos from the buildup have been on display in the Motorsport Direct Web site at www.motorsportdirect.com.

The ground-up project began with the TCI chassis and the extensively hot rodded ZZ4 Chevy small-block built especially for the car by Shave Specialties in Torrance, California. The paint, applied by R&R Auto Restyling, took a slight detour from the flames originally presented in the concept illustration but are fitting with the sophisticated overall theme of the car.

Having seen the high-tech, high-performance, high-profile car completed, and understanding how elaborate the creation of the coupe has been, we couldn’t resist asking Jim if his incredible 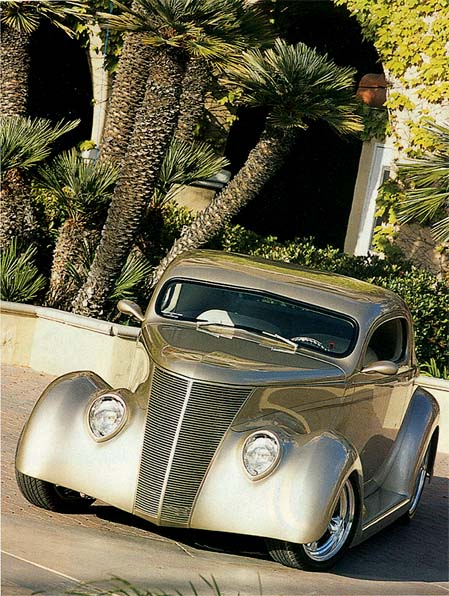 coupe was destined for duty as a display prop for Motorsport Direct or if he actually intended to take it out on the street and put its performance potential to the pavement-dumb question actually. The

coupe wasn’t just built for business; it was built for fun, which means driving it whenever possible. That’s the answer we were hoping for. R&C

DRIVETRAIN: It may look like a gentleman on the outside, but it’s a street fighter inside. The ZZ4, built by Shaver Performance Products, uses 9.5:1 hypereutectic pistons, a custom-ground Isky cam, Pro Action 220cc aluminum heads, a Barry Grant 650-cfm carburetor on a single-plane manifold, and a bunch of other high-performance components, including Zoops pulleys and Sanderson headers feeding a Borla exhaust system. The dyno sheet from

Shaver shows a horsepower peak of 442 at 4,500 rpm and peak torque of 439 lb-ft at 4,600. Transmission is a 2,800-stall TH350 from TCI Automotive with a Gear Vendors gear-splitter. An Inland Empire Driveline shaft spins the 3.70:1 gears in the Currie rearend.
CHASSIS: The ’37 rides on a chassis and independent front suspension from TCI, with a Heidt’s Supride independent suspension system in the rear. Aldan shocks and Wilwood disc brakes are used at all corners.
WHEELS: The only touch for bright stuff on the outside of the car comes from inside the fenders. These slotted five-spokes are from Colorado Custom, with 17 inchers in front and big ol’ 20 inchers filling the rear wheelwells.
BODY & PAINT: A Minotti three-window

coupe was chosen as the starting point for Jim’s ’37 project. Work on the body and the application of the Sikkens special blend Double Champagne paint was done at R&R Auto Restyling in El Cajon, California, with graphics added at Brink Design. Jefferis Autobody provided the one-piece V’d windshield glass.
INTERIOR: R&R Auto Restyling also handled the upholstery, adding sculpted leather to the split bench seat from Wise Guys in Elkhart, Indiana. Jim keeps his eyes on white-face gauges from Classic Instruments and his hand on the Colorado Custom steering wheel on a telescoping column from ididit. Lokar provided the shifter, pedals, and cable. Oval interior lights are from Phipps, and the A/C system is from Vintage Air.