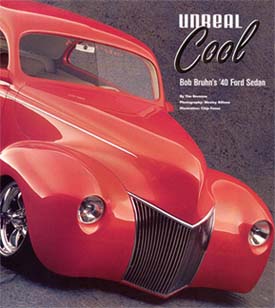 as it a big thrash for Bob Bruhn to finish this car in time for the 2001 Grand National Roadster Show? Yes and no. The buildup was completed just in time to get to the show, where Bob’s ’40 won First Place in the Hot Rod Sedan 1940-1948 class. Then again, he’s owned this car for 22 years.

For the first 10 of those years, the car served as a regular driver until the 327 gave out. Then Bob decided he wanted to chop the top-or maybe not. The decision to hot rod the ’40, countered by indecision as to how and the distraction of a couple other rods, put the project on the back burner for another decade. Finally, two years ago, Bob was ready to start cutting.

Rather than take the coat-of-paint-and-set-of-wheels route, Bob opted for a full top-to-bottom, front-to-back, body-off rebuild. He enlisted the help of longtime personal friends, Sam and Chip Foose, who provided some design ideas and a color rendering of the restyled car. The frame was replaced by a TCI custom frame, and the original steel sedan shell was treated to a bunch of imaginative custom touches-especially impressive when you consider that Bob did the majority of the work himself at home.

During the transformation from neglected street sedan to GNRS-winning hardtop, the ’40 was dubbed Mirage, an appropriate name for a rod as unreal as this one.

For the trip from Solvang, California, to LA for this photo shoot, Bob hauled the ’40 in an enclosed trailer. Of course, we eventually started bugging him about putting the car on the road. The view from the driver seat ought to be orange hood and highway, especially considering how Mirage’s reformation into a street rod actually improved its reliability and driveability. Bob’s got a few more high-zoot rod shows to compete in, but promised us that plans include putting the car on the road by the middle of the year. That’s right about now isn’t it? We know you’re reading this Bob, and we’re looking for your Mirage on the road. 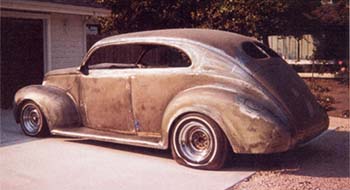 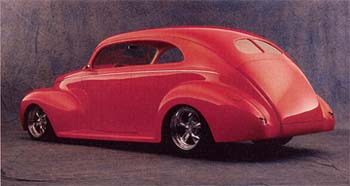 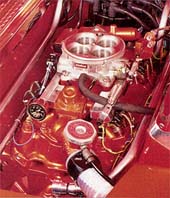 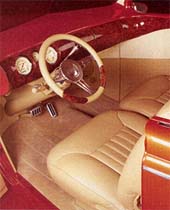 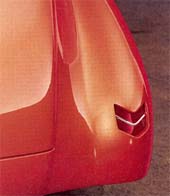 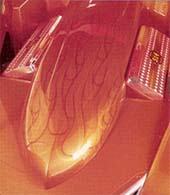 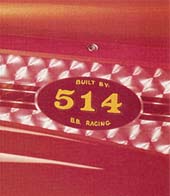 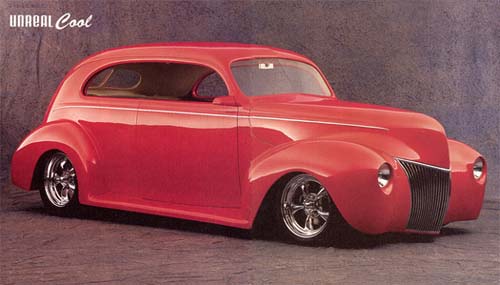 Drivetrain:Bob calls the engine a custom 514 from BB Racing Engineering, but remember the car’s name and don’t believe everything you see. The 350ci ZZ4 crate engine, beefed up with Edelbrock injection and a Bassani custom stainless exhaust system, makes about 400 hp. The TH400 trans is equipped with a Gear Vendors overdrive. The bullet-shaped ‘glass air cleaner draws cool air and looks great. The specially made US Radiator unit was modified to fit underneath the radiator cover, which also hides the serpentine-beltdriven alternator, power brake pump, and air conditioning pump. The plug wires run through massive Bruhn-fabbed valve covers which fit on the base of the stock covers, but give the engine the look of some humongous race engine. The number 514? A combination of Bob’s high school baseball and football jersey numbers.

Chassis: The TCI frame with rear four-bar and independent front suspension was built to Bob’s specifications, with the X-member modified to accommodate the overdrive. The Currie 9-inch Ford rearend packs 3.50:1 gears. Wilwood discs and Bilstein shocks were added front and rear. Air Ride Technologies airbags at all four corners give Mirage its shadow-scraping stance. The exhaust system, driveshaft, and rearend were chromed; virtually everything else, including the engine block and transmission, was painted body color.

Body: The B-pillar was removed and rear side glass modified to create a hardtop effect. The tops of the doors were removed and welded to the roof. Bob sectioned 1 Â¾ inches beneath the lower windowsill and 1 Â¼ inches above the upper sill to effectively give the impression of a 3-inch chop while maintaining the stock height of the side glass. Bob sliced along the roof line from the front, down the deck to the lower rear. He heated the A-pillars at the top, tipped up the loose roof and deck, then heated the lower portion of the A-pillars to tilt back the windshield 4 Â½ inches and relocate the entire stock roof and deck.

A lot of work, but the result is awesome. The wheelwells were cut out at the rear to complement the fastback roof line. The hood was pie-cut and nosed, and custom stainless trim was added to the shaved body panels.

Interior: The material is a combo of tan leather and ultrasuede laid in place by Webster Street Rod Interiors. The dash, housing Classic Instruments gauges, was reshaped and extended 2 inches. The dash wood, installed by Madera Concepts, extends into the doors. The Budnik wheel and the GM Column got some Bob customization. The glovebox holds controls for the Southern Air Conditioning A/C and Air Ride system, and a Phillips radio and global positioning system are buried in the headliner, dropping down when Bob want some music or get lost in Uzbekistan.

Cool Custom Mods: The whole underside of the body, fenders, and floorpan was undercoated with Line-X liner for soundproofing. The running boards were reshaped into the front fenders. The centerpiece for the otherwise stock grille was custom-made from billet. The fuel line is hidden in the famerails. Mirage contains three computer systems and more than 500 feet of wiring. All electronic systems have been tie-wrapped and equipped with quick-disconnect connectors. Bob painted the retractable rear tag orange and white to match the body. The DMV won’t mind once they see how cool it looks. 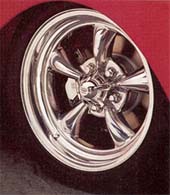