Walt Ast of Atascadero, California, has reached a place in life where he can hit the road on occasion like he used to do in the old days. It’s a place to relax, unwind,, or to a car guy, wind it out. A place where each click from the gasp in the concrete slabs can either raise or lower your blood pressure depending on the angle of your right foot. Those of you with ’32 roadsters with a rumble seat can lay claim to the smallest luggage and wardrobe on the planet, but as for Walt, he planned to pack for the long haul. He decided to look for a cool ’50s wagon with room for the whole family. When he came across this ’57 Pontiac Safari wagon, it was similar to a Chevy Nomad but had a unique style all its own.
The car was torn apart, and the process began to build a high-powered cruiser for the road. The body was removed from the frame and set aside while the chassis was rebuilt. The front suspension was replaced with a front clip from a ’78 Trans Am with disc brakes and the original 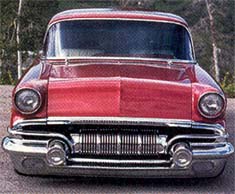 drivetrain removed. An airbag suspension system was also installed for the slammed look. Walt wanted to continue the tradition of “Poncho” power, so a Pontiac 455 with ported heads, J&E pistons, Hooker Headers, and a tri-power setup was installed. Behind the massive torque monster, a GM Turbo 350 transmission was mounted with a 2400 stall speed converter, a B&M cooler and shifter, and a Gear Vendors Overdrive unit behind it. The rear axle was updated with a unit from a ’78 Trans Am.
Once the now-lowered chassis was complete, work began to prepare the body for paint. Minimal work with regard to customizing was performed, with the exception of the shaved door handles and hood. The body was prepped to perfection and spayed with a ’97 Dodge Candy Red in basecoat/clearcoat. Once the chrome was added, the body lit up like a Colorado sunrise in the middle of ski season. It looked equally cool. 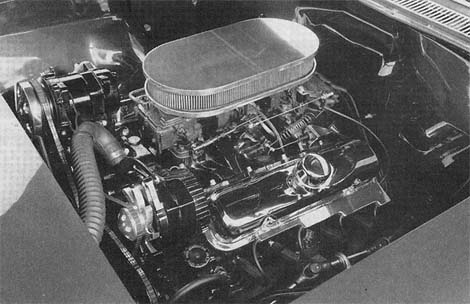 Work was fast and furious getting the car running and functional in the summer of ’98. Everything was running with Dakota Digital gauges inside, Painless Wiring, Billet Specialties steering wheel, and the Vintage Air A/C installed and ready to go. The only thing missing was the interior. Walt had plans to take the car on Americruise that

summer, and nothing was going to stop him. The interior was not complete, but seatswere in place, and by 10 p.m. the night before the Americruise tour was leaving, he was ready to go.
We couldn’t help but notice the car when it arrived in Snowmass, Colorado, and insisted on photographing it immediately. We knew the car was from California, and we would be able to capture the finished interior at a later date. The following summer, we caught up with Walt at the Hod Rod Power Tour kick-off party with his car and now-finished interior stitched in white leather by Adams Upholstery.
Since then, Walt and his wife, Carol, have certainly made use of the luggage space. This beautiful car goes on safari whenever Walt get a chance to hit the road. He has many people to thank for their efforts including Carol, Muffler Man, VRI, Todd at Gear Vendors, and Street Machines by Stedman. Thank to them, every time Walt wants to catch a concrete wave, he’s sittin’ on top of the world. RC 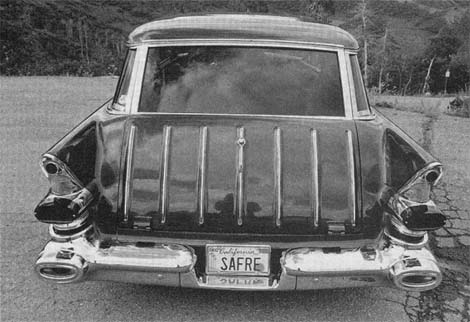 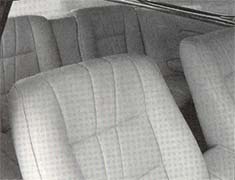 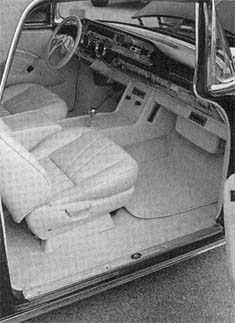