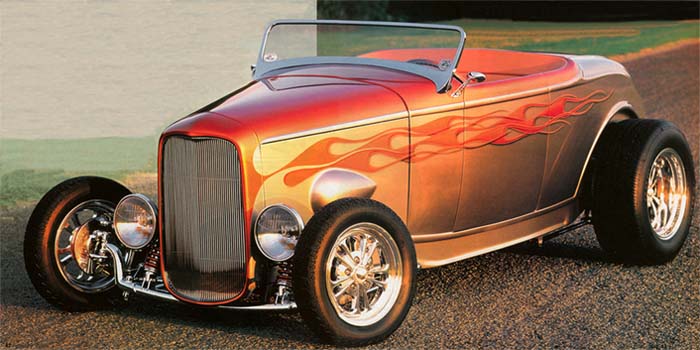 As you know, the ’32 Ford roadster is arguably one of the most popular cars to build, if not the most popular. Some are built with traditional styling in mind and some are not. Some are built purely with high-tech components and modern systems that include everything from heated seats to electronic fuel injection. And with all these great projects being built, often there are those that stand out from the othersâ€”this is one of those cars.
The builders of this fine roadster combined a traditional look with high-end comforts in the interior, all to create one great looking and highly comfortable car. The exterior has features that mimic rods of the past, along with a nostalgia powerplant, but with both the fit and the finish one would expect in today’s high-end cars.

This car continues to prove that the old can be successfully mixed with the new to build one great-looking open-air rod.
To get things started as they should the team at Hot Rod Garage (918/241-6333) in Sand Springs, Oklahoma, was enlisted to turn this concept into a real-world car. Starting with a Rod Bods all-steel ’32 roadster body, everything was mocked up, including the installation of a rolled rear pan out back, to give the car a cleaner, more conservative look. The ’46 Ford taillights were recessed in the back panel, while custom-made teardrops were fabricated on the custom hood side panels to ensure that there would be room for the old Hemi selected for this roadster. A set of ’34 Ford commercial headlights was

incorporated and adds a nice balance to the front of this car.
The crew at Hot Rod Garage (HRG) did a fine job on the fit and finish and all the bodywork before the paint job began, and then House of Kolor Cinnamon Pearl along with Platinum Pearl were combined to make one killer look. Jason Smith and Tom McDonald of the Hot Rod Garage are responsible for the great paintwork. After the slick coat of pearls was dry, color sanding was used to remove any small imperfections and to add the deep luster to this great combination. Greg Tuter was responsible for laying out the hot set of flames that adorn the roadster in the sweet Cinnamon Pearl paint from House of Kolor.
To get the project rolling, a set of American Stamping rails was

THE INTERIOR HAS FEATURES THAT FLOW THROUGHOUT THE CAR. CHECK OUT THE MATCHING ONE-OFF COLUMN DROP, SHIFTER AND GAS PEDAL. THE DOOR HANDLES HAVE BODY-COLOR INSERTS THAT MAKE THEM STAND OUT ON THE BEAUTIFUL ADOBE-COLORED DOOR PANELS.

assembled by the team at Pete & Jake’s. Then they installed a Super Bell 5-inch-dropped axle to get the roadster in the weeds. A set of chrome early-Ford spindles was used up front to keep everything in its place. Out back, a narrowed Currie 9-inch Ford filled with 3:55 gears and a Posi unit was used to get the power to the pavement. Aldan coilover shocks, painted to match the chassis, were bolted in all the way around to help with the ride. The front shocks were fit with custom-made mounts. The Hot Rod Garage modified the front framerails to accept the larger-than-normal drivetrain, and the front framerails were pinched and flush-fit with the grille shell. Custom crossmembers also were used throughout the chassis. To keep the project headed in the right direction, a Flaming River Vega steering box was adapted to the ’32s framerails. To keep the car stopping on a dime, polished Wilwood disc brakes were bolted to all four corners. When it came time to bolt on a nice set of rollers, Colorado Custom 17x10s were used out back wrapped in BFGoodrich 275/ 60-17s, and 15×4.5s were used up front with Kleber 145-15s.
To say this car has a great hot rod engine is an understatement. Jon Barrett Hot Rod Engines in Oklahoma City, Oklahoma, performed the

machining chores for this ride. A ’56 Chrysler 354 received the nod for the car. The block received its fair share of attention, with a 0.030-inch bore and stuffed with forged pistons that result in 9.5:1 compression. A Crane camshaft and double-roller timing chain were used, and the stock heads were filled with stainless valves and topped by a Hot Heads manifold delivering the mixed fuel and air. To get the fuel needed for the early Hemi, a pair of Barry Grant 525cfm Road Demon Jrs. was used. Joe Park fabricated the air cleaner that sits atop the beautifully sculpted engine. Moon valve covers are painted to match and add that trademark Hemi look. An MSD ignition system helps burn all the fuel that is exiting, thanks to a set of HRG-fabricated stainless headers. Running up through the chassis is the custom exhaust tubing flowing into a set of polished Magnaflow mufflers. Helping get the power where it’s needed most, a Chevrolet Turbo 350 with a B&M stall converter was incorporated. A Gear Vendors overdrive was bolted to the tailshaft to lower the rpm at highway speeds.
Now for the creature comforts that adorn this beautiful roadster. Chuck Rowland at CAR Upholstery (918/437-4500) in Tulsa, Oklahoma, did a spectacular job covering the interior in adobe-colored Ultraleather. CAR built

the custom seats that provide the comfort and style possible for the passengers. The custom dash insert was built by Jim Smith at HRG, where the roadster’s vitals are read through a set of Auto Meter gauges to let the driver know that everything under the hood is running just as great as the car looks. Keeping both hands on the wheel isn’t a chore anymore thanks to the Budnik Flatback steering wheel. Getting the spark to all the places where it needs to be is accomplished thanks to Ted Rea and a Centech wiring harness. Chuck Walker at HRG did an awesome job on the interior by incorporating wheel design throughout the complete interior. The design flows through such pieces as the column drop, shifter, pedals and the exterior mirrors. Custom sound is provided thanks to the hemi power coming out from under the hood.
All we can say isâ€”this is one cool roadster. Paul Stephens and the skilled team of builders at Hot Rod Garage have put together a winning package. While attending both NSRA and Goodguys events, we are sure Stephens and his roadster will take their fair share of trophies, which already include a Boyd’s Pro’s Pick Righteous Roadster Award. We look forward to seeing more of this cool Ford in the future and we will be looking for the next ride to come from the team at Hot Rod Garage. SRB

GETTING A CHRYSLER 354 TO FIT INTO A ’32 FORD ROADSTER IS NOT EASY. THE BRIGHT, POLISHED
ACCESSORIES LOOK GREAT ATOP THE CINNAMON PEARL POWERPLANT. 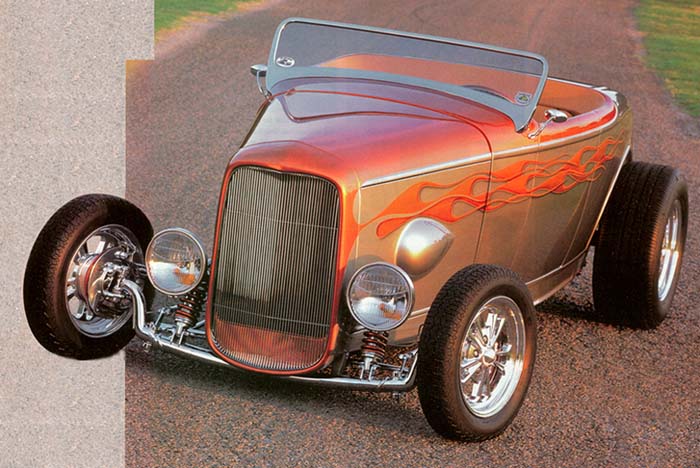 Notice how the Cinnamon Pearl flames are joined by a single platinum flame, providing a great looking contrast. 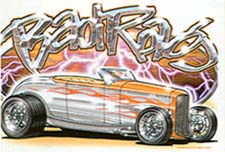 Here is where it all started: a rendering from Jay Werner Designs, which did a great job designing this cool-looking ride. 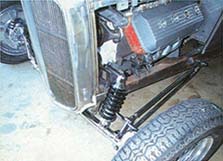 Mocking up every little thing helps result in a great finished product. The front straight axle is a 5-inch-dropped Super Bell unit. 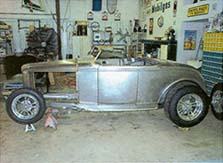 The sheetmetal components are fitted to the newly completed chassis. 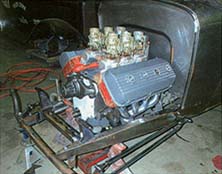 The 354 Chrysler demanded a lot of fabrication to fit into the ’32 Ford frame and required custom crossmembers and mounts.

The roadster’s custom matching interior features are shown here shortly after completion in the mockup stage. There were no shortcuts taken on quality. 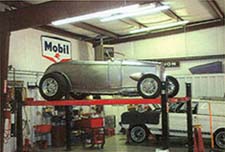 The car is completely assembled, with all the metal fabrication completed and ready for disassembly and paint. 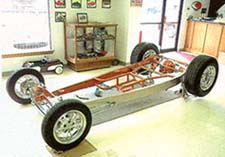 The painted frame awaiting reassembly is the first step in the final buildup. Note how detailed the chassis components are, right down to the Cinnamon Pearl-colored coilover springs. 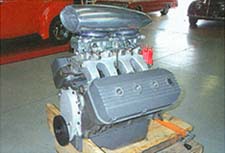 The Chrysler 354 waits its turn to receive a coat of color and polished goodies, along with a little speed equipment.

The completed powerplant is at home in the chassis awaiting a driveshaft and valve covers for the trademark Hemi heads. Look at the attention to detail on the frame and engineâ€”nothing gets overlooked. Notice how such things as the distributer cap are painted to match.

Here is a shot after the body had been painted and color-sanded. Greg Tuter has laid out the flames and is waiting for the back taping before spraying them with the same Cinnamon Pearly House of Kolor paint.

The body and chassis have been rejoined for assembly of the body panels, wiring and interior. 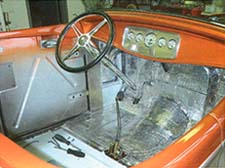 The interior is being assembled. Insulation was added to make the ride a little cooler and to reduce the noise a little. The roadster is now ready for the adobe-colored Ultraleather and custom seat.