By: Mike Harrington
Reprint from Super Chevy Magazine, June 2008
Photography by: the Author 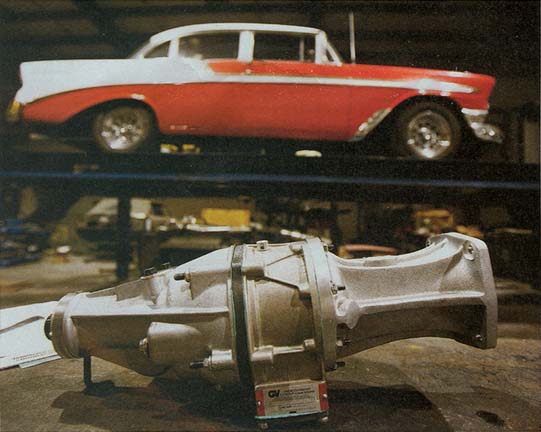 This isn’t the first time Super Chevy magazine has examined and installed a Gear Vendors under/overdrive gear-splitting unit. However, it’s been a few years since the last install article. With freshly cut government checks in many hands and the price of oil more than $100 a barrel, this might be a way to upgrade our Bow Ties with bolt-on economy and performance.

What exactly is a Gear Vendors unit, and how does it work? No doubt a majority of Chevy owners are already equipped with factory transmissions such as the Powerglide, TH350, TH400, 799-R4, 4L60E, M21, M22, and T-10. Simply put, a Gear Vendors unit replaces the existing tailshaft housing on any of these transmissions and adds an extra Overdrive gear of 0.78:1 and the ability to split the already existing gears in the transmission. A three-speed automatic transmission will now become a six-speed, a four-speed automatic will become an eight-speed, and the same applies to the GM manual transmissions as well.
There’s an added fuel economy gain with one of these units (if you can keep the throttle off the floor). For example, a 3.73 differential at highway cruising speed will experience a 22 percent rpm drop and feel more like a 2.91. Virtually all three-speed

automatics (like the Turbo 350 that’s in this ’56 Chevy) have the same ratios within a few hundredths of each other: 2.5 first, 1.5 second, 1.0 high. This means a transmissions takes 2.5 engine revs to turn the driveshaft once in First gear, 1.5 in Second, and is direct drive 1:1 in high gear.
Gears are multipliers of torque, and since the math of horsepower is torque x rpm / 5,252 = hp, putting a 2.0 gear between First and Second is going to keep the torque multiplication and engine rpm both high, which means more horsepower getting to the rear wheels. If we can then put a 1.2 gear beyond Third, we now have a close-ratio six-speed overdrive trans with four underdrive power gears, a direct-drive high gear, and an Overdrive cruise gear.
Gear Vendors’ under/overdrive unit can be used to double the underdrive performance ratios and provide

overdrive cruising economies. Take a look at the tables on the next page for further explanation of transmission and differential ratios.
By now many may be thinking, “Sure, it’s nice, but if I want an overdrive, I’ll just find a 700-R4 at the local Super Chevy swap meet, thank you.” True, a 700-R4 swapped into a vehicle would be good, but it really comes down to how you drive your vehicle. If you ride idles off the trailer and into a parking spot at the local show, then idles back onto the trailer a 10th of a mile away, installing a Gear Vendors unit on your vehicle will serve no benefit other than bragging rights. If you drive your vehicle like the 30 True Street participants at the recent Baton Rouge Super Chevy show, a Gear Vendors unit could greatly benefit your highway cruise and quarter-mile times.
Put the dash switch in manual mode, put the shifter in First, hit the

gas, and the overdrive will shift while accelerating and First gear begins to wind out. The vehicle accelerates through First and First-over and is now 28 percent farther down the track before you have to move the shifter up to Second. When the shifter is moved to Second, you can leave the overdrive engaged or hit the button right when Second grabs and split the gear just the same way First gear was split. All this keeps the engine revving in the sweet rpm range while torque and horsepower are dumped out to the rear tires.
With Auto Launch and M21 or 22, the vehicle will leave the line in First and shift automatically without a clutch to First-over, which is only 4/100 different than if you shifted into Second/ You can further exploit the timeslip by shifting to Third and then clutchless to Third-over, which is only 1/100 different than Fourth, and do the entire dragstrip run with just one clutch depression. 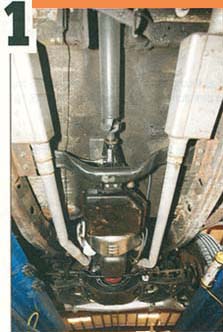 A worm’s eye view of a ’56 Bel Air prior to the assembly of the Gear Vendors Unit. 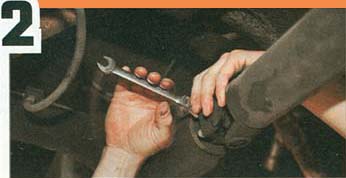 First things first: Remove the old driveshaft. The driveshaft will eventually have to be shortened approximately 13 inches on this ’56 due to the length of the Gear Vendors unit.

The next step is remove the tailshaft housing. 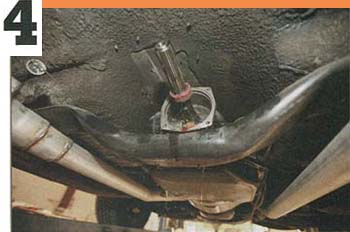 Houston, we have liftoff. Take a few minutes to clean some of the spillage and the area where the new gasket will be installed. 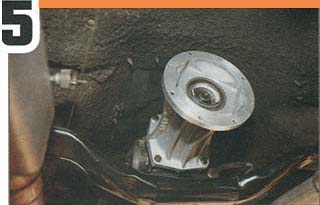 Fitting the adapter piece on a Tri-Five Chevrolet is no problem, as there is ample floorboard room under these vehicles. On other GM vehicles like the A-body, it may be necessary to peen out a tunnel or order a crossmember from Gear Vendors that drops the transmission an inch. 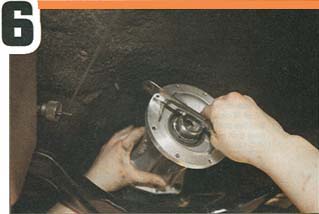 Next, the coupler is installed and checked with a straightedge to make sure it’s flush with the surface. If not, shims are provided to move the coupler forward if need be.

Once we are satisfied it would fit properly, we took the adapter out and bench-installed it with the coupler to the under/overdrive unit. 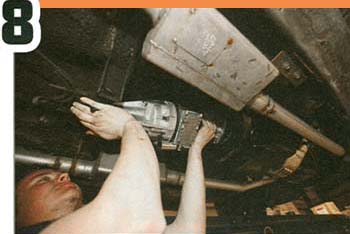 Once it was all together and one complete unit, it was bolted back onto the TH350. We didn’t have to unbolt the transmission at all. All that was required was to remove the tail housing and install the Gear Vendors unit. 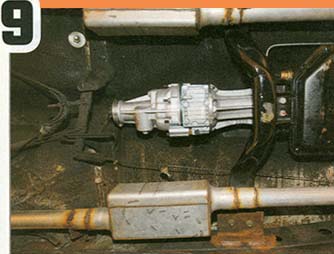 A final shot of how the Gear Vendors unit looks once it’s installed. 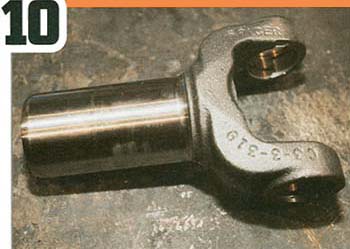 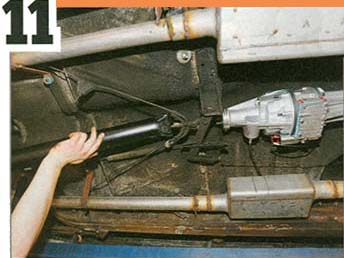 Simply install the shortened driveshaft and that’s about it for most of the major wrench turning. 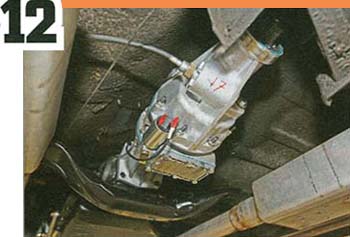 The wiring and speedo cable are installed again. If you have electronic gauges, the Gear Vendors kit comes with a vehicle sensor (VSS) for the speedometer. 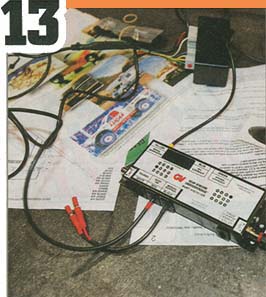 The computer wiring is really a simple matter. If a hole does not already exist on the lower firewall, one will have to be drilled for the electronic controller. One wire goes to the 12-volt source, the other is the ground, another goes to the dash switch, and another to the foot switch. The last two wires go to the solenoid on the Gear Vendors unit and the VSS. A total of six wires, and it’s no problem. 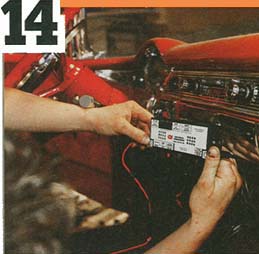 We decided to keep the dash on the ’56 as stock looking as possible. 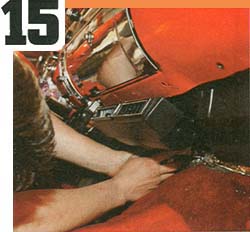 The electronic controller was hidden on the floor under the dash. 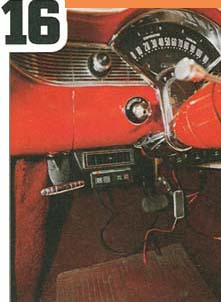 The dash switch was also installed low so it would not be prominently visible on the stock-looking dash. All the driver has to do is reach down and flip the switch to manual or auto mode. Once we mounted the dash switch, the wiring was routed and tucked away out of sight and mind. 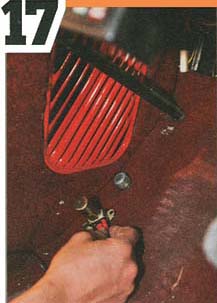 The floor switch looks just like an OE dimmer switch. In this case, we just used the OE dimmer switch since the ’56 already had an ididit column with the high beam switch on the column. 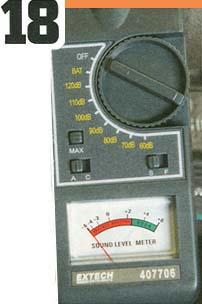 No, this little gizmo is not part of the Gear Vendors unit. It’s a decibel meter reader. We took this along for a ride on the highway. When cruising at about 65-70 mph with the overdrive unit off, the rear gears were screaming and crying to the tune of about 87 dB in the cockpit. When the overdrive was turned on and the rpm dropped 22 percent, the dB reader measured in at 78 dB, almost a 10-point drop. Of course, with a drop in rpm comes a gain in fuel economy. 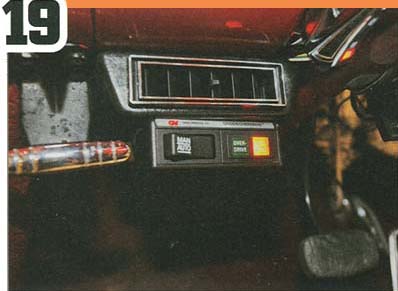 If everything is wired correctly, the red light will come on when first fired up and we’ll be ready to roll and put this Bel Air on the highway.