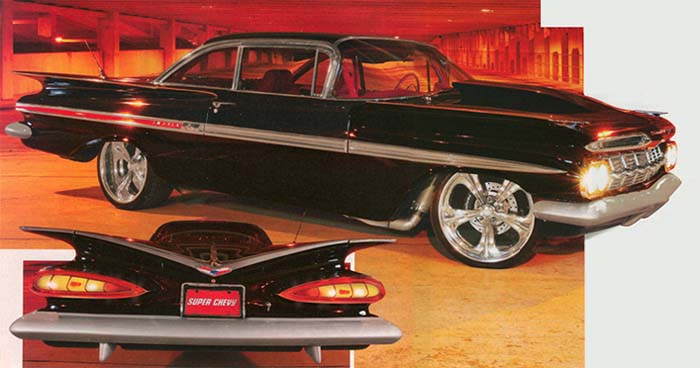 ROD NANCE’S 10-SECOND ’59 IMPALA GETS THINGS DONE IN A HURRY.

We at Super Chevy have all kinds of interests within the realm of cars. Previously I’ve harped on about road racing—hell, I’ve driven a Honda minivan at 10/10ths on a road course (I have real issues, I know); Editor Jim Campisano (aka “Godfather of Speed”) loves taking his fleet of vehicles down the quarter-mile—any time, any place; and Associate Editor Mike Harrington, well, you never can tell with him. Last I heard he wants to do some land speed racing out in Bonneville.
I digress. The point is that we all, as car enthusiasts, have a common bond—we are suckers for big power. Supercharged, turbocharged, sprayed, jet-fueled—it just doesn’t matter. Bring it on. Personally, I don’t think you can ever have enough. Many of the people we encounter, all over the country, feel the same way.
When we met Rod Nane and his ’59 Impala in Florida, we knew he fit the profile. His car is fast. Stupid fast. Almost scary fast. I-feel-like-I’ve-been-shot-out-of-a-howitzer fast. You know the kind. On first glimpse, it appears stylish, and then upon closer inspection, especially after seeing the cowl hood and bazooka tube-like exhaust pipes

down through the wheelwells, you can see that this brute is all business.
While doing the photo shoot, we all stood around salivating, while Rod looked on, seemingly concerned for his safety.
Rod always dreamt of owning this exact car, a ’59 Impala. However, he knew he wanted to do something different with it—make the vehicle a personal statement, something that he could really be proud of. Rod came across the Impala by pure chance. A few years back, while vacationing at Disney World with his wife, Jodi, and their two sons, Rod saw a suspicious advertisement in the Sunday paper. The listing mentioned a completely intact ’59 Impala, with a bone-stock 6-cylinder lump, and a two-speed auto tranny. Nance’s wife offered the idea to go check the car out, and the opportunity was just too much to pass up. The vehicle was delivered to his home the next day.
Nance, his cohort of various supporting shops, and friends have been working on the car, on and off, for about four years. The block is a Merlin 9.5 worked over by Ohio Crank to displace 509 cubes, with Dart Pro1 aluminum heads, and

“There’s really nothing like it,” he said, with a huge grin across his face. “I remember a time when I was taking my buddies out for a ride, and I had the needle buried—that’s past 160 mph.”

JE supercharger-friendly 7.9:1 compression pistons. A Dart single-plane intake manifold resides above all the shiny bits, and connects to the real monster under the hood, a ProCharger F1R supercharger, that puts out no less than 17 psi of boost (Nance mentioned that he might run it up as high as 19 psi shortly). A Griffin intercooler helps keep the intake charge on the chilly side. To cap off everything, an NOS Sportsman Fogger system, with an extra 120 hp on tap, really makes this a work of art, a big-block that makes 808 hp, and 1,000 lb-ft (that’s one thousand, for those numerically challenged) of torque, all at the rear wheels.
Nance runs a GM Turbo 400 transmission, with a Gear Vendors overdrive. Moser does the rear end work, with a 9-inch assembly, holding 3.70 gears, and a Detroit Locker limited slip. Wheels are Billet Specialties, the Rat Tail model to be specific—8.5×20 up front, and 10×20 rear. Those lovely wheels are wrapped in Nitto NT555 rubber (245/30ZR up front, 285/30ZR out back).
Air Ride Technologies is the main source in the suspension area, with a 6-inch drop available, both front and rear. Nance also added a plethora of Hotchkis suspension parts: sway bars (1 1/2-inch front, 1-inch rear), upper and lower control arms in the rear, and an adjustable Panhard bar. In short, this car isn’t lacking much in the suspension department, and it handles perfectly.
The interior looks just as exceptional as the exterior, with detail-oriented touches like marine-grade red carpet, custom leather/suede seats, Auto Meter Gauges, and a B&M shifter. There’s a full-on Pioneer stereo with Audiobahn amps, as well as air conditioning. The rollcage, which looks like something out of the Guggenheim, is simply awesome. It includes removable sidebars and a removable crossbar. The only remaining stock piece is the steering wheel, which gives the Impala a nice period-correct look.
When we finished wiping up our drool during the photo shoot, Rod and the crew sat around a parking deck, talking about the ’59. Nance smiled and gave us some insight about the car.
“There’s really nothing like it,” he said, with a huge grin across his face. “I remember a time when I was taking my buddies out for a ride and I had the needle buried—that’s past 160 mph.”
The speed comes with at least a small sense of trust. “It’s so fast that it pushes on your chest at takeoff,” Rod said, “but I am so confident in it at speed. It’s just made for the road.”
If your thinking this ’59 is just a show car and street cruiser, Rod has done the Hot Rod Power Tour more 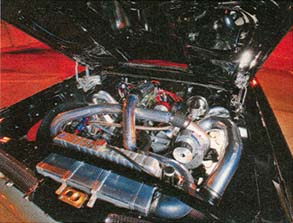 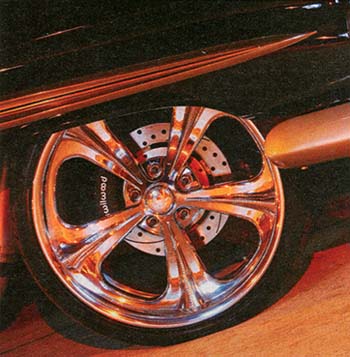 than once. The first time, in 2003, he drove it 3.868 miles round trip with his wife and both sons in the car (with no mechanical failures). Rod’s not averse to talking it down the drag strip, either. His best pass with 17 psi of ProCharger thrust (sans nitrous) was a 10.51 at 131 on the 20-inch Nittos. With the added boost and 120-shot, he’s hoping to run in the 9s. Not bad for a car that’s all steel except for the bumpers (even the cowl hood is metal) and that weighs nearly 2.5 tons with driver. 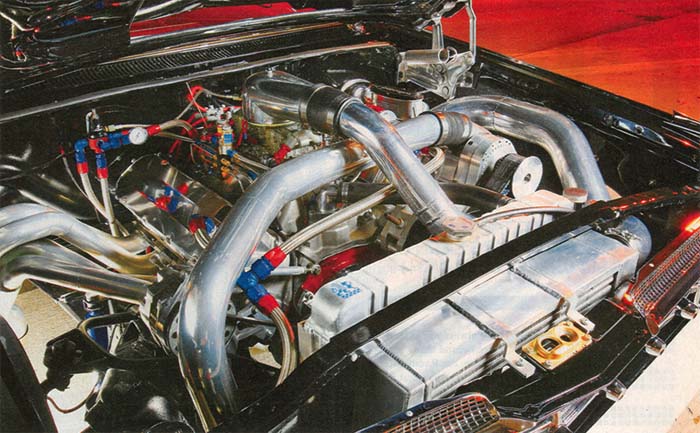 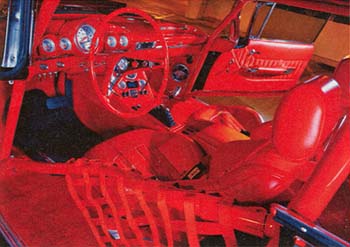