By: Bob McClurg
Reprint from Super Chevy Magazine, November 2001
(Scroll Down for Pictures)

Orange, California’s Joe Mangione is a man on a mission. The owner of Pony Concept Cars, which specializes in the “resto-rod-ation” of vintage ’60s through mid-’70s musclecars like Camaro, ‘Cuda, Mustang, and others, is pushing his message. Why not have six-speeds forward instead of three, with no anemic, lockup high gear?

Of course, today, the factory overdrive transmission has made a huge comeback with models like the GM 7004R4, the Ford AOD, and the Ford AODE. But why?

“Fuel economy. Plain and simple,” says old Joe. Truth is, these transmissions have largely regained their popularity because their “lock-up torque converter” design meets the required federal emissions standards, or the EPA’s Corporate Average Fuel Economy, (CAFÃ‰) guidelines. However, unlike their predecessors, these latest generation factory overdrives are electronically activated and set up to function at pre-specified, “emissions friendly” computer-controlled shift points.

The downside, of course, is that the torque converters on these new

automatic overdrives seem to lock up at the most inappropriate time, usually in the low-to-mid-high rpm ranges, just when you don’t want them to. The end result is that performance becomes the tradeoff for fuel economy. Such a deal, huh?

When it comes to the street machine set, GM’s latest generation electronic overdrive gearboxes have experienced relative popularity with transmission swappers. However, the popular misconception is that while one of these transmissions is expected to provide the street machine enthusiast with the affordable fuel economy he or she so desperately needs on long road trips and around town, there is actually very little, if anything, to be gained in the performance department.

“Whenever someone starts talking ‘overdrive, or underdrive’ transmissions, you usually draw a mental picture of a huge motorhome, or some piece of heavy-duty road equipment lumbering down the highway,” say Mangione. “The fact of the matter is that overdrive transmissions have been used in passenger cars for close to 60 years. Cadillac had them. Even AMC had them. When high performance became a huge selling point in the early ’60s, overdrive transmissions faded from view, if only temporarily.” 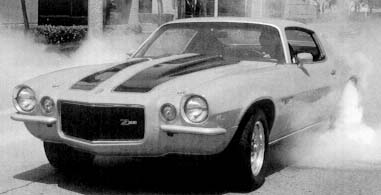 More grim reality. These latest generation, electronically managed automatic overdrives were not, repeat, not meant to handle 400-plus horsepower loads without internal modifications. And, said modifications are going to drive the cost of an overdrive transmission conversion all the higher.

A Gear Vendors under/overdrive transmission provides you with twice the gear ratios you previously had. That’s right, six-speeds forward at the mere flick of a switch! Most importantly, you are getting this horsepower and torque increase without having to internally modify your engine in any way.

For example, on both GM’s popular Powerglide and the Turbo 350/400 automatics found in the majority of your classic Camaros, you have First, Second-over, Third, and Third-over gears to choose from either manually or electronically, via a special Gear Vendors electronic control module.

But what actual gear ratios would your vintage Camaro ultimately have? Take a look at the accompanying Gear Vendors chart, which uses a GM TH350 automatic as an example, and see for yourself.

To manually shift the Gear Vendors under/overdrive unit, you would first pull into Low, accelerate, and then hit the floor-mounted control button. A green light will appear indicating overdrive. In other words you are now in First-over which is right in between First and Second gear. This practice is called “gear splitting.” Then you would shift to Second with the control button off. You would then rev back up and hit the control again, and you’re in Second-over. To achieve Third, and Third-over, you would again repeat the same procedure.

However, should you not want to go through all of this, you can switch the Gear Vendors electronic control module to the automatic setting, and the unit will do the work for you. You can also shut the Gear Vendor’s unit off entirely, and let the stock transmission do all the work.

We had also previously mentioned the “load capacity restrictions,” or the shortcomings of a stock GM 7004R4. Gear Vendors warrantees its under/overdrive units to handle 1,200 hp, without any modifications, and can set these units up to handle as much as 2,000 hp.!

How much does one of these units cost? Approximately $2,200 to $2,400 for your average classic Camaro/Chevelle/Nova conversion. Obviously, that’s slightly higher than the $2,000 7004R4 conversion fee. But you don’t get compromise, you get exactly what you want, power, torque, reliability, economy and performance.

For that amount of money, you get the Gear Vendor’s under/overdrive planetary transmission, coupler, and cast-aluminum transmission tailshaft adapter, and electronic control module, a floor-mounted “dimmer-type” foot switch, a speedometer cable convertor,

all the necessary wiring harnesses, and above all, both “short version,” and “long version” installation manuals. And, Gear Vendors under/overdrive transmissions come with the best warranty in the industry-2 years for non-commercial use with a 30-day “drive/use” money back guarantee if not totally satisfied! Talk about confidence!

“The beauty of these units is that you can install them in any classic, or late-model Camaro built,” says Mangione. “To perform the conversion, you have to remove the stock TH350/400 tailshaft, and driveshaft,”-driveshaft not included in the kit. “You set aside these parts. And, should you ever decide to sell the car, you can remove the Gear Vendors under/overdrive transmission, replace the stock Camaro tailshaft and driveshaft, and use the it in something else!”

Although 90 percent of your Gear Vendors over/underdrive units are a bolt-in proposition, there are a few exceptions, one of them being the Second-Generation Camaro, like the Hugger Orange, ’71 Z28 belonging to Dr. Sy Barton pictured.

“With these cars, the center of the transmission tunnel features a double-thickness, 3-inch-stamped sheetmetal support arch,” says Joe. “In order to clear the Gear Vendors over/underdrive unit it’s necessary to remove this piece. However in doing that, it by no means compromises the overall structural integrity of the Camaro floorpan, as this is a non-stressed area.”

But what happens should you grow tired of your current ride and want to switch to another? That’s a fairly large investment to leave behind. Gear Vendors has an exchange program in which they will take your old Gear Vendors under/overdrive unit in trade, or, they will re-fit the very same unit with the new tailshaft adapter you now require. Talk about a company that stands behind its product!

Now follow along with us as Pony Concept Cars installer Jim Bentley shows you how easy it is to “split gears” the Gear Vendors way! 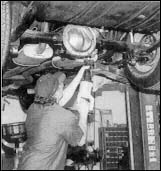 3. Next, our installer removes the Z28’s exhaust system, as it will greatly impede our overall installation progress.

6. Here the installer is unbolting the series of 9/16-inch bolts which retain the 350’s aluminum tailshaft assembly in place. With the automatic transmission fluid completely drained, the stock TH350 tailshaft is removed and stored. 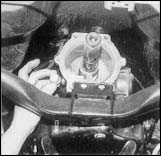 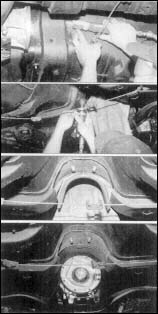 10. However, before going any further, Bentley uses an air cutter and a die grinder to trim away the lower portion of the 3-inch stamped-steel seatbelt support brace located midway on the transmission tunnel. This modification in no way compromises any of the Camaro’s structural integrity. 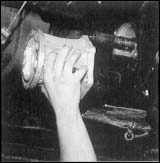 8. The installer test-fits the one-piece, CNC-machined Gear Vendors transmission coupler to the tailshaft of the GM Turbo 350 transmission. The unit is firmly bolted into place using a series of 9/16-inch factory bolts. 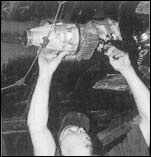 11. With the necessary clearancing accomplished, it’s time to bolt in the actual under/overdrive planetary transmission in for good, using a series of 9/16-inch bolts. 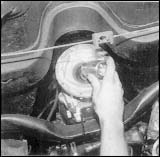 9. In order to achieve proper coupler-to-mainshaft clearance .040 inch of shims were installed at the mainshaft end of the coupler. This is an extremely important part of the overall installation process! 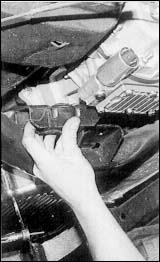 12. Bentley then reinstalls the factory transmission mount and transmission yoke back in place, using the same factory 9/16-inch bolts. 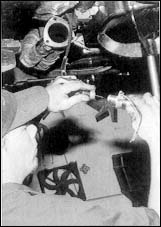 13. This procedure is followed with the installation of the speedometer cable adapter which uses a special drive pin to interface with the GM factory speedo cable. Once this unit is linked together, it is tie-wrapped from harm’s way. 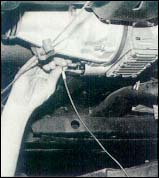 14. At this juncture, our installer routes the Gear Vendors wiring harnesses up through the engine compartment and through the firewall.

16. With the Doc’s Z28 back on the ground, Bentley runs the solenoid wires, etc., up through the engine compartment for electrical hookup, using the schematic provided in the assembly manual.

17. The actual “brain,” or controller assembly, uses a Velcro mount and is mounted in the glovebox with a hot lead drawn from the ignition switch. This unit utilizes “telephone type” electrical jacks. Simple, yet effective.

18. This shows you just how easy it is-using the Velcro method-to install the under/overdrive switch assembly, mounted directly below the headlight switch on this car. 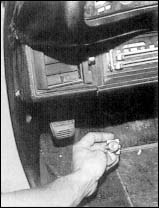 19. Here is the placement of the foot switch located on the floorboard, approximately 1 1/2 inches from the headlight dimmer switch. 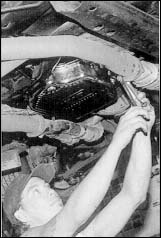 20. Back in goes the Camaro’s exhaust system, and finally… 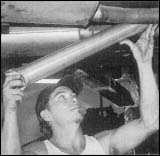 22. Here’s how the finished product looks. And that’s that!