DEVIN MEUCCI’S PRO TOURING CHRAGER IS ONE OF THE BEST OF ITS KIND IN THE COUNTRY. THE CAR SITS JUST RIGHT, HAS AN AWESOME PAINT SCHEME AND FEATURES A COMFORTABLE AND ELEGANT INTERIOR.

WE WERE TALKING TO DEVIN MEUCCI WHEN THE TOPIC CAME UP ABOUT HOW DIFFICULT IT IS TO FIND A ’69 CHARGER IN SOUTHERN CALIFORNIA, BECAUSE MOST WERE GOBBLED UP BY THE STUDIO WHEN “THE DUKES OF HAZZARD” SHOW WAS ON TELEVISION. I ALSO MENTIONED THAT TWO FOR MY FRIENDS WERE IN CHARGE OF THE TRANSPORTATION DEPARTMENT OF THE SHOW WHEN THE CARS WHERE BEING SCRAPPED OUT, AND DESCRIBED HOW THEY MADE THE 383 AND 440 ENGINES AVAILABLE TO MEMBERS OF MY CAR CLUB. MEUCCI SAID HE AND HIS BROTHER WATCHED THE SHOW RELIGIOUSLY, AND THAT’S WHEN THEIR LOVE FOR CHARGERS BEGAN. FORTUNATELY, IN WASHINGTON STTE, CHARGERS WERE PLENTIFUL, SO, IN 1990 HIS BROTHER BOUGHT A MATCHING-NUMBERS ’69 RT/SE. TWO YEARS LATER, MEUCCI PURCHASED HIS OWN CHARGER AND DROVE IT IN HIGH SCHOOL DURING HIS SENIOR YEAR, AND TO COLLEGE AFTER THAT.

Both Meucci and his brother are still proud owners, and he says there is nothing as therapeutic as looking out over the massive hood and unleashing the big-block engine. On the morning of January 9, 2005, that same hoodâ€”as well as the rest of the carâ€”was missing from the parking garage of his downtown Seattle apartment. The car was stolen, and he naturally thought he would never see it again, but four weeks later the Charger was involved in a car chase with the Washington State Patrol, as it was used as a getaway car linked to several local burglaries. The Charger was recovered, but the recently rebuilt 282 was toast, the quarter panels were smashed, and the factory interior was uninhabitable.

It was then that Meucci decided to get the Dodge back into shape. He said that, having remained single with no children, his career (and a few credit cards) would afford him the ability to execute a lifelong dream: to build the ultimate custom Charger of all time.

his time was most efficiently spent at the office earning money and researching parts, his first goal was to hire the ultimate build team.

His search led him to Chris Odom, the owner of Extreme Metal and Paint in Anacortes, Washington. Odom suggested he should have a design to shoot for, and referred him to Jason Rushforth for the design work. He also suggested Scott Stratton of S&S Custom Upholstery for the upholstery theme. Don Gould of FBO Systems in Cottage Grove, Oregon, did the engine work, and Bill Reilly did the suspension work. Along with Chris Odom and his employees, Alan Mitchell, Rick Federmeyer, Jake Oatman and Jason Pelkey, all worked on the car and became what Meucci considered the most competent build team in the Northwest.

The project had gotten under way when Rushforth finished the design work. He said Meucci was open to all his design ideas, but the first thing he did was to show him other customer cars that were built by other top-name builders.

Rushforth also invited Meucci to attend the Goodguys Nationals in Columbus, Ohio, where he was able to see all

The body was in poor condition when it was recovered (after it was stolen), so Extreme Metal removed and replaced the rear quarters. The shop also shaved the side marker lights and hand-fabricated a chin spoiler. In preparation for the installation of large wheels and tires, the wheelhouses were stretched and raised, and the engine compartment fender panels were smoothed. The bumpers were also narrowed and smoothed to blend into the body better. A custom billet gas cap replaced the original. After the rear quarters were installed and the front fenders were worked over, the body required plenty of finish work to get it perfect. The body was coated with primer and then block-sanded until it was ready for paint. When it looked perfect, Extreme Metal applied the PPG Deltron graphite over silver paint with a red paint stripe.

THE CHARGER IS ONE OF THE BEST BODY STYLES OFFERED BY MOPAR IN THE ’60S, AND DEVIN MEUCCI AND DESIGNER JASON RUSHFORTH MADE THIS ONE LOOK EVEN BETTER WITH ELEGANT APPEARANCE UPGRADES. IF YOU LOOK UNDER THE REAR BUMPER, YOU WILL SEE THE CHRYSLER CROSSFIRE EXHAUST PIPES.

While the bodywork was being done, the suspension was upgraded. Laser-cut subframe connectors were fabricated and welded the full length of the floor plan. The rear springs were relocated and sunk into the frame so the Dodge could be equipped with wide rear tires. The Chrysler 8-3/4 differential was used, and it was narrowed and equipped with 3.55 gears and a Positraction differential. The original rear springs were replaced with a set from Calvert Racing, along with shocks from AQ1. Reilly Motorsports

installed an Alter-K-tion front suspension, complete with tubular A-arms, Varishock 550 spring, anti-sway bars and QA1 adjustable shock absorbers. The original steering was replaced with a Flaming River Mustange-style rack-and-pinion. The brakes are from Wilwood, 13-inch in the front and 12-inch at the rear. After the clearance was allowed for, the Dodge was equipped with I-Forced Sprint three-piece alloy wheels, with 19×10-inch wheels on the front with Michelin 275/35R19 tires, and 20×12-inch wheels on the rear,

There is no such thing as too much power, so Don Gould’s FBO Systems started out with a 440 Chrysler engine that was bored 0.060 inch and stroked to 4.15 inches, giving the engine a 500-inch displacement. Diamond 10.3:1 compression pistons running Total Seal rings fill the cylinders and hook to the crank with Manley H-beam rods. The block was outfitted with Mopar Performance aluminum heads that offer large ports and valves. A Racer Brown hydraulic cam was installed and offers a 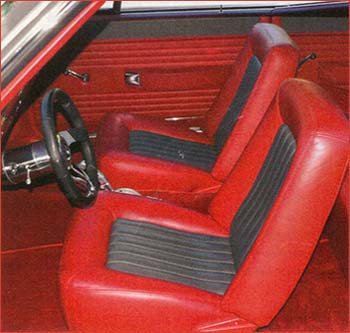 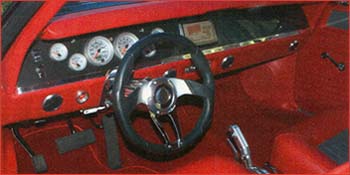 Scott Stratton of S&S Upholstery in Kenmore, Washington, stitched the elegant red-and-charcoal leather upholstery. The original seats were rebuilt and used, and they include red bolsters with charcoal rolled-and-pleated inserts, the back seats are stitched to match the front seats. 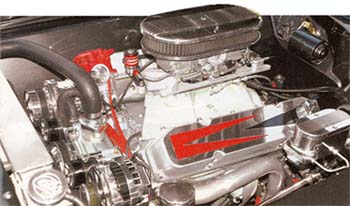 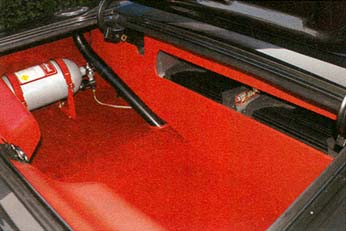 The trunk has red leather and carpet stitched to match the interior. A close look reveals the rectangular window that highlights the stereo components. When the car’s awesome power isn’t enough, a nitrous system can be turned on. The bottle sits in the trunk.

Exhaust flows through TTI headers and a Spin Tech exhaust system. The engine also features beautifully detailing, and that includes the Indy custom valve covers and a Billet Specialties oval air cleaner. The engine was run on a chassis dyno, where it registered 387 hp at 5,300 rpm and 433 lb-ft of torque at 4,500 rpm at the rear wheels.

The engine delivers the power to a ’69 727 Torqueflite transmission that was rebuilt by Pa Blais from Maryville, Washington. The transmission is equipped with a Dynamic Dual Pattern 2,600-rpm

torque converter. Gear changes are handled by a B&M Magnum Grip Street Bandit shifter, and cooling is handled by a Be Cool transmission cooler. A Gear Vendors overdrive hooks to the rear of the transmissions and effectively lowers engine speed by 1,000 rpm when activated.

Scott Stratton’s S&S Upholstery in Kenmore, Washington, worked with Meucci to design a beautiful and functional red-and-charcoal leather interior. Stratton started with the original seats and recovered them with red leather bolsters, with charcoal

rolled-and-pleated inserts in both the front and rear. The dash was custom fabricated and features Auto Meter Ultra-Lite gauges and an AVIC-Z1 navigation system, along with Fusion Audio components. A Flaming River Cascades steering wheel points the Charger in the correct direction. The trunk area was upgraded with red leather and carpet and houses the stereo system as well as the nitrous bottle.

When Devin and the team were finished, the Charger was a far cry from the Duke Boys’ car, but we know they would appreciate how nice this one turned

out. The Charger provides plenty of power for acceleration, and the upgraded suspension provides much-improved handling. When the Charger was finished, it was invited to be displayed in the Chrysler booth at the SEMA Show, but Meucci told us he wanted to test the Charger’s acceleration, and that the results were impressive. To do this, the Charger was driven to Bremerton Raceway, where it turned the quarter in 11.991 seconds at 113.67mph without the nitrous. Indeed, the Dukes would have approved. SR

AS KIDS, DEVIN MEUCCI AND HIS BROTHER BRENDON WERE HOOKED ON THE TV SHOW “THE DUKES OF HAZZARD” AND FELL IN LOVE WITH DODGE CHARGERS. BRENDON WAS THE FIRST TO BUY ONE, AND A FEW YEARS LATER DEVIN BOUGHT A NICE CHARGER THAT HE DROVE TO HIGH SCHOOL IN HIS SENIOR YEAR AND LATER TO COLLEGE.

When Devin started working in Seattle, he had an apartment and one morning he went into the parking garage and his Charger was gone. Devin thought the Charger was gone for good, but four weeks later, the Dodge was used in a car chase with the Washington State Patrol. It turned out that the Charger was used as a getaway car that was linked to several local burglaries. When Devin got the car back, it was full of dents, the engine was ruined and the interior was in bad shape. Since he loved the Charger, he decided to get it back into shape, and that was the start of this fantastic transformation.

1. Devin Meucci contacted Jason Rushforth to design a plan of action that Chris Odom and his build team could follow. Several designs were made, but the first one was the best one, and it was closely followed in the build up. 2. Here is the charger in the impound lot after the criminals who took it were apprehended. Devin picked up the car and delivered it to Chris Odom’s Extreme Metal and Paint in Anacortes, Washington. 3. Both the rear quarter panels were dented to the point that the folks at Extreme Metal decided to install new ones. The Dodge was disassembled and the metalwork was done on the doors and fenders. 4. Looking at the rear quarters, you can see how the new wheel wells were attached to the existing ones to make more room for the wide wheels and tires. 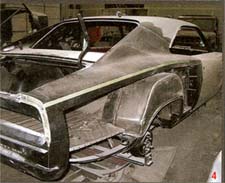 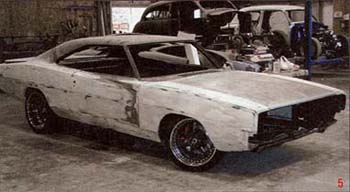 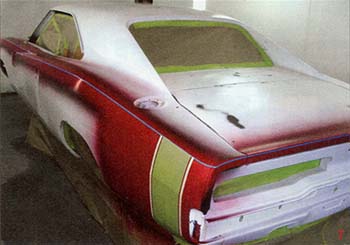 5. The new quarters were attached, the doors were installed and the front fenders were bolted back on so the finish bodywork could be done. Plenty of primer and block sanding were required to get the Dodge ready for paint. 6. The firewall was smoothed so that it would be an attractive home for the engine. A front spoiler also was designed and fabricated to improve the appearance of the front end. 7. The Charger was sprayed with red paint in the area where the stripes will be masked. After the paint was in place, the body was back-masked in preparation for the silver and charcoal paint. 8. Here is the Charger after the silver and charcoal paint was applied. After all the color coats were applied, the entire body was clearcoated. 9. Here is the Charger after the paint has been applied. At this point the fenders were removed so the engine compartment could be painted and detailed, as seen here. 10. The engine was installed in the engine compartment, and you can see it’s a tight fit. The original 383 was replaced by a healthy 500ci 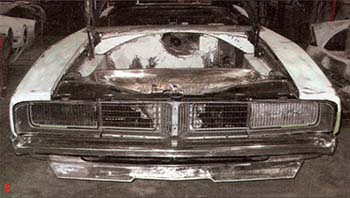 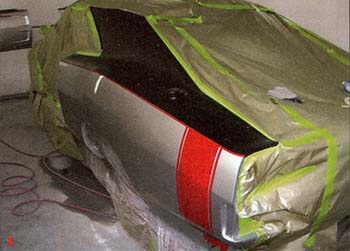 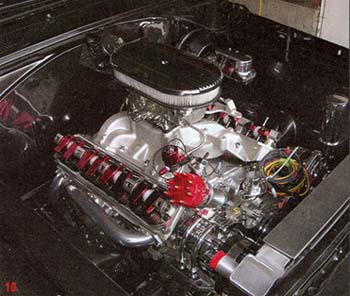 engine topped with Mopar Performance aluminum heads and intake manifold. 11. Meucci didn’t build this car just to look at itâ€”he built it to give him enjoyment behind the wheel. Here he is at Bremerton Racewa, where the Charger blazed through the quarter in 11.991 seconds with a 113.67-mph top speed. The car would be even faster if he turned the nitrous on.