ost custom truck enthusiasts these days build their trucks with a specific purpose in mind. Some complete their pickups to show off on the competitive show arena, while others construct their trucks to promote their personal business or to blaze down a quarter-mile dragstrip. People have all sorts of motives for enduring the long process of building something that stands out in a sea of stock production vehicles roaming the streets and shopping mall parking lots of California. There is nothing better than firing up a radical big-block and hearing the cam lope, the exhaust roar, and the feeling of power explode underneath your right foot when the tachometer needle climbs to the red line. This sounds like a race car driver’s daily round of practice laps, but for David Addison of Corona, California, this is the feeling he experiences every time he cranks over the ignition on his ’92 Chevy Extended Cab dualie. Similar to most enthusiasts, David had a specific purpose

in mind when he purchased the dualie. As a member of the Over the Hill Gang of San Berdoo, a popular car club for street rods and customs, and as the owner of few pristine street rods, Dave needed something cool to drive on a daily basis. He only had three requirements that the finished product had to fulfill: It had to be low, smooth, and powerful in order to get Dave quickly around twon and to
pull his hot rod and trailer to various custom car shows. The result is a tire-shredding tow vehicle that turns heads wherever Dave takes it and receives numerous thumbs up from the younger generation
cruising body-dropped and ‘bagged rides. Dave gives them thumbs up right back, as a man who appreciates the craftsmanship and work that goes into anything custom, and then hammers the throttle down and
passes them up with trailer in tow. The foundation of Addison’s sensational Chevy began with taking the ride height down to a much more cool custom level.

To fulfill Dave’s first requirements of getting the dualie low, he turned to Belltech for front and rear suspension drop components. The front took a 5-inch nosedive toward the asphalt using 2-inch Belltech dropped spindles combined with 3-inch Belltech dropped springs. Slamming the rear a full 7 inches was made possible by a Belltech flip kit, a custom C-section, and rear airbags installed by Empire Motorsports of Rancho Cucamonga, California. Blistein shock absorbers soak up the bumps and aid with tride quality when Dave is towing of just plain cruising. Chrome KMC dualie wheels in classic 16-inch diameter accent the dualie’s aggressive and slammed street stance, while Toyo rubber creates the smoke and lays the patach when the throttle pedal is pinned. Speaker of power, Dave took extra care to ensure that Jagged Edge could hold its own from stoplight to stoplight and on steep grades with his precious cargo (street rod) behind it. 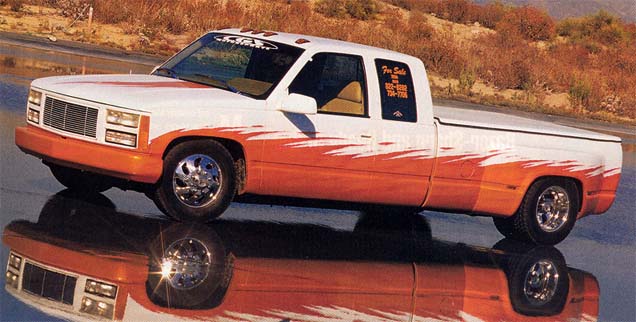 The back end of Jagged Edge is given the street rod treatment, incorporating shaved taillights, a ZR-1 roll pan, and a shaved tailgate handle. The Hot Tangerine graphics wrap around the back end to bring additional definition to the body modifications.

In-your-face Jagged Edge conveys an aggressive attitude while its 510 hp is begging to be unleashed. A billet grille insert and the unique use of pearl White and Hot Tangerine colors bring in an element of innocence as the beastly big-block lurks underneath the hood, waiting to be pushed to the limit.

Anyone who has ever driven one knows that a big-block-equipped Chevrolet dualie pickup truck is no slouch in the power department. These gas-guzzling beasts have an enormous amount of torque and power, making them prime targets for towing duties. Rather than leave well enough alone, Dave saw the already stout powerplant in Jagged Edge as a building block for serious horsepower. Once the engine was hoisted from the motor mounts, it was delivered to Randy Richie at Performance Associates in San Dimas, California, for machining. The compression was set at 10.2:1, and the crank was balanced and blueprinted for smoother operation. Rumbling sounds come from Competition Cams roller camshaft complemented by Chevy high-performance aluminum heads, which were ported and polished for better flow characteristics. The stock throttle-body fuel injection was retired from service and replaced with an Arizona Speed and marine Tuned-Port Injection system to give the big-block quick liquid refreshment. A set of HPC coated Hooker headers allows the 510hp beast to breathe easily, while a CGS Motorsports catalytic converter and CGS aftercat exhaust system finish off the engine’s power cycle. CGS just finished development on this new catalytic converter, and Dave’s dualie was the lucky test mule. Custom engine pulleys by Zoops, a Derale oil cooler and cooling fan, and an oversized radiator from U.s. Radiator increase the engine’s operating efficiency and temperature control. A Gear Vendors Overdrive gear-splitting unit adds a Fifth gear to the factory 4L80E overdrive transmission, allowing Dave to keep the fire breathing big-block’s rpm in check. Now that Jagged Edge had the chassis

and the engine modifications to bully stock trucks around on the street, it needed some smooth body modifications and an intense paint scheme to be able to look cool going down the highway.
Body modifications and paintwork are perhaps the trickiest part of building a customized truck. Capturing the right look without going overboard can drive truck fanatics crazy until they come up with a look that lights their eyes every time they see it. As a street rodder at heart, Dave likes all things shaved and smoothed, so it comes as no surprise that the dualie features more than a few clean body modifications underneath its pearl white paint. The truck was first delivered to Bad Boyz in Bakersfield, California, to go under the razor. First, the front end was fit with a GMC grille shell and stuffed with a billet insert for added flash. The back en was smoothed and sanitized by shaving the factory taillights and the tailgate handle and installing a molded-in roll pan with ZR-1 Corvette taillights. With the body modifications smoothed of their rough edges, Kevin Robbins of Bad Boyz mixed up some PPG pearl white and proceeded to lay the rich base color over the dualie’s wrinkle-free finish. Melting your eyeballs at first sight are Hot Tangerine Jagged-Edge graphics splashed down the sides and wrapped around the tailgate region. Teaming these two colors together with a wild graphic scheme creates a bold and stylish look that lets Dave tow his hot rod in style.
Inside the slammed and power-packed Jagged Edge cruiser lies an interior that features more comfort and style than that of the world’s most exotic luxury cars. Knowing he would be spending a lot of time on the open road in this tire-blistering road warrior, Dave chose to. 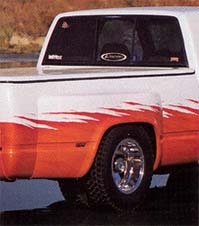 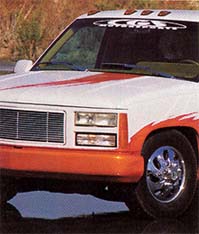 Striking a pose for the camera, Dave’s dualie flexes its performance and styling muscles. Hot Tangerine graphics laid over the pearl White basecoat catch your eyes and draw you in to get a closer look at the incredible detail this Chevy features. 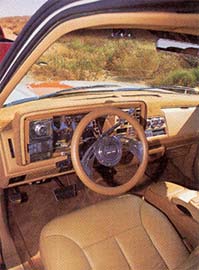 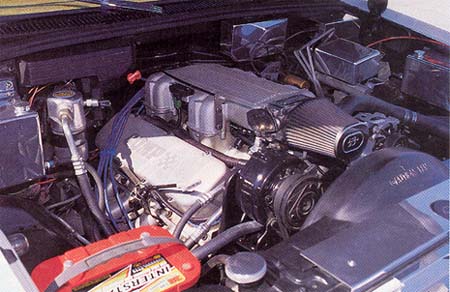 invest a lot of thought into upgrading the factory threads. The truck was delivered to Ron Mangus at Custom Auto Upholstery in Bloomington, California, to receive tan leather material sewn over the power captain seats and the dash. Tan wool carpeting was used to give definition to the floorboards, while a wool headliner was crafted to lend a dose of custom to the cab’s ceiling. A custom overhead console was built to mount up in the headliner, while billet aluminum trim pieces from Empire Motorsports are dispersed throughout the cab for an extra dose of detail. When the gas pedal was hammered to the floorboards, Dave gripped his fingers around an Empire Motorsports billet steering wheel with tan leather wrap to keep his Jagged Edge hauler pointed in the right direction.
Dave has logged many miles on Jagged Edge since it was completed in August of last year. How can he resist

Underneath the factory hood lies a much more potent big-block than Chevy ever intended on installing. The mill is a performance masterpiece fit with all the best performance goodies from CompetitionCams, Hooker Headers, and Arizona Speed and Marine.

with a roaring big-block under the hood and trick paint adorning the massaged exterior metal? There is nothing quite like listening to a high-performance engine while flying down the freeway with the tunes cranked and the air conditioning blowing in your face. We bet Dave has to keep Jagged Edge locked up tight in the garage so his two boys do no try to snag the keys and go cruising. Jagged Edge is a truck that can do it all by being able to tow, perform, and look cool; it is definitely a custom truck act all enthusiasts should try to follow. TR 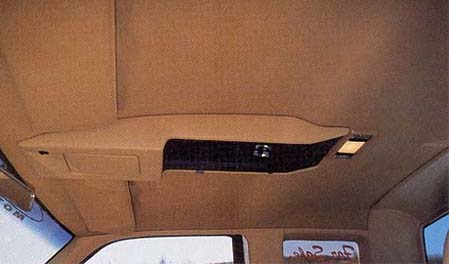