Oldsmobiles have historically conjured up images of family outings, cavernous grocery-swallowing trunks, comfortable seat, smooth rides, and reliable transportation-Dad’s car. In 1964 Olds moved to snuff this conservative stigma with the introduction of the 442, a bold declaration denoting the new model’s standard four-speed transmission, four-barrel carburetor, and dual exhaust. It was

James Kryta didn’t realize the significance of the W-30 option package when he purchased his 442 back in 1987. The Cutlass survived his senior year of high school and holds some very fond memories.

an in-your-face statement for those doubting the attributes of this new model A-body. A legend was born.
In 1987, 17-year-old James Kryta was starting his last year of high school and searching for a GM A-body. He was hunting for a ’70 Chevelle with a 454, when he happened upon this rare ’71 442 for $2,400 and drove it home. He didn’t realize what he had right away, but he was sold on the idea of a 455 sitting between the framerails. Later he learned it was a rare W-30 model, which in 1971 meant a 455ci engine, four-barrel carburetor, aluminum intake manifold, fiberglass ram-air hood and air-cleaner assembly, and a slew of other performance options. The Olds had seen better days, but it provided James with a senior year he’ll never forget, filled with cruising, mayhem, more cruising, and in his own words. “Not nearly enough gas money.” The poor 442 was relentlessly trashed and ended up sitting at his dad’s house in Buffalo New York while James pursued a career as an aircraft mechanic.
James later wound up in Detroit and

started his own business. Inline Tube, with his brother John in 1996. In 1997, he shipped the car to Detroit and started a painstaking restification, often using his A-body as a template for parts produced by Inline Tube. The project took on a life of its own, and James ended up replacing or refurbishing virtually every nut and bolt on the car. What he has succeeded in creating is a modern 442-a muscle car that not only hauls ass in a straight line, but also handles turns without wallowing and stop without heroics. The ultimate gentleman’s hot rod got a makeover.
James Kryta’s W-30 Olds is poised to thrive in the new millennium and to show future car crafters what modernized musclecars are all about.

Car Craft: Your 442 look like a 100-point restoration sprinkled with serious performance parts. In particular, you’ve paid quite a bit of attention to the suspension. What led you to create a 3,700-pound musclecar that handles well?
James Kryta: James Kryta: A number of years back I read in a magazine about how to make a GM A-body handle like a Trans Am. Then, a friend purchased an ’89 TA and I was impressed with the way it took corners. I basically looked at a modern performance car and compared it to my

classic musclecar. I figured out what the new car had that mine didn’t and set out to make a modern performance car out of the 442 while maintaining the classic styling. Everything had to function like the car came off the assembly line.
CC: How is your car received at shows?
JK: Funny that you ask. The tendency of the show folks is to place it in the stock/restored class-until they start to scrutinize the car more closely. I’ve gone out of my way to make the aftermarket parts look like stock pieces. I even stamped the Edelbrock aluminum head with factory casting numbers.

CC: What does the future hold?
JK: I’m through showing it. I didn’t build it to show, but it turned out so nicely that we just had to. In fact, it’s never done worse than Second Place and we’ve won Best of Show on four occasions. Ultimately, though, I want to fine-tune it, maybe add nitrous oxide, and then drive the hell out of it. I wan to get the car to the point that the performance is maximized, and the only way to accomplish that is to run it at the track. You can’t sort the bugs out on the street. Then, I just want to drive it. 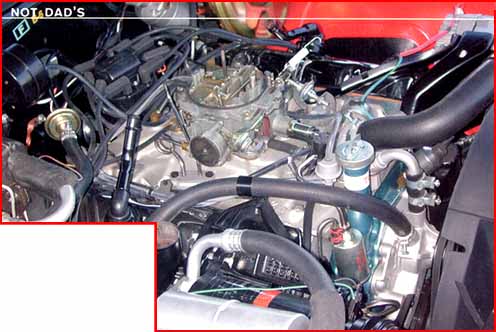 Motivation is provided by the original 455ci powerplant, punched 0.030-over and fortified with a big Isky hydraulic cam, TRW slugs, Edelbrock aluminum heads, and Harland Sharp 1.6 roller rockers, all deceptively hidden beneath stock valve covers, a stock W-30 aluminum intake with a Quadrajet, and stock cast-iron exhaust manifolds. It may look stock, but when James cranks the ignition the jig is up. 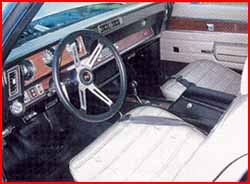 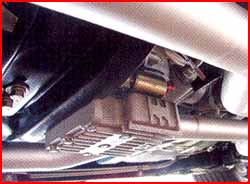 Modern musclecars feature overdrive. James’ Olds is no exception and packs a Gear Vendors unit to back up the Turbo 400 trans. Attention to detail is mind-boggling.