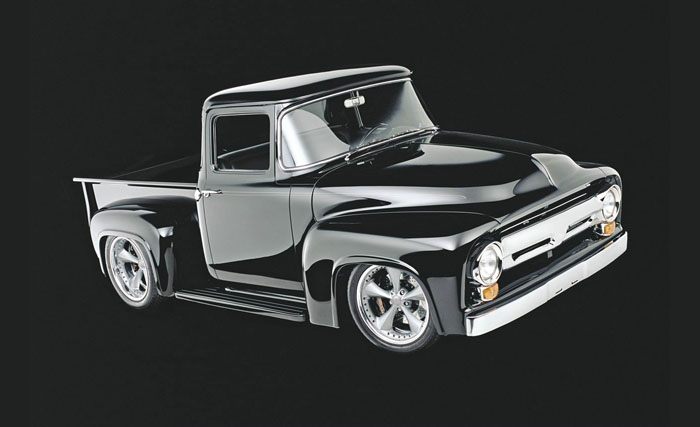 Chip Foose’s favorite personal truck was “Overhauled” by his dad, knowing it wouldn’t otherwise get completed.

While Sam Foose was busy building the cutting edge street rods of the sixties his “toe-head” of a son, with lots of creativity, stayed underfoot begging for the opportunity to be a part of his dad’s shop. Few rewards mean more than having your son participate in the same activity you love, and Sam’s has been fashioning cars and trucks all his life.

Hard as it is to imagine, Chip Foose took advantage of the opportunity to run his hands over the body lines of hot rod milestones; cars that were immortalized by Mattel and AMT as models for young and old dreamers alike to enjoy.

Of all those famous vehicles, there was only one in Chip Foose’s crosshairs. Only one that he desired to jump behind the wheel and have his dad pass on to him, as Chip will to his son Brock sometime in his future. No, it’s not a ’32 Highboy, a Masarati or vintage Corvette. It’s a truck. This very truck, a 1956 Ford F-100.

It may be one of 127,000 made by Ford in 1956, but to Chip, it is the only truck he ever wanted. It’s a vehicle which he will never surrender to the horde of enthusiasts who clamor at the chance to own this piece of Americana. This truck is too special to Foose to ever let it go. No matter how much a rich man may offer him, hes not going to sell it__-Never!

But before we get into the truck that Chip loves like a family member, we have to get into the way it began to make a new transformation.

We have all experienced seeing Chip Foose as the celebrity that guides a team of top automotive/truck talent, who literally transforms rust buckets into rolling treasures in seven working days. Let alone going through the process of documenting the experience weekly on the TV show, Overhaulin’. 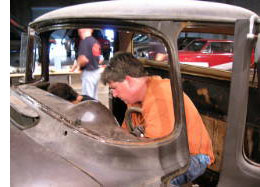 We’ve all seen him sketch cars freehand, that turn into works of art, both on paper and on the vehicle itself. We’ve seen him attack a challenge during the rebuild of a vehicle where he isn’t afraid to pick up a large hammer, block of wood and massage a resisting body line. This is pure admiration for a 42 year old man who seemingly can tackle any task laid before him.

But there is a modest side to Chip that makes him special. Chip and his Overhaulin’ crew can “make new” a car or truck in seven working days because he saw the men in his dad’s shop pull off the same, unreal tasks decades ago. Chip shares the passion that these men, (primarily his dad Sam) to literally live in the shop until the car was as close to perfect as time and the budget permitted. 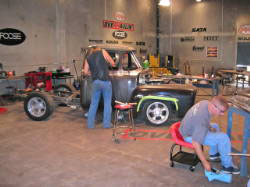 Now think of a blonde haired boy, age 12, who was glued to his dad’s leg to the point that he often slept in the watch dog’s house, and shared a flea or two with him as well. Even then, Chip saw how much his dad loved the body lines of an F-100 pickup truck. This anomaly of Detroit design rubbed off on Chip too. He bugged Sam for the chance to challenge the monster’s grouping of pedals, levers and a steering system that was difficult, even to someone with Popeye forearms.

His Dad finally succumbed to Chip’s constant pleas, allowing his son to sit on his lap while maneuvering it about the shop’s parking lot. Chip fought the massive steering wheel, became confused with the pedal operation and gave it the gas instead of the brake as they approached two valuable cars. That day ended with a bang, and three bent vehicles! Chip has made the Jaguar’s Grille a part of his Peterson Museum display, along with the very truck he crumpled on that fateful day. 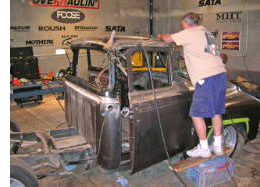 So, this is one of the reasons why Chip Foose never let that F-100 truck go. It was his personal transportation for years until it could no longer keep up with his daily demands for a comfortable and utilitarian vehicle. As Chip’s career flourished, the ’56 was moved, along with his desk sketch pads and machinery, always with a plan to reward it with a powerful engine and body fit-and-finish that it deserved.

As a matter of fact, Chip had gone so far as to perform sketches of the modifications that would not only make it functional, but give it the styling it should have had when it left the Ford factory in 1956! Furthermore, the reason the restyling is so hard to spot is because the new lines of his truck are rather subtle. The two major Points to the truck’s restyling are a Wedge cut on the hood which creates a subtle rake to the nose. 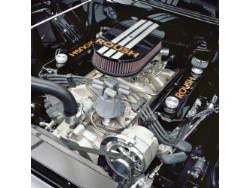 Dyed in the wool Ford F-100 enthusiasts constantly study the redesign of the cab lines because they are now perfect. The 1953 thru ’55 have a laid back cab design, and it was carried over to the ’56, even with the addition of a wrap-around windshield. Not as dramatic, but it is there.

In Chip’s sketches, he came up with the idea of rotating the cab to align the roof line to become parallel with the running boards. This was achieved not by chopping the top, but by cutting down the cowl area below the front windshield! Check it out in the broadside view and you will now see all parallel lines; bed, running boards, roof lines, window openings. The door handles, wipers and gas filler are all intact, items he would never remove because of their contribution to the truck’s Original style. However, bumpers dangling precariously out into space, front and back, had to be trucked dead zero clearance to the body. And wheel wells designed to accept huge diameter work Tires have been massaged to showcase Foose Design wheels, just as in the Chip Foose sketches that his dad Sam snatched to guide them through the build of this very personalized F-100. 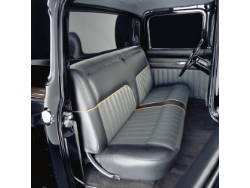 In true Overhaulin’ fashion, the truck was hijacked five months before this past year’s SEMA show, with the clock ticking to make its debut’ this past November. Amazingly, the legendary Jack Roush not only opted to deliver #001 of his latest big block Ford engine projects for use in Chip’s truck, but to have it unveiled to Chip in his booth at SEMA!

Months before that debut, the A-Team of the Overhaulin’ series, busied themselves revitalizing cars and trucks on a weekly basis, then dropped in to perform modifications to Chip’s F-100 in their spare time! The truck was reduced to a bare chassis before an Art Morrison front cross member and independent suspension were added. Quickly the 451 cubic inch Roush V-8 was mated to the dropped 9-inch Ford rear end. Huge Baer brakes were added for stopping power before Foose MHT billet Wheels made the chassis roll. 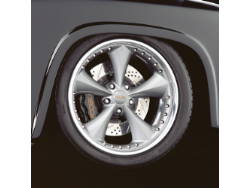 However, the big challenge was to take Chip’s visions of the planned restyling of this F-100 and make them a reality. Both the hood and cab had to be cut and fit back together with a pro’s touch, with Sam ensuring that all of the modifications were exacting. For every action there is a reaction, which meant the door frames had to be modified to fit the lowering of the truck’s cowl, which was done to tilt the front of the cab down. Chip refers to this modification as a “rotation.” As for the hood, Foose’s sketch called for a Wedge cut. Sounds simple, but the lines of this part are more complicated than they seem, but the A-Team pulled this mod off flawlessly. 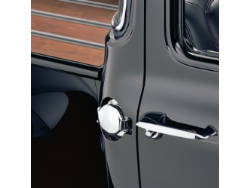 Ironically, Chip’s foot notes in his drawings called for the lower portion of the firewall to be extended four inches into the engine compartment to create more leg room. As Chip said, “It was discussed, but they opted not to modify the firewall. Those trucks are small and the additional leg room would make a world of difference.” The same held true for a custom drip rail design that Chip had planned. “Like a ’34 Ford’s drip rail.” Foose describes this truck as being gorgeous, but there is a grin to his comment as he added, “There’s a perfect ’56 big window cab in storage that will get those modifications __ someday in the future.” This truck is destined to stay in the Foose family as his son Brock will be given the keys â€“ but not when he is 12. Not with a 455 horse Roush big block purring under the hood! Chip Foose grins with pride when he exclaims, “Iâ€™ve been overhauled.” 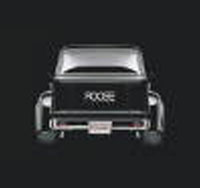 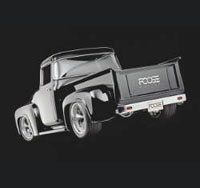 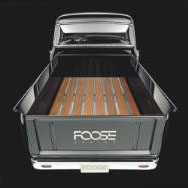