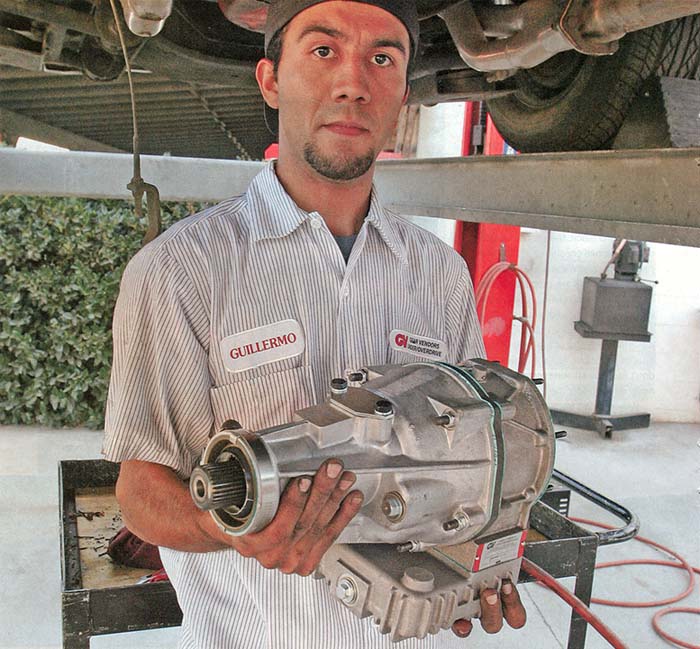 ny time one runs across a custom classic truck that has been in the hands of the same owner for many years, it is always interesting to note the changes both the owner and the truck have undergone. It seems the more radical the truck was built in the beginning, the less the owner tends to enjoy it as he ages, and almost without exception the truck is driven less.

Such was the case for Jerry Sievers of Placentia, California, and the ’64 Chevy short bed Stepside pickup he has owned for the last 30 years, Complementing the ’64 classic hot rod looks, the drivetrain in Jerry’s pickup is a 327 with three deuces backed by an M-21 Muncie four-speed hooked to a set of deep 410:1 gears. As we all know, deep

gears are a lot of fun when it’s time to leave someone sitting at the stoplight, but the fun starts to wear off as soon as one hits fourth gear and the engine is still screaming like a banshee. In addition to the wear and tear on both the engine’s internal components and the driver’s nerves, an engine sustained at higher rpm burns a lot more gasoline and ultimately wears out faster.

Jerry considered dumping his four gear Muncie in favor of a late-model five-speed, but in addition to losing a major part of his ’64 nostalgic appeal, he was concerned installing a five-speed with its wider rations would hurt his truck’s performance. A standard five-speed would drop the rpm by 40 percent on a first to second gear shift, which means when winding first to 4,000 rpm and then shifting to second, the tach would 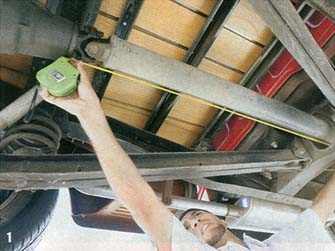 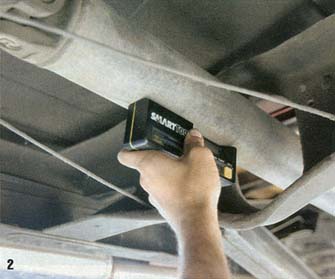 Next, he checked the existing pinion angle with an indicator. After collecting the data, he wrote it down on a worksheet. 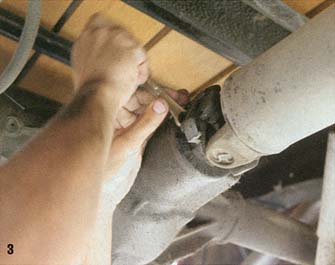 Before removing the four bolts to take the M-21 Muncie from the bellhousing, he unbolted the driveshaft. 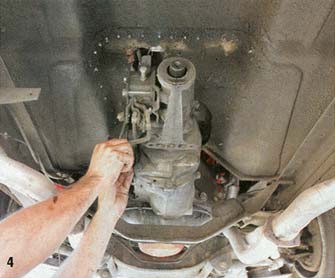 Before pulling the M-21 Muncie, he had to disconnect the emergency brake cables and shift linkage and remove the crossmember. 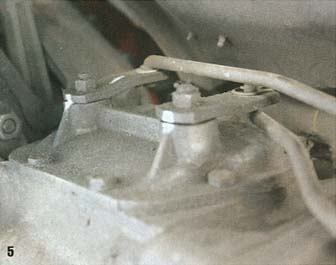 He used Whiteout to paint alignment marks on everything that needed to be reassembled exactly as it had been prior to disassembly. 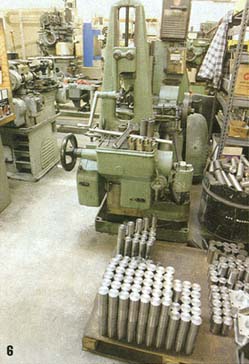 While Guillermo finished removing the transmission, Rick Johnson gave us a tour of Gear Vendors’ manufacturing plant. It is interesting to note the building was at one time the home of Buck Knives. 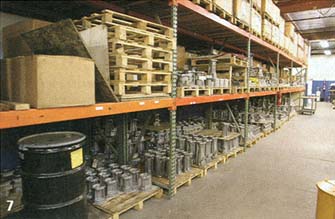 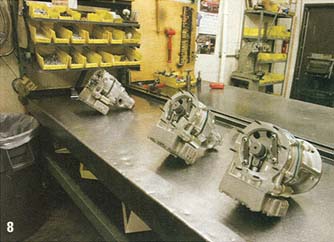 Here are three Gear Vendors Under/Overdrive units with optional deep-sump pans thoroughly tested and ready to be packed for shipping to anywhere in the world. Deep sumps are used for large truck applications. 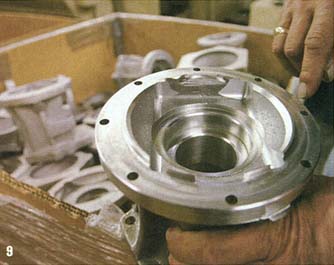 Thanks to Gear Vendors machining components in-house and tight quality control, parts like this only require a thin gasket without any sealants. 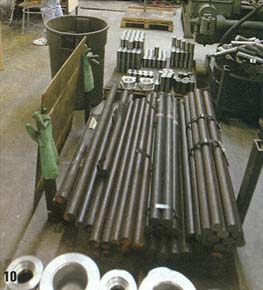 These lengths of special steel round stock will be cut to size and then have splines cut in. 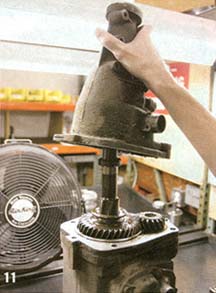 After the transmission was removed from the truck, the next step was to remove the stock M-21 Muncie’s tailshaft.

Prior to installing the Gear Vendors Under/Overdrive unit in Jerry’s ’64, he was aware of the benefits he would reap with a taller top gear as far as engine noise and gas mileage, but it was being able to select closer-ratio gears that really blew his mind.

Listening to Jerry’s ’64 Chevy as he sped away, the truck sounded like a dragster blasting through the gears at the dragstrip. This was due to the ultra-close gear ratios created by the Gear Vendors Under/Overdrive splitting the 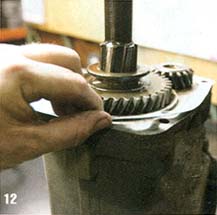 With the stock tailshaft removed, Guillermo prepped the Muncie’s case by scraping off the old gasket and installing the new gasket dry.

M-21 Muncie’s stock ratios, plus its ability to withstand full-throttle power shifts. For example, the Muncie’s 2.20 first-gear becomes 1.71 with the Gear Vendors unit engaged, in comparison to shifting to the close-ratio Muncie second-gear ratio of 1.64 (which, thanks to Gear Vendors, no longer seems as close as it once was). For the next shift, since second-gear overdrive and third-gear direct both have a 1.28 ratio, the hot setup is to manually shift into third gear direct and 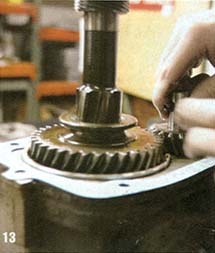 Next, he returned the reverse idler gear and shaft onto the Muncie transmission case.

then punch the Gear Vendors button for a clutchless shift to third overdrive, which is 1.00, the same as the Muncie’s fourth-gear. And now, of course, since we are back into fourth-gear, where the final drive on Jerry’s ’64 is 4.10 his little 327 is turning some major rpm at highway speeds. This is where the Gear Vendors unit, with its 28.6 percent faster overdrive cruising, really comes into play. The 4.10.1 differential in Jerry’s ’64 in essence becomes a rearend packing 3.20:1 gears. 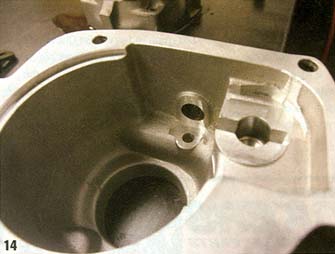 The trickiest part of the entire job is installing the Muncie reverse shifter fork into the Gear Vendors adapter housing. Here is a view of the empty housing. 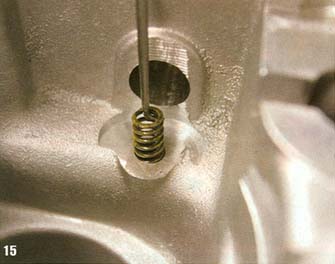 With the adapter housing held in position facing upward, the next step was to place the detent spring into the housing. 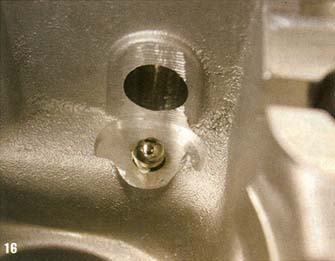 Guillermo applied white lithium grease to the detent ball, then placed the ball on top of the spring. 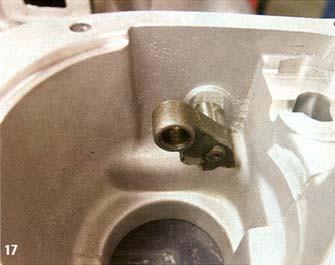 He also applied with lithium grease to the shifter shaft, which he pushed outward until it almost contacted the detent ball. 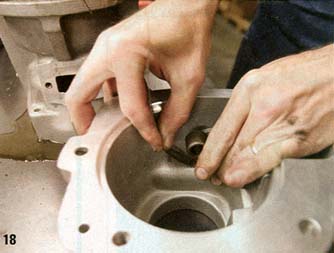 The trick to compressing the detent ball is to fully open up a stainless steel hose clamp and use the opened clamp as a tool to slide under the shaft and compress the detent ball. 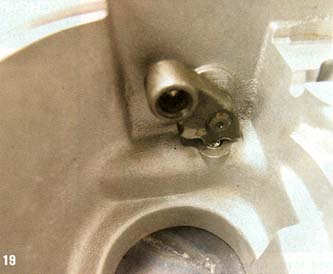 Here is how the detent ball appeared after it was properly installed. 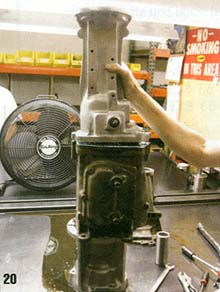 To install the adapter housing onto the transmission case, push the lever to engage the shift fork with the reverse gear shift collar. He pressed the pilot idler shaft by hand and installed the lock pin. 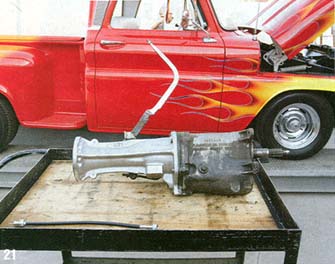 Here is how the adapter housing appeared on the Muncie with the linkage after the attaching bolts were torqued down to spec. 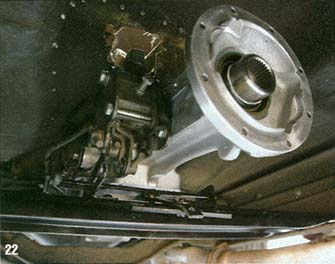 With the same fluid as the Gear Vendors OD, the coupler was pressed in and shimmed to mate flush with the adapter housing’s surface. 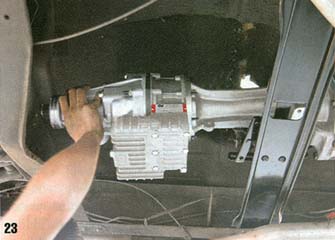 He installed the Gear Vendors Under/Overdrive unit onto the Muncie and adapter after they were installed into the truck. Notice the stock ’64 Chevy emergency brake linkage was retained without interference from the unit. 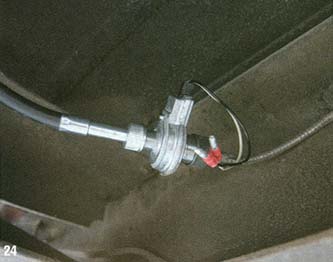 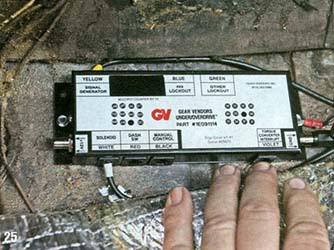 The Gear Vendors computerized control box was mounted under the carpeting on the driver’s side, only needing a few wires to hook it up.

The Gear Vendors control box was engineered in-house and is manufactured on the premises. It has enough built-in optional functions that one part number covers all Gear Vendors’ applications. 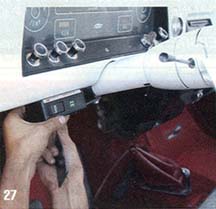 Instead of using this box, Guillermo ended up concealing the red and green pilot lights in the tachometer. The Gear Vendors overdrive switch is located in the Hurst shift knob available through Gear Vendors.

With the shortened driveshaft installed, Jerry’s ’64 was all set to enjoy a 23 percent increase in gas mileage and a lot more miles with less noise in the cabâ€¦.and oh yeah, it’s a lot faster now!

Installing the Gear Vendors Under/Overdrive unit onto the M-21 Muncie is pretty straightforward and doesn’t require any special skills. Since there are only four bolts that hold a Muncie in place, it was easiest to remove it and install the Gear Vendors unit on the workbench.

Thanks to keeping the 327 within its power curve, the ’64 accelerated faster and was more tractable on the freeway, switching out of overdrive to function as a passing gear, then back to overdrive for better gas mileage. CCT