A Clean and Classy Hue; What More Does the Chiseled
Good Look of the Original Musclecar Need?

t’s called The Great One. What’s so great about it? Well, there’s a rather small consortium that would like to provide a history lesson and have you know that it was this very car, or at least one similarly optioned, that truly launched that musclecar era. Because it’s a stick-shifted ’65 Tri-power GTO? Not exactly. More precisely it’s because it’s a ’65 GTO with a 376hp, 421ci big-block borrowed from a Catalina—just like the one in the controversial 1063 Car and Driver cover story featuring a watercolor by artist Tom Quinn depicting the new Pontiac 250 GTO being run against its namesake, the Ferrari GTO, on a road course. But

don’t take our word for that, Pontiac PR guru Jim Wagner finally fessed up that the ringer was put together at Royal Pontiac before the test. Of course, the actual head-to-head comparison didn’t happened until 20 years later in the ’84 issue with a real 389ci car.
What also caught our eye about Performance West Group’s (www.performancewestgroup.com) GTO tribute car is that it exemplifies a recent trend in aesthetics we wholly support. Namely, the striking presence of the car relies solely upon a flawlessly straight stock body bathed in a solid color that somewhat recalls a factory hue—but like a good memory, it’s just a little better. When a car has great lines, that’s all you

need. The custom-mixed Sherwin-Williams paint from the Planet Color line, appropriately dubbed Hurst Gold, uses special pigments and candy dyes to create a unique effect, and it does it in only a simple basecoat/clear two-stage, which means you don’t have to be Junior Conway to pull it off. Best of all, this custom color is available from your local Sherwin-Williams Automotive Finishes store, using the company’s Formula Express System. The formula is stored in its Formula Express database. Things are definitely changing for the better in the paint world. Read on as we take you through what we see as some of the next great trends in paint. 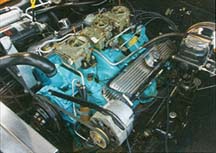 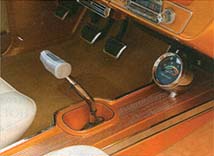 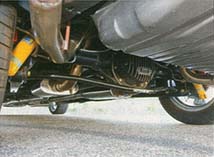 CLOCKWISE > There it is—legendary faker. The 421ci WJ code Poncho was built to near stock specs by Van Gordon Racing and puts out 400 hp at 5,500 rpm. > The interior looks right, but better as well. Katzkin leather was sewn to the original pattern. A healthy amount of reproduction interior parts were provided by Year One. > Details like the careful color-matching on the console and restored manifold vacuum gauge [thought it was a tach didn’t you?] really separate this car from a basic resto. Pontiac never made them this nice. At the other end of that T-handled Hurst shifter is a Muncie M20 four-speed with a Gear Vendors Overdrive.
> Underneath, a full Hotchkis Performance suspension and Bilstein shocks paired with 18-inch Oasis wheels and Toyo rubber mounted on 14-inch Stainless Steel Brakes discs ensure this GTO likely could hang with a Ferrari 250 GTO on a road course. 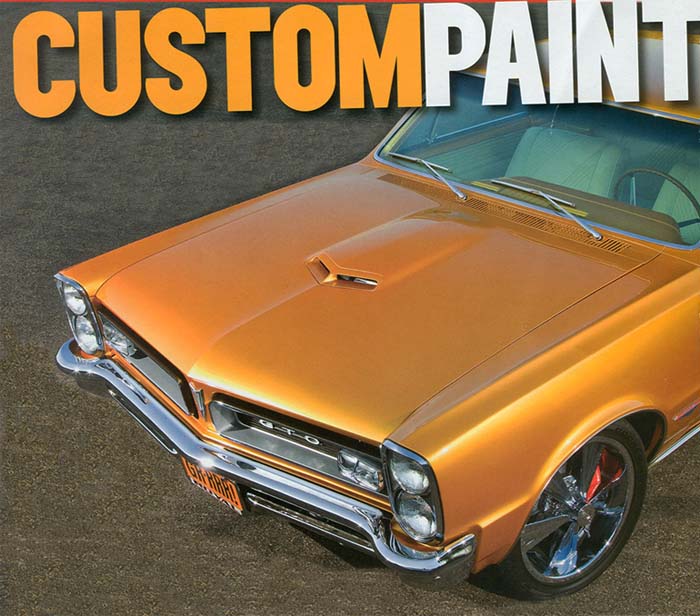