IT BEGAN WHEN HIS FATHER SAID NO

ich Boyd knows how a rod should look-stance, wheel and tire combo, angles, use of color, understated presentation, and timelessness. That’s because Boyd is a trained automotive designer who graduated with honors from Art Center College of Design (Pasadena, California) in 1976 before moving on to Chrysler Corporation and back to sunny So Cal to join Larry Wood at Mattel toys. He is also an automotive artist, writer, and photographer who currently occupies the prestigious technical chair at Rod & Custom magazine. Best of all, he’s just finished a 10-year project on a ’33 roadsterâ€¦thanks to his nay-saying father.
As a car-nut kid growing up in Tucson, Arizona, Boyd lusted over a chopped, primered, flathead-powered ’33 five-window coupe. “It was the car of my dreams,” recalled Boyd, “but my dad said no. And the visions of that suede runner remained my ‘some day’ dream until I acquired something better-my own ’33 roadster.”
Hot rods come together in many ways; it all depends on the creator’s time, money, and energy. Boyd had plenty of time and energy-to raise a family and finish a scratch-built roadster at once. It was a lack

of green that delayed completion. So Boyd did it the old-fashioned way. He did most of the work himself, piece-by-piece, covering each step in a series of how-it’s-done articles.
Technically, Boyd’s ’33 “Road-Star” (his name, not mine) is a repop ragtop. It mirrors street rodding’s growing sophistication and the availability of reproduction components and specialty assemblies. Road-Star is amalgamation of new aftermarket parts-from a Brizio-modified Just-A-Hobby frame fitted with Heidt’s and Deuce Factory suspenders to its Wescott body and Rootlieb hood. The most difficult problem facing the hot rodder is making all these unrelated but Ford-based parts into a cohesive form-but that’s another story.
Another thing, experienced during Road-Star’s 10-year gestation was a change in tastes. In 1989, when the process began, Boyd’s desire was to build a Coddington-style smoothie. By 1999-the car was finished in time to participate in the 50th Grand National Roadster Show-Boyd’s ’33 had adopted a traditional ’60s look. The DuVall V-style windshield was discarded. The seats were changed. Billet wheels became American Torque Thrust IIs. 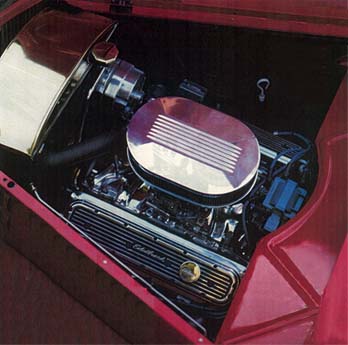 Below: a subtle front-to-rear rake (stance) is an essential of modern street rod aesthetics. Do the wheels and tires fill the wheel opening? Is there an improper mix of metaphors-that is, the combining of two unrelated looks? Rich Boyd’s ’33 roadster wins on all three.

New instruments were selected. And Scott Guildner louvered the side panels in an attempt to make its appearance, in Boyd’s words, “a more conventional, yet smooth looks with a few unique details.” These unique details include modified ’33 windshield posts rather than billet aluminum units. The stock front bumpers help hide the car’s IFS.
The automotive designer in Boyd opined, “This simple roadster has only a few external modifications, but doe shave a curved windshield because I’ve never seen a ’33 or ’34 with a windshield like it. If Edsel Ford’s glassmakers could have made curved glass in the ’30s, perhaps this is how they might have designed it. Nothing radical, it just follows the curve of cowl and interior body reveal. The two rows of three louvers create a simple detail that’s like an echo-three-three-three-three. I’ve never seen any side panel like it anywhere. The reverse angle of the megaphone-style exhaust tips pick up the opposite angle of the gas tank cover, and the exhaust note from the small-block Chevy is quiet enough that my wife Linda and I can have a conversation.
“I still have memories of that chopped ’33 five-window my dad said no to, and maybe he was right. Looking out of a chopped coupe is like hunkering in a

bunker peeping out the slits. With my roadster, it’s different. It’s being in an ageless roadster surrounded on all sides by the ever-changing mix of elements and the 360-degrees if awareness that goes with it.”HR 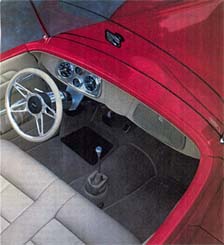 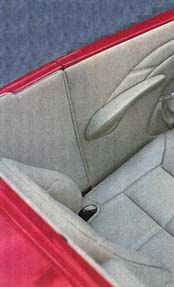 Rich Santana did the tan marine vinyl trim that covers Glide Engineering seat frames and LeCarra steering wheel. Westach gauges are housed in a Hane- line engine-turned dash panel shaped like an Auburn’s. Gennie supplied the shifter, and Stillwater the sounds (when the top’s up).