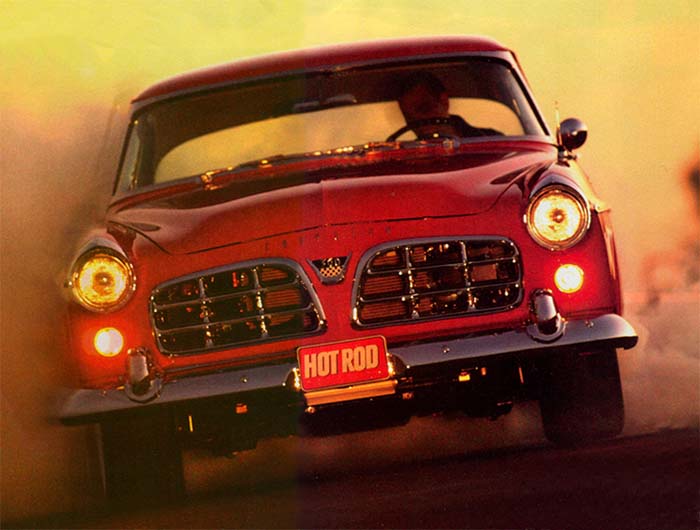 > Alan Kalter’s retina-burning Tango Red C-300 erupts like a time capsule from the dawn of the nuclear age, but under the cozy ’50s sheetmetal lurks the heart of a beast.

he history of Chrysler’s 300 series cars is a convoluted one, with many starts and stops over the past half-century. It began in 1955 when the company dropped a dual-carbed 331ci Hemiâ€”the most powerful production V-8 engine of its dayâ€”into a two-door Chrysler Windsor along with the egg-crate grille from the up-market Imperial and a few extra bits of brightwork trim. The result was a C-300, a luxury coupe with 300 hp. Arriving nearly a decade ahead of Pontiac’s GTO, it was arguably the first American musclecar and unquestionably the progenitor of current luxury sport sedans such as the Cadillac

CTS-V, the BMW M5, and it’s own namesake, the latest Chrysler 300C.
The original C-300 was a performance icon of its era, showcasing the abilities of the early Hemi engines on the hard-packed sands of Daytona Beach. It was there in 1955 that a C-300 posted a 127.580-mph two-way average in the flying mile, more than 7 mph faster that it nearest competitor. In the hands of pioneering NASCAR team owner Carl Kiekafer, the C-300 went on to win the ’55 NASCAR Grand National Championship, a feat repeated by its 300B sibling in 1956.
The C-300 and 300B were followed by the seminal 300C of 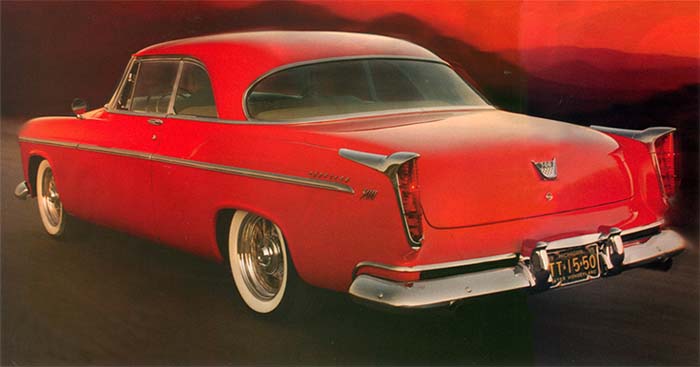 > In case anyone’s horrified by the thought that Kalter “cut up” a rare survivor, the cutout for a second exhaust tip is only physical alteration to the stock C-300 body. 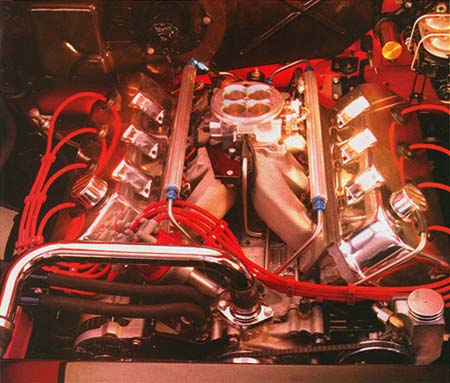 1957, which defined Chrysler styling in the late ’50s with its swoopy, jet-age fins and optional 390hp, 392ci Hemi. The letter-series 300s ran through the alphabet for the next eight years, skipping the letter I and concluding with the 300L in 1965. By the mid ’60s, the 300’s performance receded as Hemi and Six-Pack-powered Road Runners, Chargers, and Cudas took the forefront. As the years went on, the 300 series gravitated more towards luxury than performance, with later non-letter series iterations based on the whale-like proportions of Chrysler’s fullsize sedans and powered by various pedestrian versions of the RB-series big-block
>The all-aluminum 528ci Indy Cylinder Heads Street Legend Hemi was originally ordered with a carburetor, but when it proved to be un-street friendly, it was sent back to Indy to be converted to fuel injection using an ACCEL DFI system.

wedge engine. The 300 nameplate was mothballed in 1971 but made an unfortunate one-year reappearance in 1979 as a Cordoba trim option. It lay dormant for another 20 years until it was resurrected in 1999 with the DaimlerChrysler LHS-based 300M. This front-driver employed DaimlerChrysler’s unique cab-forward architecture, but despite being named Motor Trend’s 1999 Car of the Year, it did nothing to further the 200 series’ reputation. Then in 2005, the 300 series returned gloriously to its roots thanks to the automaker’s merger with Diamler-Benz, reincarnating into the 5.7L Hemi-powered rear-wheel-drive Chrysler 300C, a car that is truly a spiritual descendant of the original C-300, especially in its 425hp SRT-8 form.
As a gearhead growing up in Detroit, Alan Kalter followed all these developments with interest, mostly through the pages of HOT ROD Magazine, which he began reading in the late ’50s. The original C-300 captured his young imagination, and being part of the age group on the leading edge of the musclecar generation, it held a strong appeal when he decided a few years ago to build a hot rod. Now a high-powered Detroit advertising executive whose company has handled big-name accounts as diverse as Mazda, BFGoodrich, and Quaker State, Kalter had the means to build a car with a near-limit-less budget, but what he really wanted was something he could drive and enjoy regularly, not merely admire as it rotated on an indoor platform.
Kalter credits his wife for helping him chose to build a C-300. While attending Detroit’s Woodward Dream Cruise a few years ago, the couple came upon a C-300 in Chrysler’s display. She said, “This is the car you should restore,” Kalter recalls. Armed with permissions from the boss, he set out to find a suitable candidate.
Locating a pristine C-300 wasn’t simple, as only 1,725 were built in 1955 and just a couple hundred of them are believed to have survived. 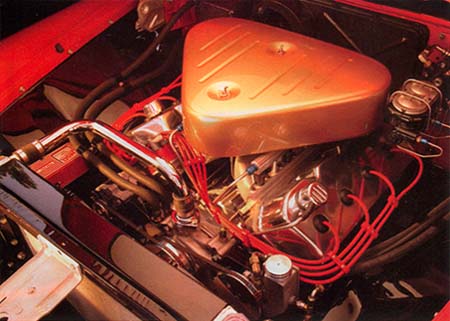 > A custom-fabbed air-filter box mimics the styling of the C-300’s original.

The C-300 Kalter eventually found was owned by a collector in Palm Springs, California, and had fewer than 30,000 original miles on the odometer. The recipient of a mid-level restoration in the late ’60s or early ’70s, it had been featured in several musclecar books, and as clean, unmolested example but not a true survivor,it was a good foundation for a project. According to Randy Clark of Hot Rods & Custom Stuff in Escondido, California, which performed the restoration and modifications, when the former owner dropped the car off at his shop, Clark was under strict orders from Kalter not to even hint at the possibility that any non-stock modifications might be in store. He was instructed to say only that he had been hired to do a “pre-shipping” inspection. “Don’t tell the guy we’re going to cut it up,” Clark says Kalter told him.
Of course the plan was never really to cut it up and the result can hardly be called that, but after putting a few shakedown miles on the C-300, Kalter says “the memories were better than the reality. It floated all over the road. How was that car running [those speeds] at Daytona?” Although Kalter believes the C-300’s styling holds its own in 2005, modern performance standards had far surpassed its abilities. “Back in the ’50s, these cars were known as Beautiful Brutes. It was still beautiful in 2005, but I wanted to give it an ’05 version of the

brute.” The plan he worked out with Clark called for retaining an appearance as close as possible to stock but with performance that would live up to the C-300’s reputation.
Although purists might cringe at the thought of pulling apart an original C-300, dropping in a 720hp all-aluminum Hemi with a 727 TorqueFlite and a Gear Vendors overdrive, and then grafting on the front suspension from a Chevy Caprice, the reality is that Clark and Kalter’s creation is unerringly faithful to the original. The only noticeable external modifications are cutouts in the rear bumper for dual 3-inch exhaust tips and the replacement of the original 15-inch wire wheels with 17-inch replicas. Beyond that, the rest of the car, including the luxurious interior, was restored to high concours standards. Under the hood it’s a different story. The original plan was to upgrade the engine, drivetrain, and suspension but leave the rest of the car untouched.
To provide improved handling and absorb the abuses of the car’s 5,000-pound curb weight, Clark looked beyond the usual street-rod suspension systems, most of which are based on the Mustang II front suspension, a system not exactly known for either great handling or weight capacity. Clark instead wanted to use a traditional worm-gear steering box and centerlink arrangement, which he felt was better 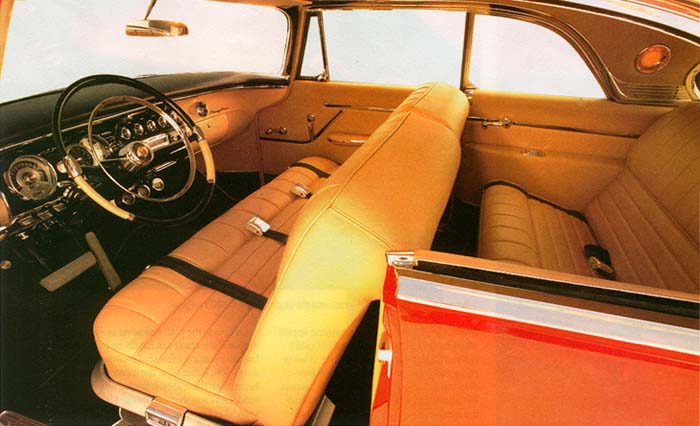 suited to a heavy car than a delicated street-rod rack-and-pinion. His quest for a good-handling big-car suspension led him to the front clip from a ’95 Chevy Caprice, a platform that is well-known for its durability under millions of taxicabs and police cruisers. To fit the Caprice guts under the C-300’s sheetmetal, Clark cut the stock suspension off the Chrysler’s frame,narrowed the Caprice clip by removing a couple of inches from the center of the main crossmember, and grafted it back onto the 300’s framerails.
Kalter briefly considered a Viper V-10 swap but opted to maintain the car’s Hemi-powered lineage, since that engine “has defined Chrysler performance even through to today.” A carbureted 528ci all-aluminum Hemi crate engine was ordered from Indy Cylinder Heads and installed by the time Kalter came out from Detriot to drive the upgraded C-300 for a second time. He put about 100 miles on it and came back with three requests: “fuel-inject it, tear it apart, and paint it red,” Clark recalls. “[The carbed engine] was just a monster and too rough leaving stoplights,” Clark says. “We should have gone with fuel injection to begin with.”
So began a concours-grade frame-off restoration that required purchasing two parts cars just to acquire several unobtainium trim pieces, a new 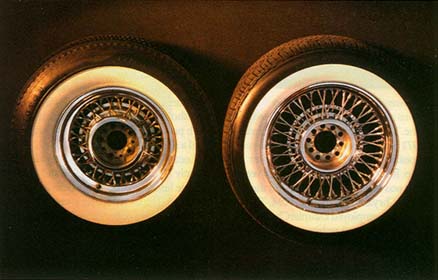 windshield, and replacements for a few other unusuable items. The engine was set back to Indy to be converted to EFI, and the body was stripped and repainted its original Tango Red. “We got to build that car the way you want to build a car,” Clark says of the process that involved assembling the components, working out the bugs, tearing it apart, and reassembling it from scratch. “We don’t get to do that very often. But the result is that this will be a great car for years to come.” Maybe even the greatest Chrysler 300 ever.

> Top: The plush leather-covered bench seats are recontoured for more comfort and seatbelts have been added, but the C-300’s interior is otherwise stock appearing with a few modern upgrades, including power windows sourced from a vintage Imperial. > Above: The 17-inch Wheel Vintiques Nostalgia Wire wheels (right) are near-exact duplicates of the original 15-inch wheels (left), adding to the concours-correct effect. The wide whites are from the Whitewall

STYLE
Body: It’s all stock with the exception of a slight modification to the rear bumper to clear the dual exhaust tips.
Interior: The interior is so completely stock that only the most knowledgeable C-300 expert would notice the slightly recontoured bench seats designed to hug the occupants a bit more snugly than the stock cushions, upgraded gauges, a modified shift gate, and the Alpine CD changer hidden in the glovebox. The only other interior modification is the adaptation of Chrysler Imperial Power-window mechanisms to work with the stock manual window cranks.
Paint: It’s PPG ’55 Chrysler Tango Red by Hot Rods & Custom Stuff.

> Top: A ’95 Impala front frame stub was mated to the stock ’55 Chrysler chassis to give the car less spooky handling. > Middle: The Indy Cylinder Heads 528ci crate Hemi makes 720 hp. That should suffice. 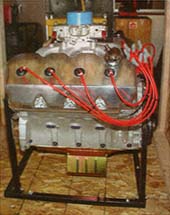 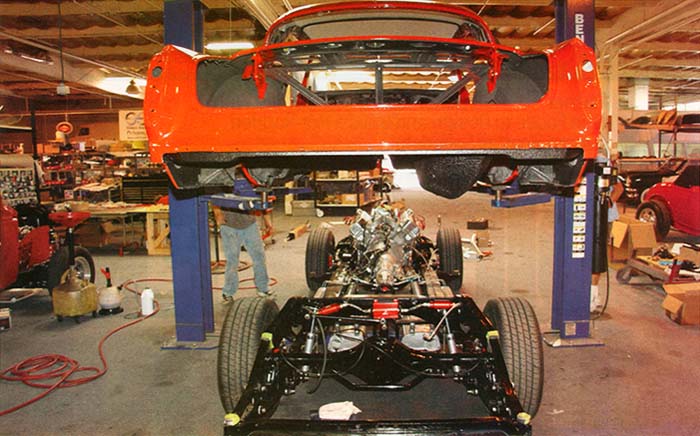