Respect your elders. That’s what we’ve been taught, but when your elders are the staffmembers of Hot Rod magazine, then to hell with respect-it’s hard enough just to keep
up with them. It’s even harder when they take one of the hottest trucks ever, an all-new 2000 Dodge Dakota Quad Cab, and stuff it with 528 ci of legendary, tire-roasting Hemi power.

We maintain the utmost respect for our Hot Rod brethren, but we’re having a difficult time not being jealous of their bitchin’ Dodge Dakota. Built for the ’99 Special Equipment Market Association (SEMA) extravaganza, Hot Rod’s Dakota Project-and our envy of it-began with the Hemi roaring under the hood.

For more than 50 years, Hot Rod has been the source of inspiration for speed freaks and motorheads around the world. It only makes sense that when a handful of specially selected automotive publications was given early-production Dakota Quads to revamp, the crew at Hot Rod would develop a game plan to shoehorn a gigantic 528 crate Hemi into its midsize pickup. Once the unsuspecting little truck was delivered, Hot Rod turned it over one of the best customizing shops in the country: Troy Trepanier’s Rad Rides by Troy in Manteno,
Illinois. The Hot Rod gang had one major requirement for Troy during the transformation: Make all the installations look factory. And that’s about as easy as getting 10 pounds of walnuts into a5 pound bag.

Troy met and exceeded Hot Rod’s requirements. He created pieces that would make even the Dodge engineers wonder whether they offer an optional Street Hemi package. The crate Hemi was massaged to fit the cramped engine bay on a set of custom motor mounts. It runs with a ’66 Street Hemi intake manifold that was modified for sequential multipoint injection on the top, and it breathes out of a set of custom headers, each of which is made of more than 30 handfit sections. Backing up the mill is a combination 727 Torqueflite automatic trans and gear-splitting Gear Vendors 23-percent overdrive. This setup easily handles the 640 hp on tap while scratching rubber in all six gears and delivering respectable mileage figures.

Squeezed tighter than five face-lifts, this Hemi uses every square inch of the Dakota’s engine
compartment. The 528ci monster was installed to look like it came right off the assembly line this way. The ’66 Street Hemi dual-carb manifold fit with a Blower Drive Service-prepped sequential multipoint Speed Pro EFI brings a ’60s muscle image to the present day.

Back in the good ol’ days, mileage was the last concern for a Hemi-equipped vehicle, but contemporary sensibilities require that protection of our natural resources be considered. To keep the truck from requiring gas stops every other block, an over/under drive unit from Gear Vendors keeps fill-ups to a minimum. The gear-splitting add-on to the 727 Torqueflite trans enhances the enjoyment of the driving experience when you chirp the tires six times going up through the gears.

Rad Rides by Troy kept with the strict requirement for an OEM appearance for the Hemi installation. A custom crossmember and oil pan were fabricated that would even fool factory workers if the this truck were dropped into the Quad Cab assembly line. 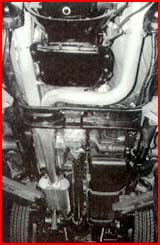 The masterful fit blends the new exhaust system into the nearly stockchassis. The custom headers were built with more than 30 pieces handfit into each assembly.

The whole system, including the 70 series Flowmaster muffler, was HPC-coated for a durable, long-lasting finish. 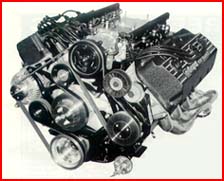 The engine has to be viewed on the engine stand in order to appreciate the engineering feat of setting up the serpentine belt to run all the accessories. All the brackets and pulleys were required to portray a factory appearance; this setup looks 100 percent OEM. 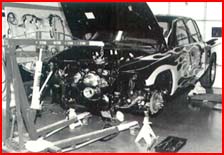 This was the moment when the planets aligned perfectly. The big chunk-o-Hemi rests snugly in its new home. You can see that the flames had already been sprayed on and buffed out, and the factorylike wiring harness was ready for installation.

This truck was built to run, and Hot Rod’s plans include going the distance from California to Florida on Hot Rod Power Tour 2000 (June 1-10; call 800/353-0918 to register). We hope we can thumb a ride in the Hemi Quad Cab for part of the journey.