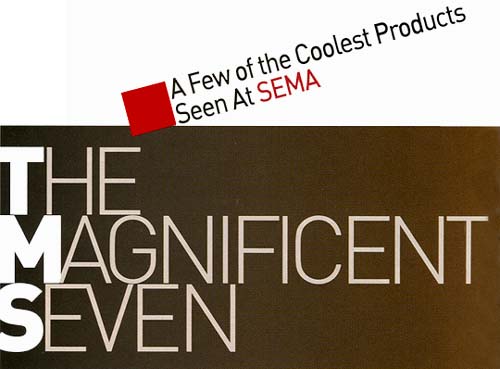 Market Association convention is certainly the biggest—and arguably the best. Held each year in the Las Vegas Convention Center, a venue that’s about the size of Rhode Island, the show is as lavish, glitzy and overwhelming as the city that hosts it.

Simply called SEMA by most, this is where the heavy hitters in the industry come to display their wares. And with 1,400 exhibitors, 14 miles of aisles covering 2 million-plus square feet of floor space, there’s a lot on display. But despite the overwhelming nature of the event, not to mention the fact that there were thousands of noteworthy products on display, we had a mandate. Editor Brian Brennan directed us to come up with what we considered the six best new street rod components at SEMA ’04. It would be tough to narrow all that cool stuff down to a half-dozen items, but with the capable assistance of our new guy, Ryan Manson, I was confident we could do it. Well, we got close anyhow. Would you settle for seven? SR

Ever wish the ratio in that old TH350 tranny were a little closer? Or perhaps just a little taller gear at the top end would be nice. Well, my friends, you’re in luck, for Gear Vendors new Auto Shift Sequencer can do that and then some. Working in conjunction with their under/overdrive unit, the Shift Sequencer has the ability to “split” the stock gear ratios of any automatic transmission. Consisting of the computer module and shifter position sensor, the Gear Vendors Auto Shift Sequencer reads the position of the shift lever, and in relation to the rpm reading from the tach signal, automatically shifts the under/overdrive unit accordingly. This gives a much tighter gear ratio in all automatic transmissions, as well as an additional overdrive gear. The Shift Sequencer and under/overdrive unit can also be controlled manually for performance gear splitting, or can be set to auto and allow the driver a hands-free driving experience. Obviously, the biggest advantage of the Gear Vendors system is the gear-splitting ability it has. Bringing the gear ratio in closer keeps the motor in a tighter rpm range, so less time is spent at rpms, where the motor makes less power. This is an obvious advantage in not only street-driven

cars but also in race applications. The simple problem with all automatic transmissions is the large gap between gears. This cannot be fixed by simply making the gears lower or taller, because the gap is still there. By splitting the gear ratios, the large gap is gone, the motor can maintain engine speed much closer to where it should be, and the driver has full control of when the car shifts or doesn’t shift. Take a look at the gear chart and you can get an idea of how much closer the Gear Vendors unit brings the ratios together. SR

Want the optimum gear for virtually every situation? If you said yes and your rod has a 350 Turbo transmission, Gear Vendors has the answer.