To the uninitiated, this may look like the General Lee ’69 Charger featured in varying numbers of “The Dukes of Hazzard” television show. A closer review tells of an even greater historical connection. Xtreme Lee is as much a statement of intent as it is the car’s moniker, and when you’re pressed into the seats, there’s little question it lives up to its name.

WHEN “THE DUKES OF HAZZARD” FIRT CAME ON THE AIR, KENNY WAYNE SHEPHERD WAS ONLY 2 YEARS OLD. BUT LIKE SO MANY KIDS ACROSS AMERICA WHO FOLLOWED THE DUKES’ FAMILY ANTAICS, HE DEVELOPED A STRONG AFFINITY FOR THE GENERAL LEE, AS WELL AS CARS IN GENERAL.

While over a decade would pass before he was actually driving, Shepherd was well along by that time in his understanding and mastery of guitars and the blues. As he explored his craft in the company of many highly respected blues players, his talents soon became obvious to many.

Following a succession of concert tours and blues/rock

albumsâ€”including his first platinum album while still in high schoolâ€”Shepherd’s commitment and contribution to musical history has become the stuff of legend. Just check out his latest album, “10 Days Out: Blues from the Backroads,” and you’ll know why this is true.

Strangely enough, while it’s easy to see Shepherd and other musicians exploring the gifted world of tonality and song, it’s often difficult to picture them doing anything else. Then again, if you consider Jeff Beck, Eric Clapton, Billy F. Gibbons, Jimmy Vaughn and other musical innovators who look to their automotive interest for relaxation, it’s not so

First seen by millions of viewers as the car came together on cable’s “Rides” television show, Shepherd’s Xtreme Lee reflects his affection for “The Dukes of Hazzard” days and, more to the point, his affinity for Mopars. Between concert dates and other musical commitments, Shepherd spends as much time possible working with the crew at Year One on his latest project, a Plymouth Duster. Yet because of the exposure that’s come before, as well as the images shown here, this ’69 Charger still provides us a historical connection between one great guitarist and our world

After discussing the broad strokes of the General Lee project with Shannon Hudson, owner of Redline Gauge Works, along with team members from Picture Car Warehouse, Shepherd left the details to those who specialize in such efforts. While this car would never see the extremes of all the cars that inspired its creation, the historical connection to the General Lee Charger is seen, both visually and metaphorically, as this is meant to be only a representation of those cars and what they stood for. They crashed many cars for TV (see side-bar), so numerous General Lee cars were built for show stunts.

To provide a solid foundation for this project, the stock chassis was reinforced with Magnum Force subframe connectors, which effectively stiffen it to closely maintain correct suspension geometry, even when driven to the limit. Further improvements came by way of a pair of Fat Man Fabrications dropped spindles, joined by Magnum Force tubular control arms and Pure Vision tie-rod ends at either end of a Steer & Gear steering box. To fully enable the chassis in the most trying of conditions, a Hydratrech brake system makes use of the nicely styled 18×8-inch Budnik wheels and 245/40-18 BFGoodrich g-Force T/A radials.

Look between the 19×10-inch wheels and 285/35-19 g-Force T/As filling out the rear fenders and you find an 8-3/4-inch Mopar rear axle from Randy’s Ring & Pinion. It turns 355:1 gears maintained with a Sure-Grip positraction. Other rear components intended to plant rubber include a pair of Eaton rear leaf springs that drop the ride height 1 inch and another pair of KYB shocks for comfort and control.

Good thing the chassis is stout, because the drivetrain from Mopar Engines West (MEW) would overwhelm anything less, this 500ci Dodge builds massive amounts of torque. Bored to house larger JE forged-aluminum pistons, the block was also machined to accept a longer stroke, created using an Eagle Crankshaft and rods. Once the short block was ready for the inevitable, a pair of Edelbrock aluminum cylinder heads was ported by Angie at MEW and then fitted with a Comp Cams valvetrain to ensure absolute reliability.

To make the most of this combination, one of Edelbrock’s most popular Mopar intake manifolds was joined with the various electronic fuel-injection components in an effort to maximize power and improve driveability. Once the combustion process is kicked off by the Electromotive ignition, a pair of TTI exhaust headers sends spent fumes through a custom stainless steel exhaust system sporting a familiar Mopar note.

Other high points of this thundering drivetrain include a pair of custom Plymouth B1 valve covers, a Milodon oiling system and oil pan, a selection of special fasteners and brackets and loads of subtle yet effective detailing that suits the Xtreme Lee quite well. Beyond the engine is a fully reworked 727 Tourqueflite, reworked by Cope Racing Transmissions. It uses a PTC 3,000-rpm stall-speed converter and a B&M shifter.

Interior touches recall the basic look of an original ’69 Dodge Charger, although upon closer review you find that the quality of materials has been greatly enhanced. In the hands of Jerry Noone, the beautiful suede and lether hides were perfectly fitted to the seats, along with Bentley carpet on the floor which provides an entirely different level of sophistication. Additional upgrades include, naturally, a top-grade audio system incorporating an Eclipse touch-screen head unit feeding remote amps and an array of speakers suited to the owner’s musical passion. Add to this an intergrated satellite navigation system housed within the same in-dash unit, along with a custom set of instruments, and 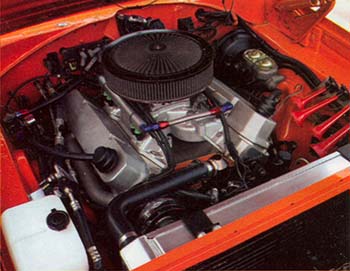 Punched out to 500 ci and filled with some of the best internal components available, this Mopar wedge engine produces in excess of 585 hp at 6,500 rpm. Mated to an extremely capable Torqueflite transmission, this car has all the punch necessary to cross a ravine or burn rubber over the horizon 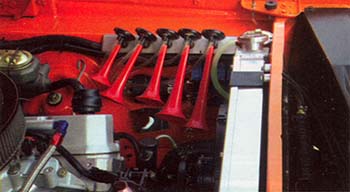 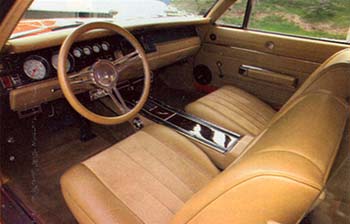 While the interior re-creates the appeal of the General Lee Chargers, a rich combination of suede, leather and wool has been tastefully integrated by Jerry Noone to provide more comforting surroundings. The high-powered Eclipse audio and navigational system was wired by Dave Garret and tuned to meet the standards of one who knows about sound. Obligatory options include a CB unit and Fender logo.

Painted the same ’75 Corvette Flame Orange hue used on every one of the original General Lee Chargers and adorned with stylized lettering and numbers, along with its own torn version of the Rebel flag on the roof, Kenny Wayne Shepperd’s cool Charger actually lives up to its image.

there’s no shortage of information input.

The Corvette Flame Orange coating from DuPont is the same color used on every official General Lee Charger seen on TV, although this finish shines much brighter than any of its predecessors. Painted by Bamma at Picture Car Warehouse, the paint scheme is complete, right down to the numbers and other accents, including the beautifully air-brushed wind-torn Rebel flag on the roof and the Xtreme Lee callouts about the doors. And, if you’re thinking the flag represents anything negative, it’s all about the rebel spirit that has made this country what it is today.

While it may only be a coincidence that guitar greats like Kenny Wayne Shepherd and his counterparts embrace history – whether it’s in their music or their cars – there’s no question that they make as much history as they hold dear, note by note and car by car. CS 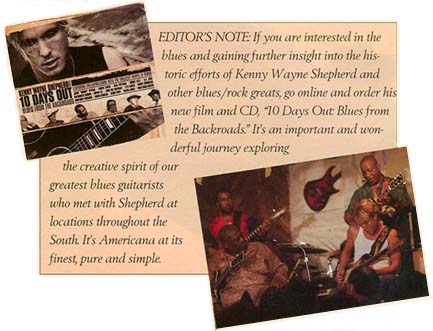 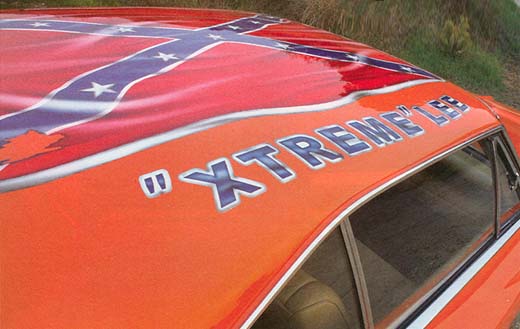 MORE ABOUT THE CAR THAN THE PLOT, THE ’69 DODGE AFFECTIONATELY KNOWN AS GENERAL LEE FOREVER HOOKED GENERATIONS OF YOUNGSTERS AND PARENTS ALIKE, AS THEY WATCHED BO AND LUKE DUKE SLIDE, SPIN AND JUMP THE SEEMINGLY INDESTRUCTIBLE MACHINE EPISODE AFTER EPISODE. IN ALL, 309 GENERAL LEE CHARGERS WERE EFFECTIVELY USED UP BETWEEN 1979 AND 1985, AND IN THE END, ONLY 23 OF THE ORIGINAL CARS ARE STILL INTACT.

Â Â Â Â Â  Considering how damaging the seemingly endless succession of stunts were to these cars, it’s a wonder any Chargers remain at all. All too often viewers could see the cars actually bending as they tested the endurance of the stuntmenâ€”or should we say crazy men! Obviously, this kind of treatment immediately and permanently put the cars out of action. Therefore, three or more cars were often finished off shooting a single episode.

This led to the use of both ’69 and ’68 cars (modified to look like ’69 Chargers) to keep up with the demand for these cars and to lower expenses. Yet when you consider the mileage achieved by those flying Chargers (“The Dukes of Hazzard” is still shown today on CMT), and the number of people who came to appreciate these cars in general, as a direct result of that exposure, those were Mopars well spent. 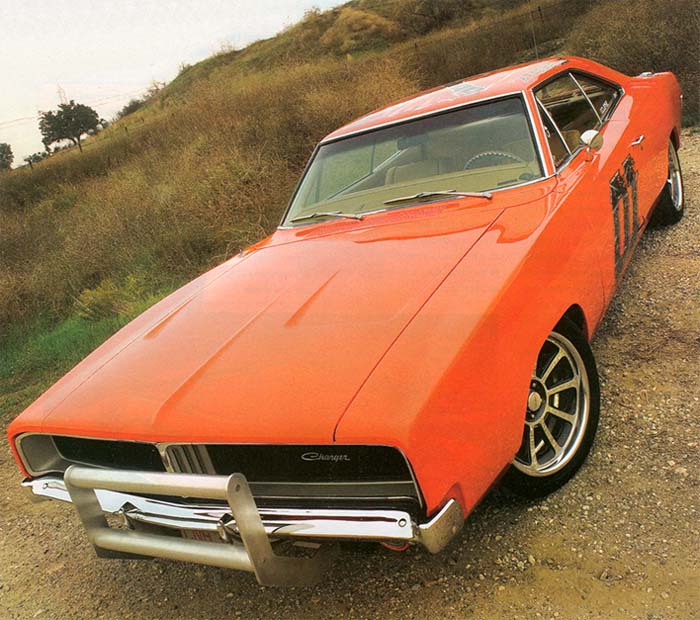