Bob Reynolds of Paramount, California, has a problem in his hands.As the owner of the immaculate red ’69 Chevy seen on these pages, it would seem that Bob has it made in the world of custom trucks. After all, what sport truck enthusiast wouldn’t be damn proud to own and drive such a gorgeous truck? Bob is proud of this truck, of course. His problem is that he really doesn’t know why he should build another custom truck. Ever. His ’69 is an immensely enjoyable daily driver that’s clean enough to turn heads and win a lot of trophies, too.

Starting out just a year ago with a worn-out, $1000 ’69 Chevy Pickup, Bob took his rolling chassis to Quality Automotive in Torrance, California, for suspension modification. The front end was lowered 4 inches with Belltech 2-inch drop spindles and 2-inch shorter coil springs. The rear was lowered 6 inches with a C-notch and Firestone airbags. All four corners were fitted with KYB gas shocks and 17-inch Center Line wheels. Low-profile Nitto Extreme ZR tires measuring P255/40ZR17 were the rubber of choice.

The tired stock powerplant was tossed in favor of a Quality Automotive rebuilt 427ci V-8 plucked from a ’68 Corvette. The 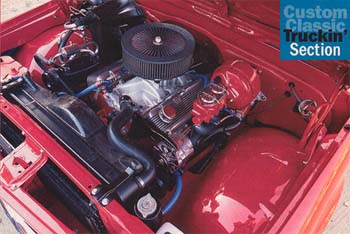 Here’s the beef. Quality Automotive in Torrance, California, built this clean and stout 417ci big-block for Bob Reynolds. The mill is mated to a modified Turbo 400 transmission and propels the Jackhammer down the quarter-mile in 15.5 seconds with a trap speed of 88 mph. 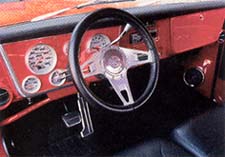 Having completed the rolling chassis and drivetrain on his ’69, Bob decided to 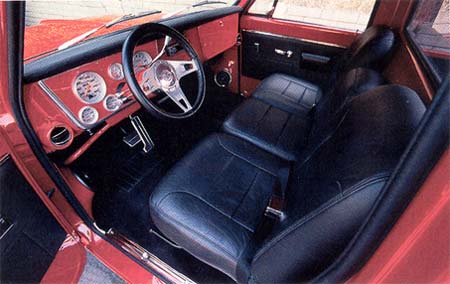 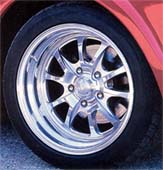 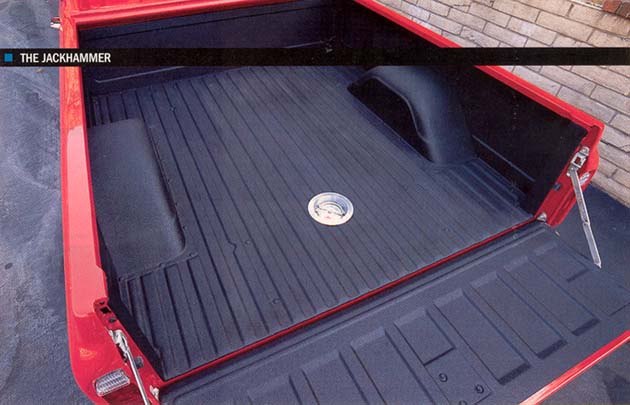 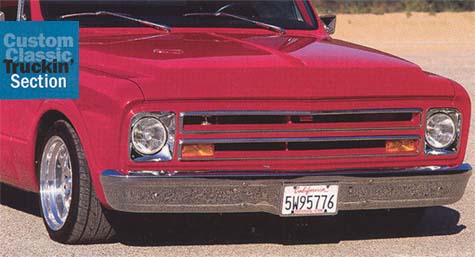 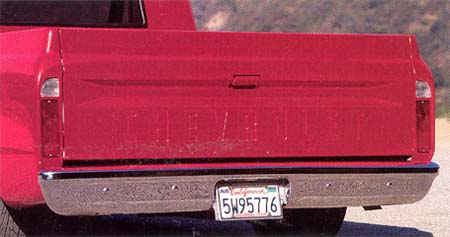 make some sheetmetal modifications to the exterior. He took the truck over to Kustom Prep in Long Beach, California, where a ’67 Chevy shortbed body was fitted on the ’69 frame. The ’67 metal was left mostly stock, but was completely filled, sanded, and smoothed. The truck still retains its stock lights, bumpers, tailgate handle, driprail, and door handles. A 22-gallon JAZ fuel cell was mounted under the bed between the framerails, and the gas filler was moved to the bed floor.

Turning his attention to the interior of his ’67/’69 hybrid, Bob paid a visit to Bellflower Auto Trim in Bellflower, California, where plush back carpet and black leather upholstery were installed in the cab. Bob also installed a custom billet dashpanel that houses a set of Auto Meter Silver Light gauges.

This red ’69 with a ’67 body received a bit of modernization in the bed area with a high-tech Line-X spray-in bedliner. The gas filler in the bed floor added a nice custom touch.

Bob Reynolds chose to retain most of the stock sheetmetal, lights, bumpers, and trim of the Chevy shortbed body. After all the body- and paintwork, the stock components shine like new after-market pieces.

Stock can be good sometimes, as evidenced by the ultra-clean, but mostly stock rear end of Bob’s Chevy. This truck proves you don’t need a roll pan and relocated tailgate handle to qualify as a custom sport truck.

A trip to Al Et Ed’s Autosound in Lakewood, California, yielded a complete custom Alpine audio system. The head unit, amplifiers, and equalizer are all Alpine components. A custom enclosure houses the power amps and a 12-inch subwoofer behind the seats, and each custom kick panel box contains a pair of midrange speakers.

Bob’s completed truck is a bit of an enigma. Even though it retains many of the stock factory components, the ’69 is just custom enough to be a real head-turner on the streets and at shows. The immaculate red bodywork combined with the clean-but-Spartan interior and big-block power make this a truck to remember. Bob has attended a few local car shows since completing his truck and has succeeded in taking home a few Best Truck trophies in the process. Bob estimates he has $15,000 invested in the project not including the original $1,000 purchase price. In addition to show duties, the truck has been so dependable and enjoyable as a daily driver that Bob named it The Jackhammer for its ability to pound through any situation. We think the name is quite fitting. TR