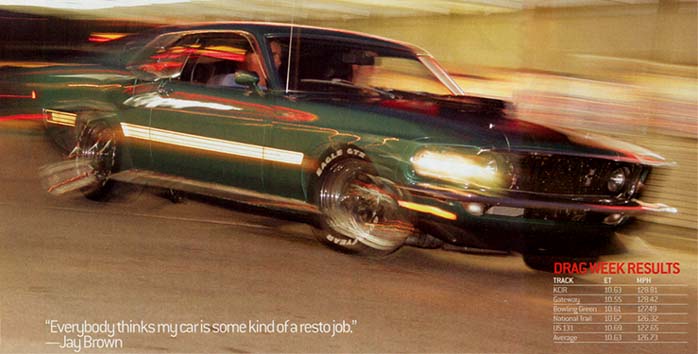 Jay Brown is nuts about FE Fords. How else would you describe a guy who bought his own SuperFlow dyno just so he could dream up and test his own engine creations?
It all started when he purchased a ’68 Shelby GT500 convertible back in 1978. “I fell in love with that 428 and I’ve been an FE guy ever since,” Jay says. And considering that he still owns that Shelby, which he paid $2,800 for, he’s probably got enough equity to more than pay for the dyno.
Jay doesn’t just like the engines, he likes the cars they came in too, and in addition to the Shelby and the R-code Mach1, he has a ’68 Mustang fastback, a tube chassis ’69 Mustang drag car, and a ’69 Galaxy XL convertible, all

with FEs except for the fastback. In addition to the 511ci all-aluminum FE in the Mach 1, he’s got a 1,000hp blow-through-carb supercharged FE, and he’s building a twin-turbo charged aluminum SOHC FE for the drag chassis that he hopes will top 2,000hp. Jay also plans to put together a couple of the spare Shelby aluminum blocks he has back in the shop just to keep his inventory levels up. “Then I’ll be back up to having two FEs for every car, which is where I’m most comfortable at,” says Jay, who is a regular on www.fordfe.com.
Jays Mach 1 won the Naturally Aspirated Big-Block category with a 10.60 average at 126 mph. Along the way he earned the HOT ROD staff’s

unofficial ultimate sleeper award. Backed by a C4 with a Gear Vendors overdrive and a 9-inch with 4.11s, the big FE was stone reliable thanks to the mild lobes of a Comp Cams Xtreme Energy street roller, although Jay brought a complete replacement valvetrain in his tagalong trailer just in case.
Jay’s winter project is to install that Super-Flow in his massive 7,500 square-foot shop at his home near Minneapolis, and the first engine to run on it will probably be a 541-incher he plans to build by stroking the Mach 1’s 511. He’s shooting for 800 hp and 10-flat. Check back next year.

> Jay craftily adapted the R-code Mach 1’s original shaker hoodscoop to work with the significantly taller single-plane intake manifold. The next time around it will be a little tougher to make the shaker work, since he’s going to swap in a revised version of the al-aluminum FE that displaces 541 ci and is crowned with a Dominator. 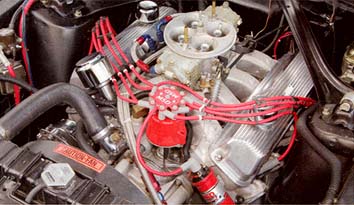 > He acts surprised that people think his Mach 1 is a resto job, but take one look at the interior and wonder why. Even the shifter is stock, though he does have a set of Auto Meter gauges nested down in the passenger-area footwell. The swing-out door bars are a must for a car that sees this much street use. 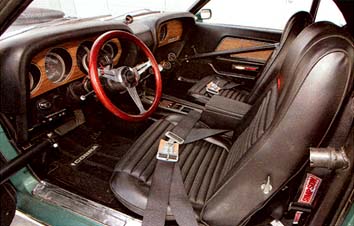 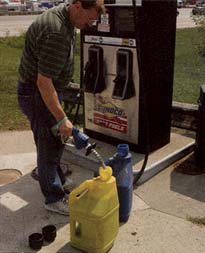 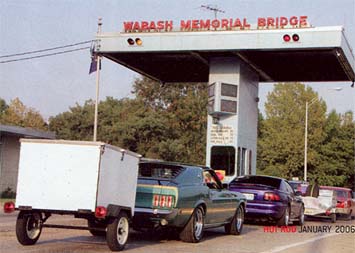 > Finding race gas was an iffy proposition for those like Jay who chose to make their dragstrip runs with a couple of gallons of the good stuff mixed in with pump gas. He filled a couple of jugs with 110 at a Sunoco station just a few miles form National Trail Raceway near Columbus, Ohio.

What Jay Brown accomplished with his Mach 1 is an inspiration to every musclecar drag racer, and the car and its driver were favorites of the HOT ROD staff. Not only does this ’69 look virtually stockâ€”even retaining the shaker hood, Magnun 500 wheels, and complete interiorâ€”but it was deadly consistent and virtually flawless to drive, all with an FE engine that’s seen as antiquated by lots of Chevy lemmings. The Gear Vendors Under/Overdrive was also a big part of the car’s success, and with that company

sponsoring Drag Week, something tells us we’ll be seeing more of those units next year.

WHAT HE WON: Rocket Brand also threw 20 gallons of 114-octane gas to the NA Big-Block winner, and MSD gave him a new Digital 6 Plus ignition that will go nicely with one of his FE powerplants. Comp Cams recently relaunched Racing Head Service, and Jay will get his choice of one set of new as-cast aluminum cylinder heads.